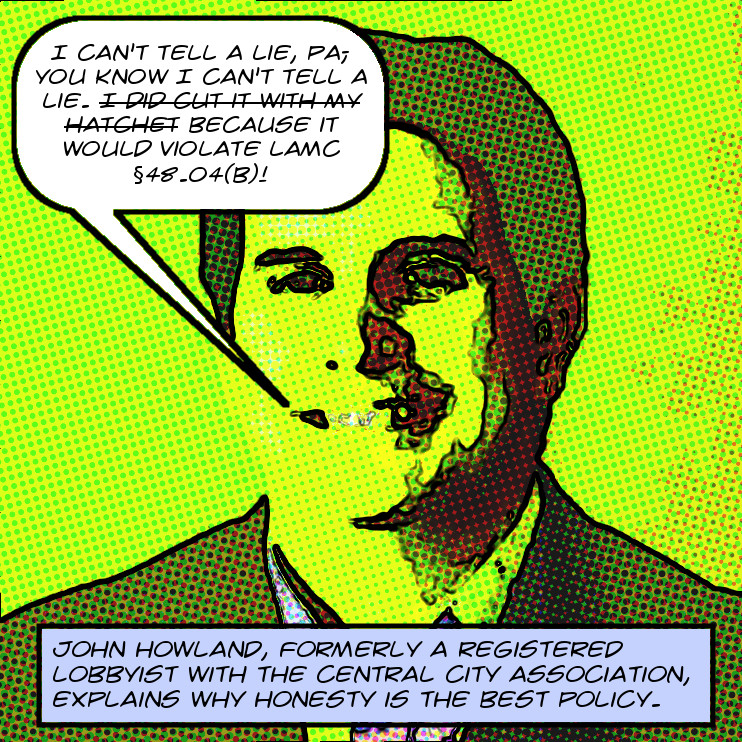 Background: You can read my previous stories on the Skid Row Neighborhood Council formation effort and also see Gale Holland’s article in the Times for a more balanced perspective.

As you may recall, I’ve been tracking the illegal lobbying carried out by and on behalf of various shady downtown zillionaires with the support and connivance of the staff of various downtown business improvement districts in opposition to the Skid Row Neighborhood Council formation effort. As part of their creepy conspiracy, the usual motley crew of zillionaires and zillionaire-identified-groupies showed up at the March 20, 2017 meeting of the Board of Neighborhood Commissioners (affectionately known as BONC) to speak what passes for their minds in zillionairelandia.

In the ordinary course of events, BONC posts audio of their meetings on the open internet, but, for whatever reason, when I took a look a few weeks ago, the March 20 meeting did not appear. After a few weeks worth of pleasant emails with various City employees, though, the audio has now been posted. I also published it on Archive.Org along with a copy of the minutes so you can follow along if you wish.

There’s a lot of interesting stuff in there, some of it inspiring, most of it horrifying in that special spine-tingly manner that glimpses into the seething caucasian-hot liquid id-core of the local politics of resentment are wont to horrify. I plan to write occasionally on episodes from this meeting, as the mood strikes, and today’s story concerns comments by Scott Gray and Debbie Welsch of shadowy zillionaire real estate conspiracy Capital Foresight,1 and shadowy lobbyist-to-the-zillionaires, John Howland.2

The gist of the matter is this, though. Debbie Welsch and Scott Gray told lie after lie, some of them beyond surreal in their fundamental disconnect with reality. On the other hand, John Howland, who at the time of the meeting was employed as a registered lobbyist with CCA, mostly, although he is quite an evil fellow indeed, told the truth. This is arguably less due to his inherent honesty than it is to the fact that registered lobbyists are required to sign a form upon registration acknowledging that they are aware of LAMC §48.04(B), which states that:

No lobbyist or lobbying firm subject to the requirements of the Article shall…[f]raudulently deceive or attempt to deceive any City official with regard to any material fact pertinent to any pending or proposed municipal legislation.

Anyway, after the break you will find embedded audio and transcriptions of the comments of all three of these dimwits, along with as much detailed mockery as I was able to type before I had to run off to the loo to eat lunch backwards​.

Second of all, it’s refreshing to hear Mr. Scott Gray acknowledge that BIDs are part of City government. This, of course, is a hotly contested issue, with BIDs and City government insisting that they are wholly private organizations and the California judiciary and every sane person on the planet insisting that they’re government agencies. How did Scott Gray find himself on the side of the sane? Doesn’t matter, he’ll scurry back over the line as soon as he sees how people are looking at him.

More importantly, though, it’s worth talking a little bit about what he means here. The fact is that the City of Los Angeles loves being lobbied by BIDs. It gives them political cover for any number of repressive or corrupt laws they want to pass, it allows them to funnel contributions into their coffers even more efficiently, and so on.

And the more BIDs there are, the better this system works. The more fragmented BIDs are the harder it is for anyone to oppose them because it’s necessary to deal with dozens of different policies, dozens of different ways of being impossible, dozens of weirdo executive directors, dozens of distinct meetings in dozens of distinct areas of the City, and so on. Normal people don’t have the time. On the other hand, the purpose of DLANC is to get lobbied by zillionaires. The more neighborhood councils there are Downtown, the more meetings there will be for lobbyists to attend, and the more zillionaires will have to pay the lobbyists to get their projects approved.

Anyway, give the whole thing a listen and I’ll be back with more commentary as soon as the queasiness abates.

Debbie Welsch’s Comments: And I’m against the request for a Skid Row Neighborhood Council vote for April 6 due to the following. First of all, it’s against my violation [sic ?!] of contribution in the community cause that’s who I am. I first saw something about it on a social media platform a little over a week ago. And I saw someone named General Jeff ask..um..who..um…was talking about it. And I asked our local business improvement district, the Historic Core. They weren’t notified. I’m also on the board of directors for the Fashion District BID. We weren’t notified as a board or a board member. So there’s no notification. There’s hearsay also that the member seats are already or mostly filled. So again, that violates my rights to be able to vote or be on a council. Um, I can’t vote the normal way that I normally vote, um, like I do an absentee vote, because I have a normal work hour [sic] 8 a.m. to 5 p.m. Monday through Friday. So it’s not solid or fair. This is not a fair notification or voting standards for our forefathers created, which again violates my ability and others’ abilities to fairly contribute to their communities in a reasonable manner and a reasonable time. Thank you.

Scott Gray’s Comments:Hello, I am Scott Gray. I represent Capital Foresight. We own multiple properties throughout Downtown from Little Tokyo to the Historic Core to the Fashion District to the Arts District to the Industrial Warehouse District. There is an upcoming election on April 6 for the secession of Skid Row Housing into its own neighborhood council. We, until about a week, maybe two weeks ago, had no idea, no notification of this election in any form and were not participants in this process in any way. We think this is highly unfair. We represent not only tens, if not hundreds of millions of dollars worth of property, but thousands of residents in our buildings. I will attest we have not received one notification. We’re members of multiple BIDs and we’re executive members of the CCA. Not one of these organizations has ever attempted to reach out to our organization or anyone in our employ about this election. In short, there’s an upcoming election that’s been proposed through a formation committee that we had no knowledge that [it] had existed. We feel that this is an unjust process. We definitely would support opening it up to at least a vote by mail. All of the stakeholders in the affected districts, and it’s not just the fifty blocks of the supposed neighborhood council, it is throughout the entire Downtown. We believe that the DLANC organization as the neighborhood council is the appropriate single board to represent a united Downtown for everyone. If there’s going to be a voice for the homeless, why not have an ad hoc committee specifically designed and set up to address issues reflecting spending money for Proposition H and HHH. Great idea. That’s what should happen. But to divide and fracture Downtown into multiple geographic neighborhood council districts just does not serve the best interests of our city in any way at all. Without proper notification to all of the stakeholders, that’s the business owners, the property owners, the employees, and the residents of all of the properties, not only that we own, but that all of our associates own, this is unfair, and it’s a misrepresentation to the stakeholders of all of Downtown. Let me add that neighborhood councils are not the same as business improvement districts. Business improvement districts, like the Historic Core, like the Financial District, [sic] like South Park, like the Arts District, like the Fashion District. They serve a different purpose within the City government. I urge you to postpone if not eliminate this election for improper notification among other reasons that you’ll hear about shortly. Thank you.

John Howland’s Comments:I’m John Howland with the Central City Association. Skid Row Neighborhood Council must be approved by Downtown Los Angeles stakeholders. The election is currently scheduled to take place on Thursday, April 6. Right now, votes must be cast in person at the James Wood Community Center. All Downtown stakeholders should weigh in on this proposal, as it would remove the Skid Row neighborhood from the DLANC and the HCNC. CCA supports voter engagement. We are concerned that Downtown Los Angeles stakeholders will not participate in this vote due to a lack of notification, a limited opportunity for a vote, and a solitary polling location. Thank you.

Image of John Howland is from an original to be found here and this highly tranformatively used version is now, it seems, ©2017 MichaelKohlhaas.Org. The words in his mouth were (mostly) made up by Mason Locke “Parson” Weems and unceremoniously and mendaciously placed in the mouth of George Washington by that old con man himself. Cheerio, friends! And thanks for reading the fine print!