Perhaps you recall that I recently put a bunch of transaction records from the South Park BID up on Archive.Org because they’re both intrinsically interesting and also exceedingly useful in estimating how much shadowy BID consultant Tara Devine gets paid to drop yet another BID on our fair City; about $80,000, if my chain of inference is correct. Well, just recently I received SPBID’s transaction log from July 1, 2016 through January 31, 2017, which adds another $17,635 to Tara Devine’s running total. This makes more than $95,000 that the South Park BIDdies have paid Tara Devine. It’s probably not all for their BID renewal, though. As I reported the other day, the two South Park BIDs1 are evidently merging into one big bad BID, and Tara Devine is shepherding them through the sausage factory City Clerk’s office, so probably that’s mostly what she’s being paid for at this point. I have more requests in that may help us sort out the details.

And additionally I finally prepared and uploaded a bunch of documents concerning the relationship between the Downtown Center BID and PATH2, which is a private group that contracts with a lot of BIDs and even Council Districts to provide something they call “outreach” to homeless people. Turn the page for links to a few specific items with some brief commentary. 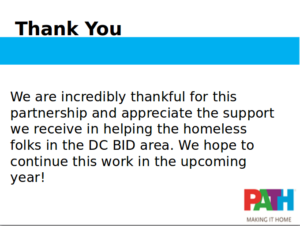 Image of the Queen of Downtown is a modification of a public record and I got the original from here.