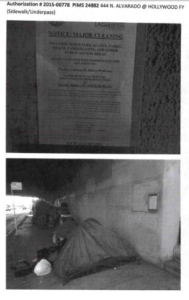 LA Sanitation Homeless Encampment Materials. Note the crappy quality of these things. That’s because, even though CPRA says both clearly and explicitly that if records are stored electronically they must be released in an electronic format, not only does LASAN refuse to do this, insisting on printing these low quality black and white copies from the electronic color originals, but they won’t even answer my emails about this, even though CPRA also compels them to answer. Ah, sigh, right?

BID Feasibility Reports. It seems that BID consultants are supposed to prepare these reports before the BID formation process starts. It also seems that this rule is not enforced. When I asked Miranda Paster for all of these, she sent me only these two: San Pedro and Pacoima. Perhaps these are all there are, in which case yet another rule is being broken.

And finally, turn the page for the City of LA’s answer to the Save Valley Village vote-fixing lawsuit!

And the reply is worth reading, although the initial complaint is much more interesting. Essentially the City says (a) we didn’t do it, (b) even if we did it, no proof is presented, (c) even if we did it and there is proof they’re suing the wrong parties and (d) even if we did it and there is proof and they’re suing the right parties, those parties are immune from suit. So that’s not unexpected, and, although I’m the second least cynical person I know,1 I expect this suit is not going to get much farther. As the City2 says when arguing that the anti-vote-trading law can’t possibly be read to prohibit the behavior of LA City Council representatives:

Petitioner still cannot compel Councilmembers to exercise their discretion in any particular way. Chaos would result if a resident or voter could successfully sue an individual legislator for his or her voting preferences.

And the argument that chaos would result if a law were read a certain way is actually quite often a good reason not to read the law that way. But nevertheless, the Councilmembers are in fact guilty, irrespective of what the law can do. Evidently we need a new law. Or to triple the number of Council Districts. Or something. So that’s the new stuff for tonight, friends!