Previous installments of this series appear here: Part 1 and Part 2


We originally planned to write a full post making fun of Nicole Shahenian’s speech at the May 28, 2015 meeting at Boyle Heights City Hall on the subject of legalized street vending in Los Angeles. On listening to it again, though, we realized that it’s nothing more than the same old nonsense, probably ghost-written by Kerry Morrison, and that writing on it would be a waste of time, space, and electricity. So today we’re concluding our reportage on the May 28 meeting with a brief discussion of the good guys, the white hats, the rays of sunshine, the breaths of fresh air, the actual humans in the room, the supporters of legalized street vending in lovely Los Angeles. In particular we hear from an actual street vendor who supports his family and from badass civil rights lawyer Cynthia Anderson-Barker, who explains why it’s essential to repeal LAMC 42.00(b) because, not only is it not being enforced equitably, it is not actually possible to enforce it equitably.
First up we have a man, whose name we didn’t catch on the audio, who’s one of the street vendors that Kerry Morrison recently mocked in public for claiming that he practices street vending in order to support his family. Listen here or read a transcription after the break. She has complained vociferously in the past and will no doubt complain vociferously in the future about the tone and incivility of those who oppose her iron will, never taking into account that her minions, who are paid to go to these meetings to speak words that, even if she didn’t actually write them, are certainly consistent with every public statement she’s ever made on the issue, are directly attacking people like this speaker, who are trying in the face of massive harassment to feed their families.

She and her minions rank this man’s life and well-being below the putative, delusionally construed rights of their employers not only to own property in Hollywood, to make untold amounts of money in exchange for very little productive labor, and not only that, but to have an extraordinarily immoral amount of control over the social conditions of life in places and neighborhoods where they don’t even live. In the face of this, Kerry Morrison has the audacity to complain about the audience being “uncivil” to her minions? Quel chutzpah, n’est ce pas? Anyway, in his speech, this man makes it clear that he knows that they’re his enemy. And he’s not wrong. They are his enemy. They are our enemies.

By example, for myself, I make ninety dollars a day. And I support my family with that money. … Our life … is very different than yours. Our day is starting at 4 a.m., and we’ll finish at around 9 p.m. for just a few dollars, but it’s OK.


This is the kind of story Kerry Morrison dismisses as an example of speakers “being bused in” in order to all have “the same, the same, um, tune, like ‘I need to be able to sell on the street to support my family.'” We’re impressed in a theoretical way that she can live with herself thinking like that in the face of such testimony, although maybe we could live with ourselves too. Never having thought like that, how would we know? Does she think the guy’s lying? Making up stories to win the right to work 17 hours for 90 dollars? What is she thinking, if anything?


And then comes Cynthia Anderson-Barker, badass civil rights lawyer and board member of the badass civil rights organization the National Lawyers Guild Los Angeles. Their motto proclaims them to be “Dedicated to the Belief That Human Rights Are More Sacred Than Property Interests” And after hearing Cynthia speak, we think they mean it and that if we were the LAPD or the BID Patrol we’d be very frightened of this woman.

“…here’s why street vending should be legalized: there is no possible way for the LAPD to legally enforce that municipal code section 42.00(b). The LAPD has to itemize and inventory each item they confiscate. They have not been doing this. They can be sued for this. We haven’t sued them yet. The same applies to the Department of Health. We’re next going to focus on the way the Department of Health goes through the communities, takes people’s carts, and trashes their items, their forks, their juicers, and their illegal carts. They just confiscate and trash. That’s illegal. So street vending should be legalized.”

Her point, as we understand it (and this is our theory here; please don’t blame our errors on her), is that if the law against street vending is to be enforced in conformity with Fifth Amendment to the United States Constitution‘s admonition that “No person shall … be deprived of life, liberty, or property, without due process of law,” if the LAPD is going to arrest a street vendor with, e.g., 100 ice-cream bars and an ice-cream cart, they have to make a list of the stuff they’re taking and not confiscate and destroy it without affording due process. There’s obviously no way they could do that, even if they wanted to, so it is factually impossible to enforce LAMC 42.00(b) in a constitutional manner. That means that the only possible reason to keep it on the books is its utility in harassing poor people. It’ll never be enforced fairly because it cannot be enforced fairly, so it must be repealed.1 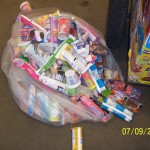 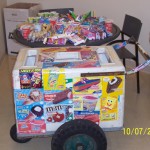 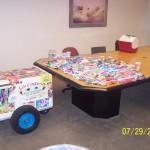 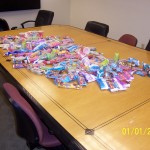 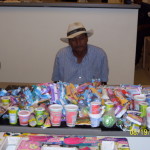 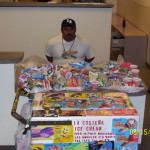 Anderson-Barker doesn’t mention the BID Patrol here, and that’s understandable, given that she only had a minute to speak. But the BID Patrol is a big problem, possibly worse than the LAPD, at least in Hollywood. As you can see from the above pictures, the BID Patrol does arrest street vendors and they do ruin their food. Furthermore, even if the NLG reaches an agreement with the LAPD to stop enforcing LAMC 42.00(b) throughout the city, as they’ve evidently done around MacArthur Park, it won’t necessarily apply to the BID Patrol. According to LAPD Commander Andrew Smith, quoted in the LA Times here, if BID Officers make a citizen’s arrest of someone for committing a misdemeanor, the LAPD will have to accept custody of that person, even if the police commission has instructed them not to enforce the salient law. We certainly hope that whether the NLG settles with or sues the city, they turn their attention to the BID Patrol as well, at least until the abhorrent LAMC 42.00(b) is repealed. We wish Cynthia Anderson-Barker and the NLG-LA Godspeed in their work. They’re like penicillin to the bad case of BIDitis this city’s come down with.

The image of Cynthia Anderson-Barker is a modification of this image on Flickr, which was released by its creator, atmalinga under the CC BY-NC-SA 2.0, and it (the modification) is thereby released here under the same license. More current images of Anderson-Barker are available via this Google image search, but none of them are licensed for reuse. Images of arrested, shackled, and humiliated street vendors were obtained under the CPRA from the HPOA and appear here under whatever reasoning it is that allows public records to be published.