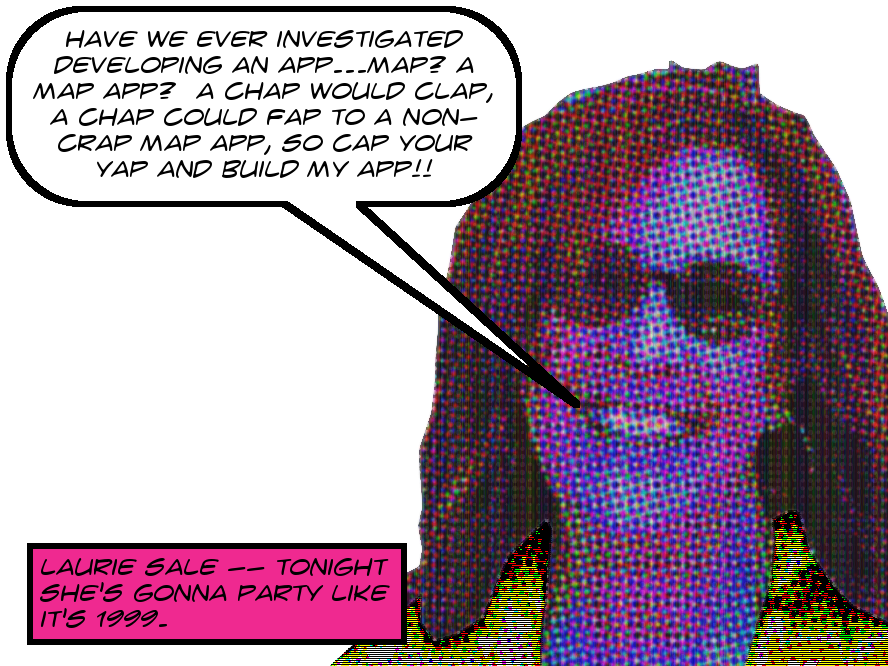 I mean, we spill an awful lot of electrons around here yammering on about the sheer fuck-witted stupidity of our white supremacist BIDdie friends, but somehow the unmitigated bag-of-kidney-stones level dumbness on display at these people’s meetings still has the power to astonish.1 Evidence for this claim? Witness, if you will, this recent meeting of the Fashion District BID‘s freaking marketing committee, kindly recorded for your viewing pleasure2 by one of our long-time correspondents, the mysterious Mr. Mike.

Most of the meeting consisted, as usual, of creak-voiced FDBID Marketrix Extraordinaire Ariana Gomez3 yammering on about web freaking analytics, affinity freaking groups, in-freaking-fluencers, social freaking media freaking blah-de-freaking-blah-blah-blah, and the usual sort of jive one might expect to be emitted by a bunch of BIDdies all hopped up on managerial jargon and an unshakably delusional sense of the depth, value, and intrinsic rightness of their own objectively bizarro world-view. There were at least a couple of non-coma-inducing episodes as well, though!

First, Fashion District Board of Directors member, part-time executive directrix in her own right, and by far the least brilliant bulb in the metaphorical Fashion District chandelier, the inimitable Ms. Laurie Sale, started a flap about some map app crap and was dealt a slap by the generation gap. Watch and listen here, and turn the page for some mockery and the usual transcription.

Second, Rena Leddy,4 who in the past has somehow managed to pass fairly successfully as a sane person, gave up on that whole pointless charade and took a great deal of time out of everyone’s lives to explain how that periodic BID-sponsored black mass known as the Urban Dinner Party celebrates a lack of public space by reserving a public street for a private party, forbidding the public from even entering it without a pricey ticket, and how this somehow turns the closed-off street into public space.5 Watch and listen here, and, as above, turn the page for some mockery and the usual transcription.
END_OF_DOCUMENT_TOKEN_TO_BE_REPLACED 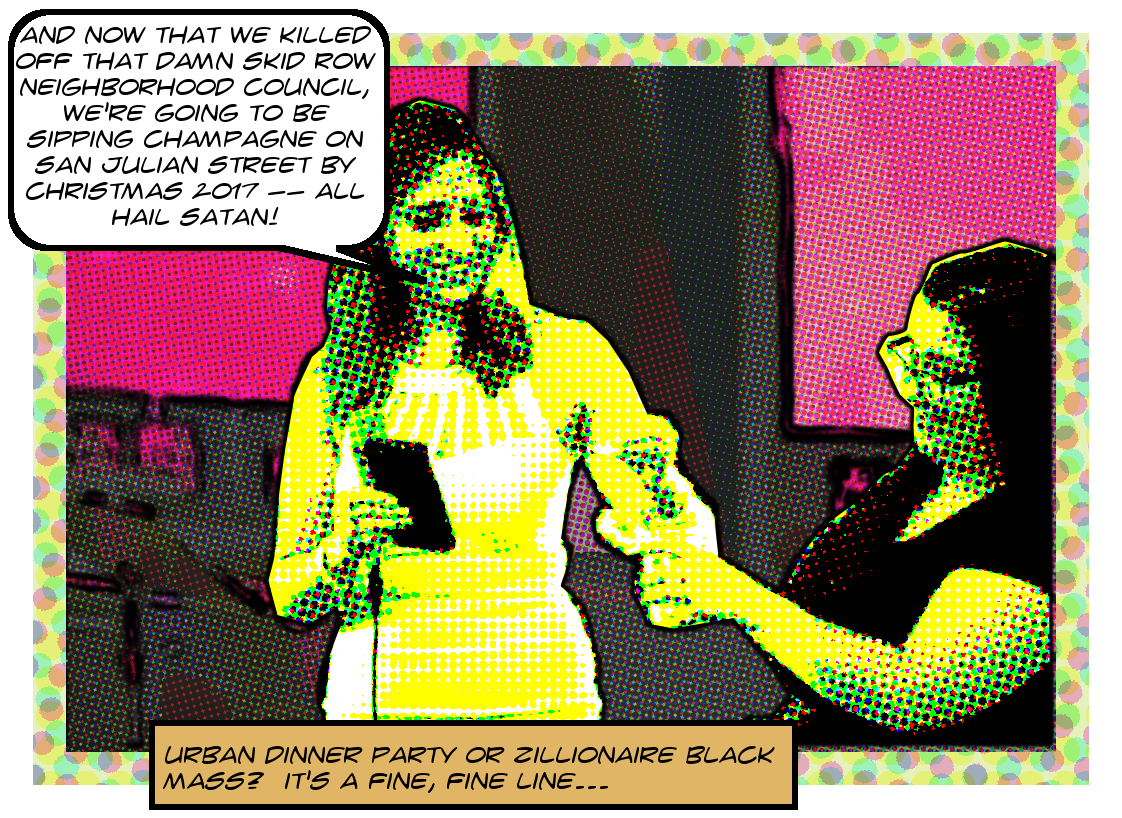 Just when you think it can’t get any weirder out there in BIDlandia, well … it does! You may recall last month’s revelation that the Fashion District BID paid some Berkeleyites almost $20,000 to study Santee Alley and report that, inter alia, Latinos are confused by lobster rolls. Well, in a similar yet far stranger vein, just the other day, the incomparable Rena Leddy1 sent me a video, paid for and produced by the BID, of a dinner party they had in the street last October.

The whole thing is not only deeply disturbing, it’s also embedded below the break for your edification if not your enjoyment.2 I put it below to calm the autoplay, which I can’t figure out how to eliminate. If you want to download it it’s available at Archive.Org as well.

And really, after you watch it, if you have any freaking idea at all why putatively mature adults would think it was a good idea to make a video like this, please let me know. It’s not just pornographic, it’s transparently so. I suppose it’s OK to be a self-satisfied narcissistic idiot, but why in the world does anyone want to announce to the world that they’re a self-satisfied narcissistic idiot? Seriously, this is why the Fashion District needs to get the homeless out of Downtown? So they can hold more zillionaire black masses like this one? Never gonna understand…
END_OF_DOCUMENT_TOKEN_TO_BE_REPLACED