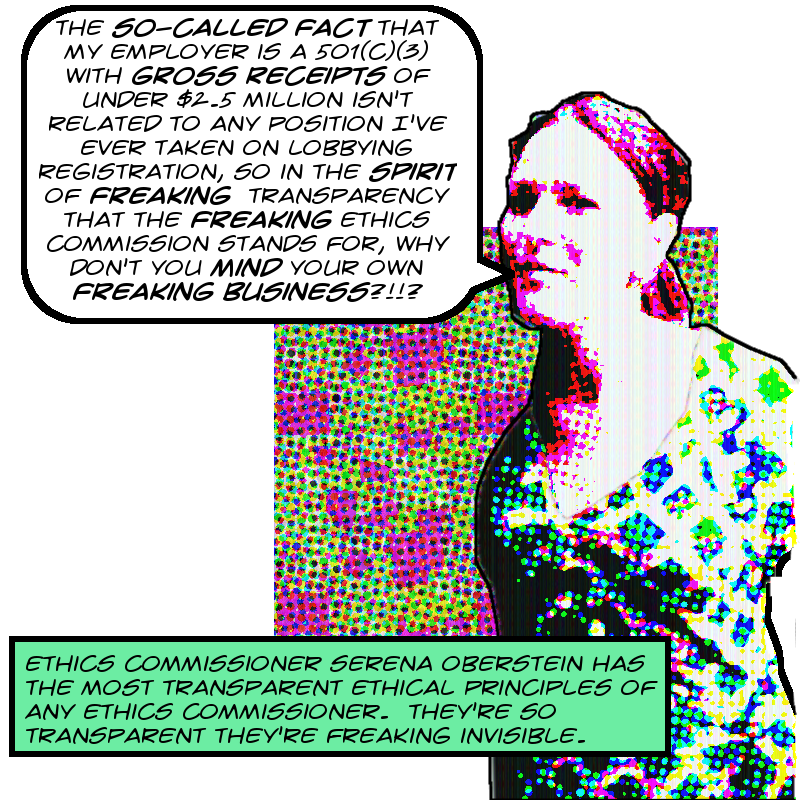 It hasn’t even been two weeks since the Los Angeles Ethics Commission put our City’s Municipal Lobbying Ordinance in danger of being made meaningless, primarily at the instigation of worst-of-the-bunch Commission Veep Serena Oberstein, with respect to 501(c)(3) nonprofits, so it’s not surprising that all the ramifications of their misfeasance have not yet been completely understood. Along those lines, therefore, here’s another episode from the ethical Twilight Zone in which at least some members of the Commission seem to dwell in these latter days.

You see, Serena Oberstein is not just the City’s most corrupt Ethics Commissioner, what with her sub rosa agenda-pushing for her nonprofit buddies Shyaam Subramanian1 and Nancy Berlin, amongst others, not to mention her refusal to agendize a perfectly reasonable request that her Commission disclose their ex parte communications,2 she’s also the Chief Operating Officer of some Westside do-gooder outfit called Vision to Learn.

And while I had some inchoate notion that her involvement with 501(c)(3) nonprofits might explain at least some of her motivations in the recent fiasco, whereby mostly at Serena Oberstein’s instigation, the Commission ended up recommending to the Council that all 501(c)(3)s with gross annual revenues under $2 million be exempt from registration as lobbyists, I hadn’t taken the time to investigate. But recently it occurred to me to look at Vision to Learn’s3 Form 990s to see how the modifications pushed by Serena Oberstein would affect her employer.4 I published the last few years here on Archive.Org, or you can go directly to the PDFs here:

So take a look at the evidence yourself, or turn the page to see what I found!
END_OF_DOCUMENT_TOKEN_TO_BE_REPLACED

In August the Ethics Commission continued the multiyear discussion about revising the Municipal Lobbying Ordinance. The next stage in the process was three interested persons’ meetings held in September, and then on to more discussion at yesterday’s Ethics Commission meeting. The meeting was essentially interminable,1 and I recorded the whole lobbying discussion. You can watch it either on Archive.Org or on YouTube:


I hope to write about the outcome of the discussion as soon as possible, although things are ultra-busy here at MK.Org secret headquarters. The short version is that the Commission accepted most of what staff recommended with a few changes and two items to be discussed even more at the December meeting. In any case, it turns out that the most interesting part of the meeting, and I don’t think this is so uncommon in City Hall, took place in the hallway fifteen minutes before the call to order.

There, I was lucky enough to witness lobbyists2 Shyaam Subramanian of Bolder Advocacy and Nancy Berlin of CalNonprofits engaged in an intense conversation with Ethics Commissioner Serena Z. Oberstein about proposed revisions to the MLO involving nonprofit corporations, whose interests both of them are compensated to represent to the City. At one point she even thanked them for giving her “language,” presumably having to do with their preferred outcome in the upcoming meeting, and went so far as to take notes on it in her phone!
END_OF_DOCUMENT_TOKEN_TO_BE_REPLACED