I can’t remember where I learned that the Office of the Chief Legislative Analyst writes briefing notes for each meeting of each City Council committee, but obviously as soon as I heard I started trying to get copies via the California Public Records Act. And so on June 24, 2020 I fired off a request asking for a few years worth.

And you know how the City of LA is. I didn’t get a response at all until September 29, when CLA staffer Karen Kalfayan sent me this ill-considered bit of crapola, claiming that she would have denied my request as “overly broad” but that instead she was denying it as so-called “deliberative process,” a court-created interpretation of the CPRA at §6255(a):

With regard to your request for briefing notes for the period January 1, 2016 through June 24, 2020, please be advised that this Office has made its determination on your request as required by Government Code section 6253(c).

Please note that the request is overly broad, and normally we would request you to clarify your request in order for us to search for specific records. However, please be advised that records may be withheld under Government Code Section 6255 because they would show the officials’ deliberative process. As to these documents, Government Code Section 6255 permits nondisclosure because the public interest served by protecting the official’s decision-making process clearly outweighs the public interest served by the records’ disclosure.

But, you know, I had a thought about this. These briefing notes must be distributed to committee members, otherwise what’s the point? And the Brown Act, not the Public Records Act, contains a really important, really useful bit at §54957.5, also worth quoting:
END_OF_DOCUMENT_TOKEN_TO_BE_REPLACED 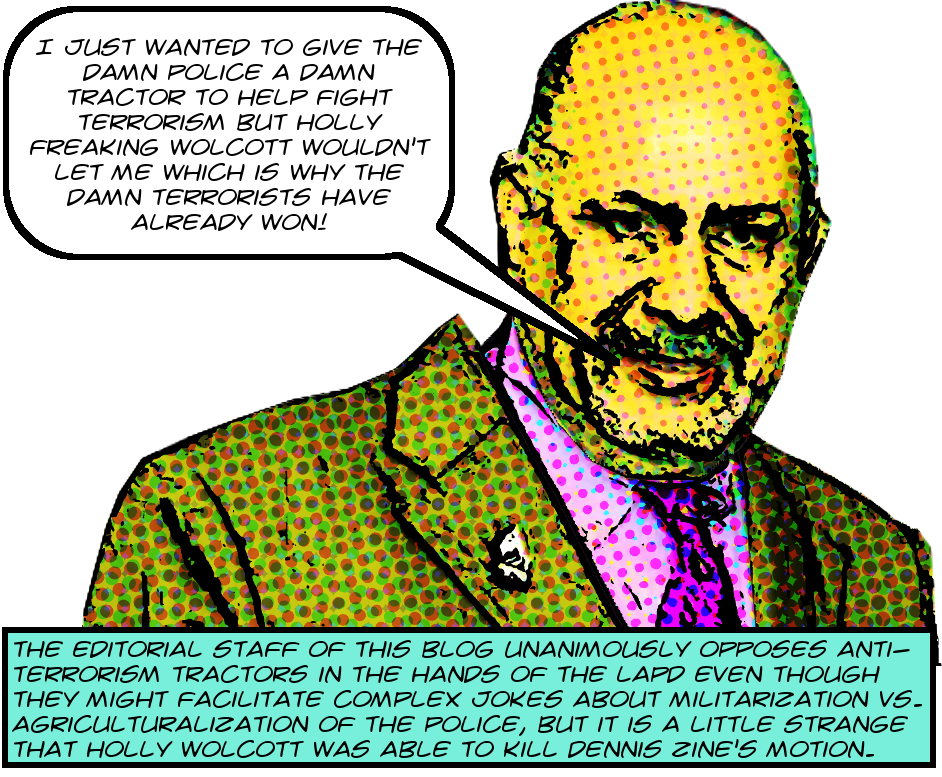 That’s the story! And I don’t know if it’s good or bad for Dennis Zine to give a tractor to the LAPD. It’s probably bad, because what good are the cops gonna get up to with heavy equipment?4 But good or bad, ideally the City is run by elected officials exercising their lawful powers lawfully granted to them by the people rather than by appointed functionaries using scheduling jujitsu to kill off properly introduced motions by leaving them to “die in continuation pergatory, [sic] never to be agendized again hell now. [sic]“ And turn the page for transcriptions of everything!
END_OF_DOCUMENT_TOKEN_TO_BE_REPLACED

A recent trip to the lovely City Archives on Ramirez Street, my absolute favorite of all city agencies,1 yielded up a bunch of really interesting stuff from 2001–2003. So much so that I started a new page for it. It took me three hours to look through two boxes of BID records (out of more than 400), so I’m sure there will be much more of this stuff to come. There’s a list of some highlights after the break, but check it!

In 2003 the BID’s expiring security contract with Burke Security, the predecessor of Andrews International, was put out for bids. Aaron Epstein, yes, the same one whose nuclear bomb of a lawsuit established the subjection of BIDs to both the Brown Act and the California Public Records Act, thereby making this blog possible, and a large group of his fellow Hollywood BID stakeholders2 sent a letter to then-mayor James Hahn complaining that they:

believe[d] that the District’s board of directors and executive director have not conducted a fully open and competitive process to ensure that property owners receive the finest security service for the lowest competitive price (the current two year contract exceeds $2 million). Moreover, we believe that the board and executive director have failed to be objective in the process and have allowed the contractor, Burke Security, to function in ways that do not provide the maximum benefits to the property owners and merchants.

If you read the letter you’ll see that they’re talking about practices that are still retained by the current BID Patrol: custodial arrests rather than observe-and-report, unseeming over-coziness with the staff of the HPOA, and so on.3 The copy I obtained came with a couple of handwritten notes4 from a Clerk’s office employee suggesting that they warn Kerry Morrison that people were watching so she should follow the rules. This, obviously, is not the kind of behavior one would expect from a regulatory agency. Why didn’t they tell Kerry Morrison to follow the rules because the law required her to?
END_OF_DOCUMENT_TOKEN_TO_BE_REPLACED