Former City of Los Angeles staffers are super-famous for their seamlessly corrupt transitions between public service and the lobbying industry, so much so that we had to create a so-called revolving door ordinance to (very lightly) regulate the practice. As with so many of the rules putatively enforced by our beleaguered and underfunded Ethics Commission, though, this ordinance is widely ignored.

We’ve seen many examples of this revolving door phenomenon, for instance, Marie Rumsey moving from CD13 to the Central City Association in 2015, but I’m not aware of much information on what goes on when the door is opened and the former staffers prepare to step across the transom. Some light is shed on this phase of the process by a newly acquired email conversation from November 12 and 13, 2020, though.

The discussion is between registered lobbyist Dwayne Gathers and soon-to-be-former CD4 Chief of Staff Nick Greif. It also sheds light on the fate of an ousted CM’s staff, as they struggle with divided and dividing loyalties while deciding whether to submit their resumes to the new regime after their boss David Ryu conceded to Nithya Raman on November 6.
END_OF_DOCUMENT_TOKEN_TO_BE_REPLACED 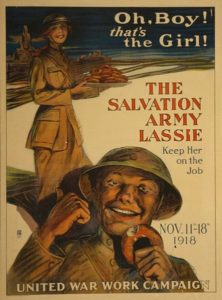 At least since February 2016, the Greater West Hollywood Food Coalition has been publicly discussing a move away from its long-time ground zero at Sycamore and Romaine. Of course, Ms. Kerry Morrison does not like this one bit and, in her rage,1 in May, went off in a tizzy crying to Salvation Army Board member Hank Hilty, whose family owns the Northeast corner of Third and Fairfax,2 and to the Salvation Army Southern California chief-directorate-for-something-or-another in Long Beach, saying something like “Hey fellow zillionaires! We don’t like this so can you please put a stop to it?”

And just watch her little speech on the matter from May. See how her affect just screams competence, omnipotence, every-kind-of-cence-but-common-sense? Well, according to the Park La Brea News, the Food Coalition’s move is a done deal and they will start serving meals there on January 1st. So much for Kerry Morrison’s back-channel-zillionaire-solidarity methodology. But does she just admit that she’s been trying to stop this development for almost a year now and has failed utterly? Nope! She’s quoted right in the article, speaking as if from her metaphorical dais, that imaginary place of calm, controlled, power. Also sprach die Königin von Hollywood:

“[The GWHFC and Salvation Army] don’t perceive it will be much of a net increase of people coming to Hollywood, but we will have to see. I don’t necessarily buy that,” Morrison said. “The concern is not about the meal program, it’s what happens before and afterwards. When you are embarking on a project like this that is not self-contained, it is going to have implications for the surrounding neighborhood. We definitely will be watching. We will be tracking to see if there is any increase [in homeless people coming to Hollywood]. If we are 60 days into it and there is no impact, then we are golden.”

The tacit assumption here is that anyone cares whether or not she is “golden.” In fact, if anyone at all cared, she would have been able to stop the whole thing in January, when she first started tracking it, or in May, when she first started whining about it in public. But she couldn’t, so why would she be able to now? She’s putting up a good front, but she’s putting up a front.

And that’s not all! Note how she says that ” We definitely will be watching. We will be tracking to see if there is any increase [in homeless people coming to Hollywood].” Well, she’s talking about the BID Patrol watching, obviously, and that presents an interesting legal problem for her. Also, recall that CD13 Councildude and Darth Four-Eyes Mitch O’Farrell has been trying to get the Food Coalition shut down since about 20 minutes after he took office in 2013. He has something silly to say about the whole thing too. Read on, friends, for details!
END_OF_DOCUMENT_TOKEN_TO_BE_REPLACED