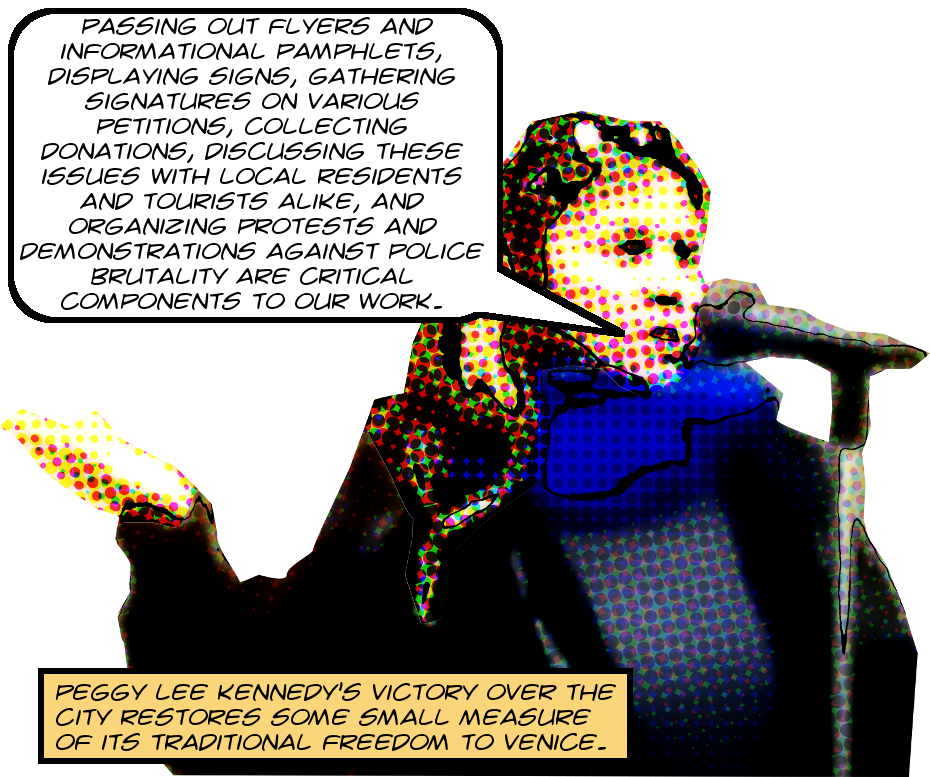 And that’s pretty much where things stood for over two years until yesterday, Wednesday, October 10, 2018, when the City of Los Angeles passed a motion agreeing to settle the case. The terms are excellent for the plaintiffs. The City agrees to rewrite the relevant section of LAMC 42.15 to explicitly state that activities protected by the First Amendment, including the use of a table, are expressly allowed on the Boardwalk until midnight. The City will also pay Carol Sobel’s office $80,000 for her excellent work on this matter. Turn the page for the full text of the motion. You can also read most of the pleadings here on Archive.Org.
END_OF_DOCUMENT_TOKEN_TO_BE_REPLACED

Last month Judge Dean Pregerson heard oral arguments on the City’s motion to dismiss this suit, filed by the Venice Justice Committee against the City of Los Angeles in opposition to its ham-fisted attempts to regulate speech on the Venice Boardwalk. Today he filed his order denying the motion to dismiss in part and granting it in part as well. Pregerson’s a lively writer, and the order makes interesting reading. There are three main issues addressed in the order.

First up, the City regulates vending on the Boardwalk in various ways, but contains an exception for soliciting donations and other activities protected by the First Amendment. Plaintiff Peggy Lee Kennedy was evidently told on a couple of occasions by LAPD officers that asking for donations was vending and that she had to stop or face arrest. Everyone agrees that these cops were in the wrong, but the question before the Court seems to have been whether the law “as applied” was unconstitutional. Pregerson found that it was not, and accordingly dismissed the parts of the complaint that had to do with that claim.

Second,1 the Plaintiffs made claims under the Bane Act, which allows people to sue if their constitutional rights were violated maliciously. Pregerson found that even assuming that the Plaintiffs’ constitutional rights were violated, they weren’t violated maliciously. I’m skipping some details, but that’s essentially why he also dismissed this cause of action.

Finally, and most interestingly, we come to the Plaintiffs’ claim that the City’s so-called Sunset Provisions are unconstitutional. This claim has to do with LAMC 42.15, which regulates vending and other activities at Venice Beach. In particular it states that “[n]o person shall set up or set down items in, take down items from or block, or attempt to reserve a Designated Space2 between Sunset and 9:00 am.”
END_OF_DOCUMENT_TOKEN_TO_BE_REPLACED

A couple weeks ago the City of Los Angeles phoned in a motion to dismiss Carol Sobel’s lawsuit on behalf of Peggy Kennedy and the Venice Justice Committee. I went out to the Spring Street Federal Courthouse this morning to hear arguments, and it was not a waste of time, although the City still doesn’t seem to be making a serious effort in defending this case. The Deputy City Attorney, Sara Ugaz, didn’t argue so much as read selections from the City’s reply in support of its motion to dismiss. The reply is weak, and so were the selections, even more so for being read verbatim.

You may recall that the City is claiming that linking speech restrictions on the Boardwalk to the time the sun sets is accomplishing some rational purpose. First amendment jurisprudence allows such restrictions, but the purpose must be accomplished by the least restrictive means necessary. Thus it doesn’t portend well for the City, or at least for the fate of the motion to dismiss, that Pregerson repeatedly questioned Ugaz on how using the time of sunset could possibly be the least restrictive means. He mentioned that it occurs at different times during different seasons, for instance. This prompted Ugaz to claim that the City wants to clear the view of the ocean at sunset and that “people are coming home then.”1 The judge noted again that the sun sets at widely varying times, so how does anyone know when people are coming home. This prompted Ugaz to admit that “perhaps that wasn’t the best reason.”
END_OF_DOCUMENT_TOKEN_TO_BE_REPLACED