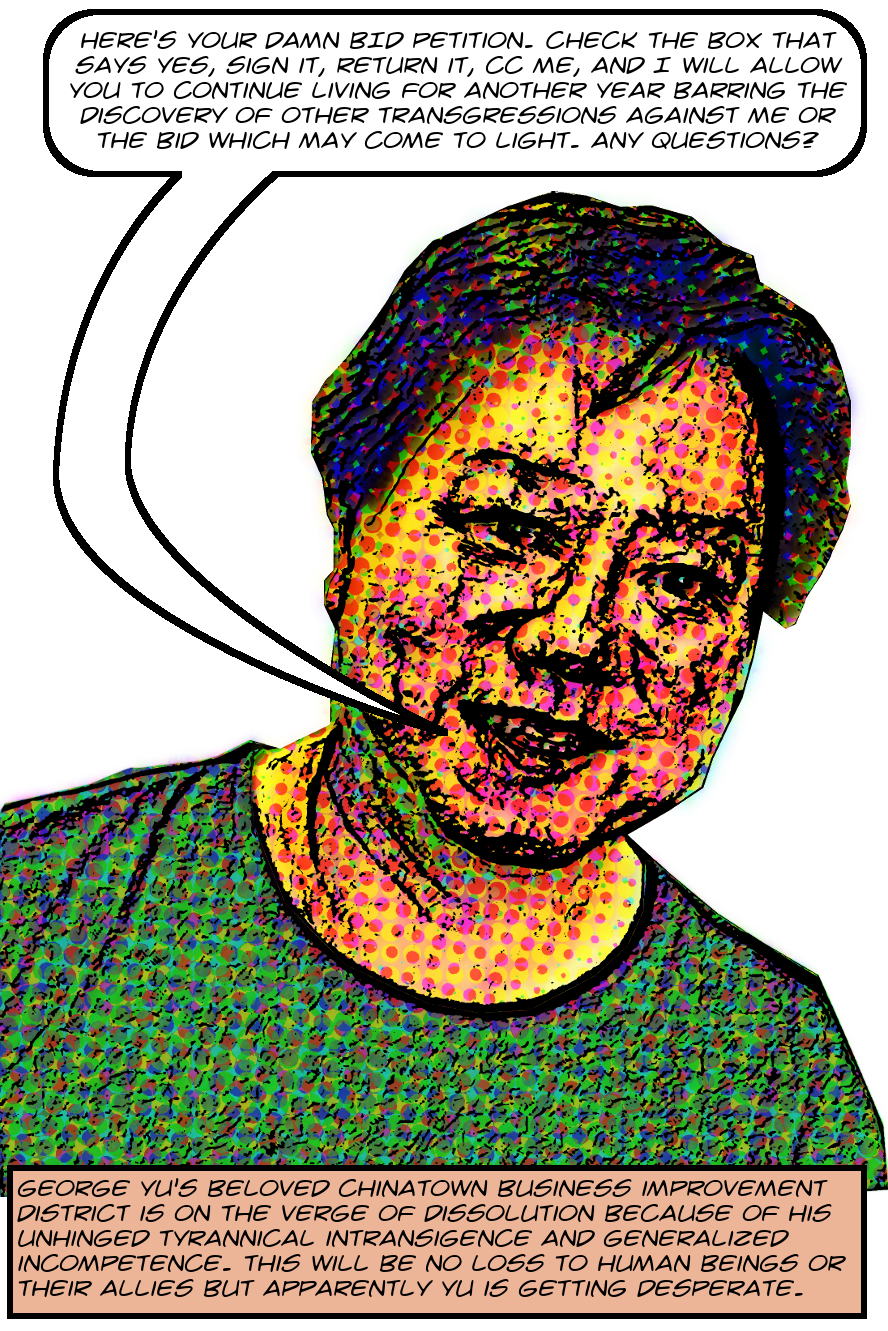 I would like to thank volunteers from Chinatown Community for Equitable Development for calling my attention to the monumental significance of these records.

Based on a set of records I recently obtained from the Los Angeles City Clerk’s office, it appears that the Chinatown Business Improvement District has failed to gain sufficient support for its scheduled 2021 renewal and will cease to exist on December 31, 2020. On June 8, 2020 the Clerk sent a letter to the BID’s executive director, the famously unhinged George Yu, informing him of the pending expiration:

The Greater Chinatown Business Improvement District (Chinatown BID) will expire on December 31, 2020 and must cease all BID operations after that date. The Office of the City Clerk is requesting a letter indicating the intention of the BID to renew or expire. If it is the BID’s intention to expire and not renew, this Office will require the following:

1. A letter from the Board President indicating intent to allow the BID to expire.

2. An inventory of all assets currently held by the Chinatown BID.

3. A timeline for winding down the Chinatown BID and an estimate of the associated costs.

Additionally, in accordance with Section 10 of Contract No. C-118431 between the City of Los Angeles and the Los Angeles Chinatown Business Council, Incorporated, all remaining revenues of the District, after all outstanding debts have been paid, derived from the levy of assessments, or derived from the sale of assets acquired with the revenues, shall be refunded to property owners in the manner described in Division 6, Chapter 9, Section 6.619 of the Los Angeles Administrative Code.


There are a lot of technical details behind this story, but the essence is simple. According to the Property and Business Improvement District Act of 1994, the state law authorizing BID formation in California,1 a BID establishment or renewal requires the submission of valid petitions supporting the BID from property owners whose parcels constitute greater than half of the proposed assessed value.2

As of June 17, 2020, according to this spreadsheet prepared by the Clerk at Yu’s request, the Chinatown BID had collected petitions representing only 23.66% of the required value. Note that the BID has since collected more than this but not all of them have been accepted as valid by the Clerk, who has the final say. Apparently Yu is continuing to collect petitions, but according to this May 21, 2020 email from the Clerk’s office these late petitions cannot count towards a 2021 renewal, although with some adjustments to the process they may support a BID renewal effective January 1, 2022.

It’s possible, though, that Yu and his BID just don’t have sufficient support from Chinatown property owners. The BID as it presently exists was authorized by a Los Angeles City ordinance known as the Alpha BID law,3 which allowed BIDs to be formed with the support of only 30% of the assessed value, significantly less than the 50% required under the state-authorized procedure.

At least since 2013, as seen in 2013 during a dispute over the Arts District BID the City of Los Angeles will no longer allow this law to be used for BID formation. In 2010 when the current Chinatown BID was established, according to the City Clerk’s report to Council, only slightly more than 31% of the assessed value supported formation.

Furthermore, as we’ve seen, the Clerk will no longer vote City of LA property in favor of BID renewal or establishment until the 50% threshold has been reached by non-City petitions.4 The City-owned property in the CBID amounts to 6.78% of the assessed value, which represents a significant impediment to Yu’s reaching the required petition rate. I have more requests pending, and there’s surely more to this story, but at this point it really looks like there will be no Chinatown Business Improvement District next year.