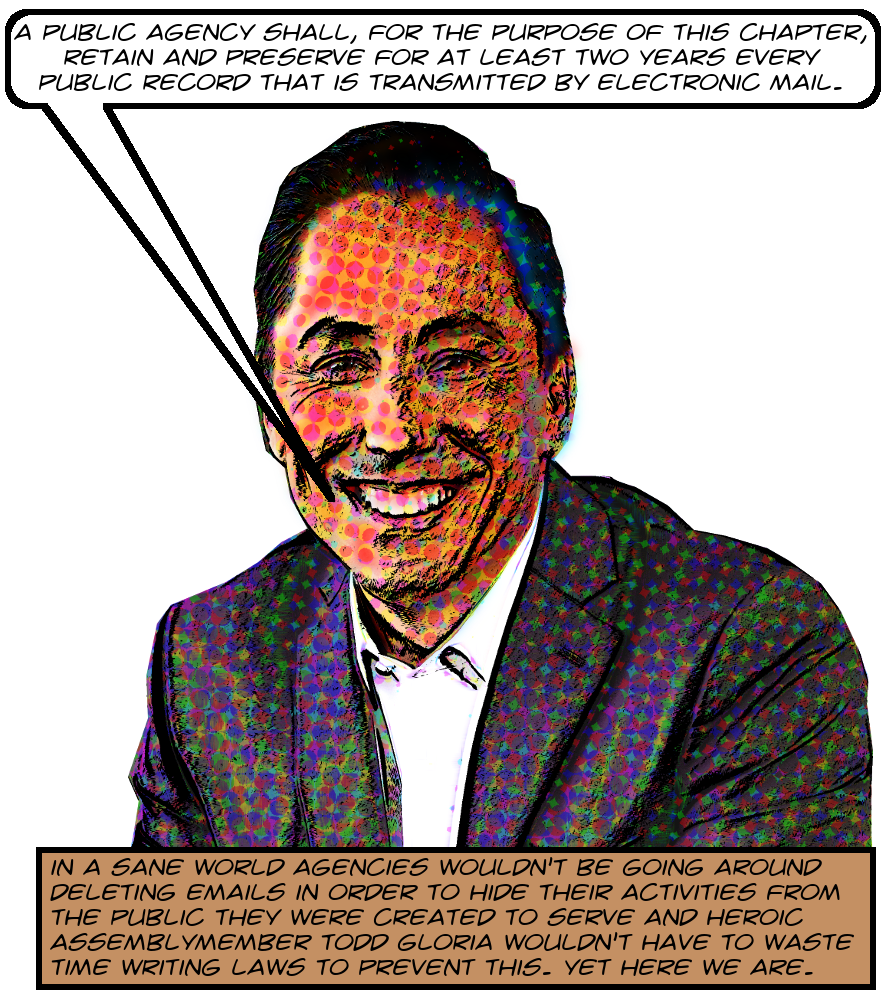 Perhaps you remember last year’s Assembly Bill AB1184, introduced by government transparency hero Representative Todd Gloria, dishonestly opposed by a bunch of mendacious business improvement districts and other shills with a lot to hide, and ignominiously vetoed by California Governor Gavin Newsom at the behest of lobbyists hired by the bad BIDdies and their enablers? Well, Gloria reintroduced it this year, and here we go again!

The new number is AB2093, and perhaps this time the forces of good and right will be able to overcome the nonsensical objections and get this baby passed. The Los Angeles Sunshine Coalition submitted a letter in support today, and you and/or your organizations can submit one as well! Send to Raquel Mason via email at raquel.mason@asm.ca.gov.

It’s expected to go to committee in March so it’s not urgent, but it’s also not not urgent, so don’t dilly-dally! And read on for a transcription of the letter sent by the LASC. Oh, and also! The dishonest opposition has already begun. Behold an idiotic form letter of opposition sent by some random special district somewhere north of Pacoima. Too dumb to analyze, but maybe worth a glance?

Dear Assemblymember Gloria:
I write today on behalf of the Los Angeles Sunshine Coalition (“LASC”), an unincorporated association that, since 2014, has worked to expand transparency in local Los Angeles area government through education, advocacy, litigation, and activism. LASC unequivocally supports AB2093, which would require public agencies subject to the California Public Records Act (“agencies”) to retain emails for no less than two years. The reasons behind this position follow.

Each year our members make hundreds of requests for public records, which often include emails. Our work is mostly limited to the City of Los Angeles, where we’ve found that the overwhelming majority of agencies already retain emails indefinitely. Despite that agreeable fact, nevertheless a mandated two year retention period is necessary. A significant minority of Los Angeles area agencies have exceedingly short retention periods. This is especially common among business improvement districts and charter schools, but certainly not limited to them.

For instance, the Los Angeles County Metropolitan Transit Authority (“Metro”), a joint powers authority with an annual budget of more than $7 billion, officially retains emails for only one month. We’ve even seen business improvement districts some of whose staff or board members claim to delete emails immediately on receipt and only retain important ones by printing them out before deleting the files.

Our experience reading hundreds of thousands of government emails over the last six years has taught us that these records are not merely ephemera, not merely transitory communications. Rather, they are essential for understanding basically every function of local government. When agencies delete them quickly, before interested members of the public have a chance even to request them, it becomes impossible for citizens to monitor the workings of the government.

Not only that but government emails are an invaluable resource for future historians, irrecoverably lost once deleted. It’s true that AB2093 wouldn’t require indefinite retention, but a two year required retention period will at least allow requesters to make informed guesses about what subjects are important and make requests intended to preserve that information.

Last year’s version of this bill, AB1184, faced significant opposition from local agencies and was ultimately vetoed by Governor Newsom. The main objection cited by opposing organizations was that the cost of retention is too high, which, according to his veto message, was the Governor’s objection as well. This seems implausible, though, given how cheap storage is these days.

For instance, Google’s enterprise email systems offer unlimited email and file storage at a per user per month rate starting at $12. And although Microsoft’s comparably priced enterprise email only comes with 50GB of email storage, it includes free archiving of emails with no size limit. These are the two most popular email systems used by governments and other public entities, and for neither of them is the amount of storage an important element of the cost. Agencies are already paying for sufficient storage.

We’re grateful for the reintroduction of this essential bill and, as stated, we support it unequivocally. Please don’t hesitate to contact me if we can further assist your office in passing this bill into law.

Image of Todd Gloria is ©2020 MichaelKohlhaas.Org and there is also this.