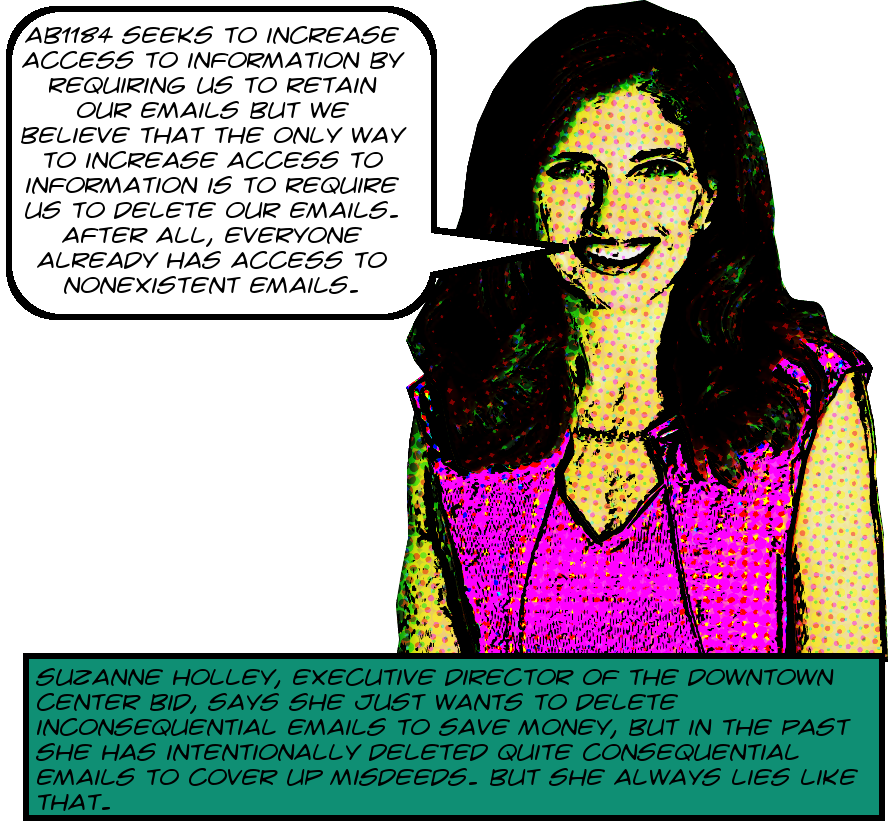 Assemblymember Todd Gloria introduced AB 1184, which would clarify an ambiguity in state law by requiring public agencies to retain emails for a minimum of two years. You can read my earlier article on it here. Well, on Wednesday the bill was amended1 and passed out of the Senate Judiciary Committee with a 10 to 1 tally in favor.2 It’s really worth reading the Judiciary Committee Counsel’s analysis of the bill, by the way.

And I also have copies of support and opposition letters. Powerful support comes from the California News Publishers Association and the First Amendment Coalition. Here are their letters:

The opposition letters are predictably stupid, self-serving, and dishonest. They mostly take the position that it will cost too damn much to store two years worth of emails. Obviously, though, none of them provide any evidence because it’s just not true.3 Here are the links:

And, probably unsurprisingly, this last one, penned by Downtown Center BID executive director Suzanne Holley, already known to be one of the most mendacious of an exceedingly mendacious crew of Los Angeles BIDdies, is perhaps the most twisted, the most dishonest, and the most ineffective, it turns out, out of all of them. There is a transcription after the break, but behold a few highlights with commentary and counterpoint.

Suzanne, why is your BID opposed to this? “Agencies would be forced to maintain an onerous amount of data.” And why is this not in the public interest, Suzanne? “the public would need to sort through thousands of emails to find the relevant needle in the haystack.” Suzanne! See that little box in your email client with a magnifying glass in it? If you put words in there and click on something the computer will sort through the emails for you! I use mine all the time!

Explain again, Suzanne! “Requiring the retention of tens of thousands of emails will bury relevant information…” And what is your answer to this imaginary problem, Suzanne? ” we believe the bill can be amended to ensure that the retention only apply to information relevant to the public business.” Of course, Suzanne, the problem is that on your scheme, YOU would be the one who decides what the public business is when obviously it’s the public that needs to decide.

And what kind of stuff would Suzanne delete if allowed? Here’s what she says doesn’t need to be retained: “Every email, regardless of how irrelevant would need to be retained. … Even an email asking a colleague out to lunch would fall under the purview of this bill.” See? Suzanne is asking the public to trust her to determine which emails it’s in the public interest to retain. She seems to be saying she’s just going to delete a lot of emails about lunch dates.

Leaving aside serious arguments that such emails may be very important indeed, let me tell you a little story about what kinds of emails Suzanne Holley actually does in fact delete. Remember all those emails I got in 2017 about BID involvement in the destruction of the Skid Row Neighborhood Council? That Jason McGahan, then of the LA Weekly, used in his blockbuster article? That are now evidence in the lawsuit against the City for illegally tampering with the subdivision election? Well, I got the first batch of those emails from Suzanne Holley at the Downtown Center BID.

And later, following up on an email I had received in that batch that proved the complicity of zillionaire conspirator Ann D’Amato in the destruction, I asked Suzanne for all emails between her staff and D’Amato in some time range. And she told me that there were none. This, by the way, is BIDdie code for they’ve deleted all of them. So I asked for all emails on the day of the one I had.

And she produced a number of emails. But the smoking gun from Ann D’Amato was missing. So Holley or her subordinates had deleted it. Even though it was being used as evidence in a lawsuit against the City of Los Angeles for breaking the law at the behest of, among other organizations, Suzanne Holley’s employer, the Downtown Center BID.

She says she’s going to delete lunch appointment emails for the good of the public, but she’s really going to delete evidence for her own good and the good of her zillionaire compatriots. If this proposed law had been in force in 2018 I would have hauled her and her twisted BID into court over this.4 Really, it’s a good thing that the committee didn’t listen to her damn letter at all, not one little bit.

They did amend the bill on Wednesday, by the way, but they amended it to make it broader, more protective of access. In fact, they amended it precisely as the First Amendment Coalition asked them to, to allow other statutes to require retention of emails for even longer than two years. Take that, BIDdies! And stay tuned for more information about this fabulous legislative effort.

Transcription of the DCBID’s opposition to AB1184:

AB 1184 is extremely broad and will result in the retention of all and any email transmissions regardless of its relevance to the public good. Every email, regardless of how irrelevant would need to be retained. Requiring such is overly burdensome on agencies and provides no benefit to the public. Agencies would be forced to maintain an onerous amount of data, while the public would need to sort through thousands of emails to find the relevant needle in the haystack. Even an email asking a colleague out to lunch would fall under the purview of this bill.

The CPRA was created to ensure the public has access to information concerning the conduct of the people’s business as a fundamental and necessary right of every person in this State, a charge the DCBID does not take lightly. In recent years, however, agencies have seen an enormous increase (often abusive) in the number of CPRA requests. Requiring the retention of tens of thousands of emails will bury relevant information, increase costs for agencies such as BIDs, and compound the problem of serial litigants who will use this requirement in an abusive manner.

As drafted, AB 1184 butts up against the spirit of the CPRA to get information to the public. However, we believe the bill can be amended to ensure that the retention only apply to information relevant to the public business. In talking to the author, we do not believe it is his intent to require every email be retained. For this reason, we oppose unless amended and look forward to working with Assemblymember Gloria to achieve the goal of supporting the CPRA without placing undue burden on the public or agencies.

Please feel free to contact me should you have any questions.