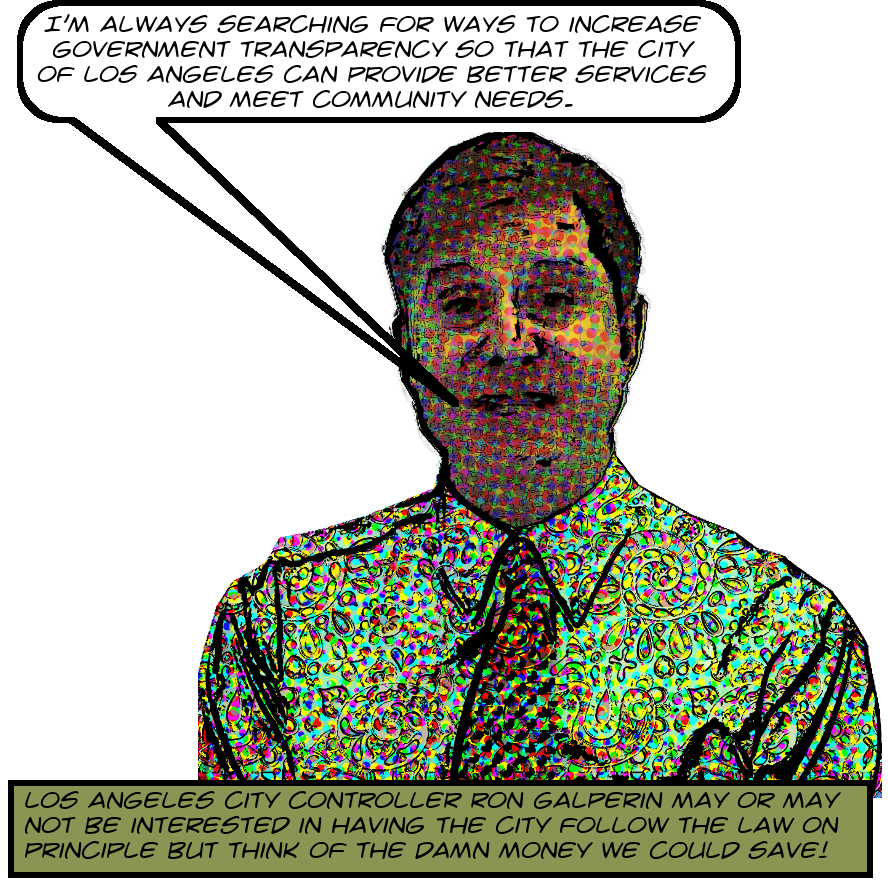 As you may well know, the City of Los Angeles has a really, really hard time complying with its obligations under the California Public Records Act. And as you may also know, the only remedy for noncompliance provided by the Legislature is to file a lawsuit against the violators. If the requester prevails1 the law requires the judge to award litigation costs and lawyers’ fees to the requester.

And, it turns out, the City of Los Angeles not only has a hard time complying with the CPRA but they get sued a lot over it. And they usually settle quickly but when they don’t they lose. A lot. And they pay a lot of money to requesters’ attorneys. In fact, since 2016 they’ve paid off in 26 cases to the total tune of more than $1.7 million. Here’s a list of all of these cases, both as a PDF and in the original XLSX.

Probably some of these cases involve legitimate controversies over the City’s decision to withhold records from release, but as you know if you follow this blog, most of them are due to very little more than the incompetence, indifference, or intransigence of City departments. Most of these cases could have been avoided if the City had just released records that they ended up releasing anyway as a result of the suit. Many could have been avoided if someone had just explained to a few City staffers what their obligations under the law actually were.

So not only does the City’s continual, habitual flouting of the CPRA deprive citizens of our constitutionally guaranteed right to access public records promptly,2 but it also costs the City an immense amount of money. All of which is wasted since had the City just followed the law in the first place they wouldn’t have had to pay any of it. Or to pay the salaries of the Deputy City Attorneys who had to handle these cases after they were filed.3

The City doesn’t even have a CPRA compliance policy, but if it did and if it followed it, none of this money would be wasted. The City of San Diego, it turns out, has a very similar problem, which I only found out about because they have an officer called the City Auditor. He recently investigated San Diego’s CPRA practices and policies and made recommendations for improvement.

Which reminded me that here in Los Angeles there is a also City official whose charge includes the right to audit and investigate the expenditures of City departments and to recommend policy changes to stop money wasting. This, of course, is the Controller, whose powers and duties are defined by the City Charter at §260 et seq. and which include the ability to “conduct performance audits of all departments and may conduct performance audits of City programs, including suggesting plans for the improvement and management of the revenues and expenditures of the City.”4

So he’s empowered to look into this matter, but of course, how’s he going to know to do that unless someone brings it up? Thus did I write Galperin a letter this morning asking him to get on it and audit the City’s CPRA compliance and policies and make recommendations. In particular I asked him not only to consult with requesters about needed policy changes, but also to consider recommending that the City create a central CPRA coordinator whose job would include receiving, processing, and assigning requests to departments and then tracking and ensuring compliance. Read on for a transcription and stay tuned to find out if anything comes of it!

Transcription of my letter to Ron Galperin about CPRA compliance:

I am writing to urge you to use your auditing power to investigate the City’s practices with respect to the California Public Records Act (“CPRA”) and to recommend policy changes to increase compliance and reduce liability. San Diego’s City Auditor recently examined that City’s CPRA compliance and found systematic failures, routine violations, and a culture of indifference to the law’s requirements.5 I believe you’ll find the same situation in Los Angeles.

The City’s inability or unwillingness to comply with the CPRA not only robs the public of its constitutionally guaranteed right to access records6 but it’s also a waste of money. The only method the Legislature has provided members of the public to enforce the City’s compliance with the CPRA is through writ petitions filed in Superior Court. The CPRA provides mandatory fee shifting to prevailing requesters. In other words, if the City loses one of these cases, the judge is required to award attorneys’ fees and costs to the requester.

According to the City Attorney’s office, since they first started tracking CPRA cases separately in 2016 the City has paid out more than $1.7 million in 26 cases to requesters’ attorneys.7 In this time the City has never, not once, prevailed in a CPRA action,8 which is further evidence of its systematic failure to comply with the law. Both the number and the total amount of payouts are increasing and are likely to increase further in the future as awareness of the City’s vulnerability increases among the local public interest bar.

I won’t list the City’s habitual specific violations here9 but you can get an accurate picture of them from the petitions listed in Exhibit 1 and the pending petitions.10 You’ll see that many of the City’s compliance failures are due to City staff’s ignorance of or indifference to the law’s requirements as well as deliberate obstruction.

Requests are wrongly denied, delayed, and mishandled. City staff don’t know what CPRA compliance software the City already owns or they don’t know how to use it efficiently. Staff often fail to ask the City Attorney’s office for advice on how to comply with the law. When they do ask, the advice they receive is often meant to enable obstruction rather than to increase compliance or reduce liability.11 And when a petition is filed, most of the time the City Attorney settles quickly, which shows that not only is their advice bad, but that they know it’s bad.

It’s obviously not possible to eliminate CPRA litigation against the City entirely. Certainly there will always be genuine controversies between the City and records requesters about what must be released. But most current CPRA litigation is over trivial, easily avoided violations. It’s possible to eliminate such cases by adopting and adhering to sensible, workable, consistent, compliant policies. A few simple changes could save the City a significant amount of money in fee awards.

If you do investigate and decide to recommend policies it would be valuable to seek input from requesters and other interested parties as to what specific forms they should take. I don’t want to overwhelm the message of this letter with a list of recommendations which would necessarily be highly technical. But there is one change that the City could make in its CPRA policies that’s important enough to include and which could potentially solve most of the City’s compliance problems. The City should create a citywide CPRA Coordinator.

Such an office could accept CPRA requests from the public, assign them to relevant departments, and monitor and ensure timely and adequate responses to requests. This office could also centralize access to software compliance tools, such as e-discovery software, and training in their proper use. This office could also receive and investigate complaints from requesters and implement an informal appeal process, which could potentially avoid a lot of the really trivial litigation the City currently ends up settling. It’s hard to imagine that this wouldn’t pay for itself by reducing both litigation liability and the staff time used responding to litigation.

Thank you for your time, and please feel free to contact me for more information or if I can assist you in any other way in regard to this matter.

Image of Los Angeles City Controller Ron Galperin is ©2020 MichaelKohlhaas.Org and that line he’s saying in the cartoon? He actually said it!