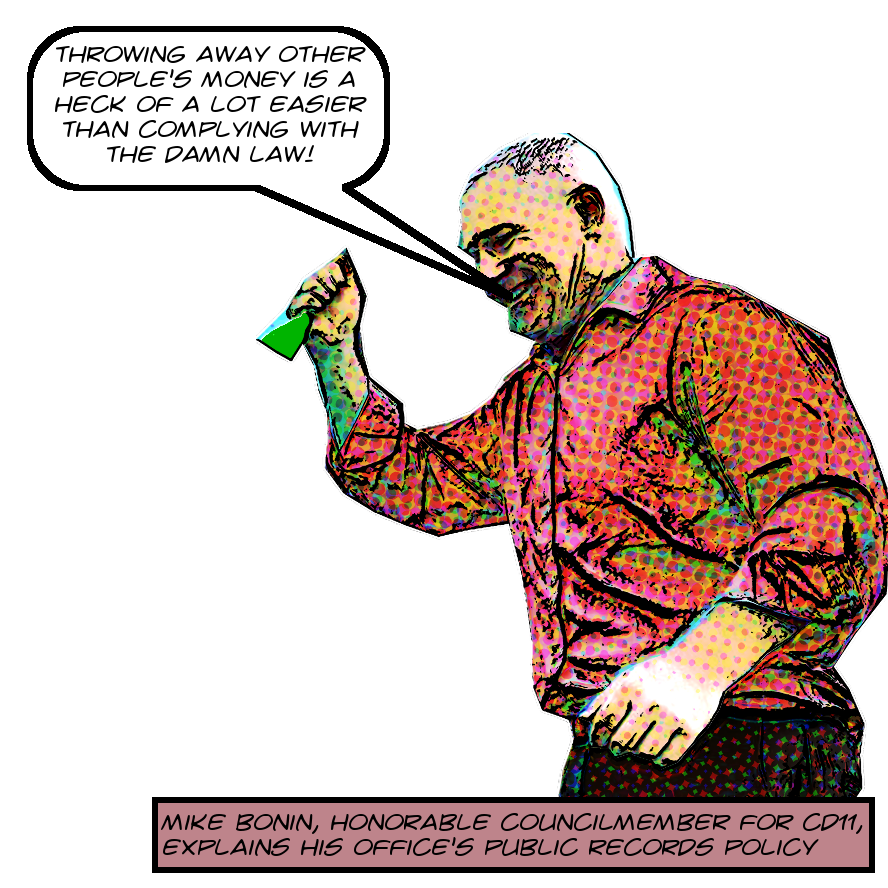 Maybe you remember that in June of this year I was forced by the unhinged intransigence of various CD11 staffers with respect to compliance with the public records act, with the able assistance of the incomparable Anna von Herrmann, to file suit against the City of Los Angeles. The issue was over emails mostly involving planters illegally placed on the public sidewalks of Venice by the usual Klown Kar Krew of psychopathic housedwellers, aided and abetted in their absolute flouting of the law by various CD11 staff members.

And unlike e.g. the Venice Beach BID, at least the City of Los Angeles knows when they’re beat and they started handing over records immediately. And although I still have some issues with the City’s compliance, especially over the formats in which they choose to produce emails, this wasn’t the time to fight those battles, and they do at least know when they’re beat.

A lot of the material they produced in response to this suit was quite important. Not least e.g. was this story about how former and not-really-well-missed Bonin staffie Taylor Bazley not only abetted angry housedwellers in another crazed anti-homeless hostile landscaping project but even discouraged them from planting trees because, spake Bazley, homeless people like shade.

And just recently the settlement agreement was finalized, and you can get your copy here. As is the way with such material it’s really not that interesting. But there is one really interesting bit and that is that the City of Los Angeles agreed to pay von Herrmann $12,665 for her labors.

Money, by the way, that is completely and totally wasted given that if they had just handed over the records when I asked for them they would never have had to pay a penny of it. Which circumstance, by the way, practically begs me to question the City’s bizarre decisions not to have a uniform CPRA policy, not to promulgate any kind of effective guidelines among departments for minimizing City liability by actually complying with the law, not to meet and confer with me before I file suit even though I ask them to on a regular basis, and so on.

It’s not cheap for them. This is my third settlement with the City of Los Angeles this year, and including this one they’ve paid about $27K to my lawyers. I’d be surprised if this were the last settlement this year, too. I’m not sure what the City intends by having policies that encourage these outcomes, and I suppose they probably know what they’re doing, but I don’t think their goals, whatever they are, are appropriate for a government agency. Guess I’ll have to keep suing them until they agree with me, at least performatively, by figuring out how to follow the damn law!

Image of Mike Bonin is ©2019 MichaelKohlhaas.Org.