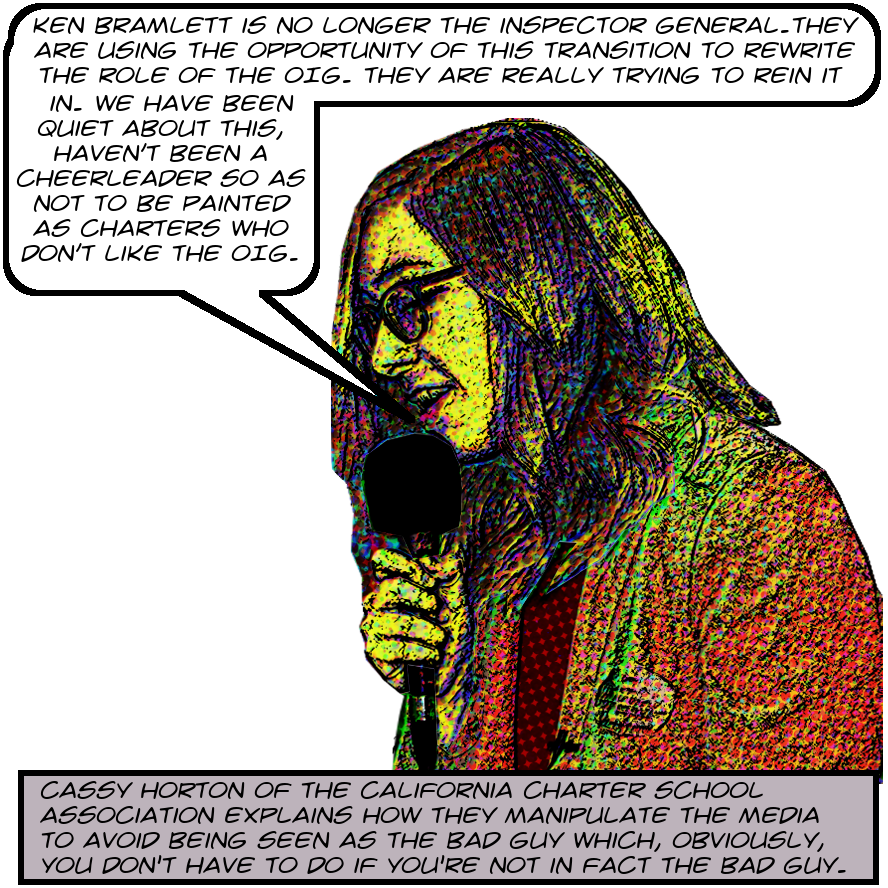 The Los Angeles Unified School District has a particularly powerful oversight office, the Office of the Inspector General, known in the trade jargon as OIG. And in 2018 the School Board failed to renew then-IG Ken Bramlett’s contract. According to LA Times education reporter Howard Blume, pro-charter board members Monica Garcia, Kelly Gonez, and Nick Melvoin voted against renewal, which was enough to deadlock the board and prevent Bramlett’s return. Blume also noted that Bramlett had aggressively investigated some charter schools, in some cases leading to criminal charges being filed, and that charter schools had been clamoring for limits on OIG’s ability to investigate them but he stopped short of saying that Bramlett’s fall from grace was due to charter school influence.

And later a bunch of overwhelmingly salacious details of a number of really appalling and quite serious hostile work environment complaints against some of Bramlett’s senior subordinates came out along with credible accusations that Bramlett had at best failed to take these complaints seriously. Regardless of the validity of the uproar, and it seems quite valid indeed to me, this had the effect of directing most of the media attention away from charter school involvement in Bramlett’s downfall. Not entirely, though. For instance, Kyle Stokes, education reporter with KPCC, did mention that charter schools had been seeking to limit OIG’s role in overseeing them, although in that same article noted that “sources who spoke to KPCC said that concern over charter oversight was not a factor in the board’s thinking”

But newly published internal documents from the Los Angeles Advocacy Council, a shadowy organization run by the California Charter School Association and about 20 local charter school leaders, paint a very different picture. In fact LAAC and the CCSA give themselves credit for taking advantage of the chaos at OIG in order to effectively remove oversight of charter schools from OIG’s purview.

Not only that but they claim to have kept quiet about the issue in order to protect their public image. In the same document they also claim that they were asked to do so by unnamed people in the District who promised CCSA and LAAC that “they would handle it, and they followed through” Given some statements in another document it’s not impossible that convicted felon and then Board member Ref Rodriguez was one of these unnamed people. The charterites were thrilled by the outcome of their work against OIG oversight, announcing that it “should be seen as a major win by and for the charter community.” Perhaps this media strategy underlay Stokes’s sources’ comment about charter involvement in Bramlett’s non-renewal.

And recently we learned from this same set of records that, for instance, LAUSD superintendent Austin Beutner allowed charter school lobbyists to write at least one of his major policy speeches. And that Board member Nick Melvoin leaked information about confidential legal strategies to them and let them write Board resolutions.

Given the magnitude of these revelations it’s pretty plausible that someone in the District was conspiring with CCSA and LAAC to take advantage of chaos in OIG to implement the charters’ desire to be free of meaningful oversight. It’s plausible, but it is in no way acceptable. It’s bad enough to reduce oversight of charter schools, which receive so many millions of dollars in public money. But to reduce it in response to their demands, according to their plan, and to do this in secret while they pretend to the world not to have been involved, is absolutely intolerable. Intolerable but, as I said, given recent events, not surprising. Read on for links to and detailed quotes from relevant documents.

★ LAAC Accomplishments 2016-2018 — This is a remarkable two page summary of what the Los Angeles Advocacy Council saw as its greatest accomplishments in the first two years of its existence. There is an incredible amount of ridiculously offensive, ridiculously arrogant stuff in here. And the item about the OIG fits right in:

Advocated against the District’s use of the Office of the Inspector General (OIG) for charter school oversight in 2017 letter to the State Board of Education and during DRL negotiations, resulting ultimately in modifications to OIG workplan in June 2018 removing charter investigations from the scope of work.

★ June 8, 2018 LAAC Leadership Update — Again, this is a very rich record, which yields literally dozens of important revelations.1 Here’s what we learn about the OIG:

On Wednesday, KPCC News published a story noting that LAUSD does not intend to renew Inspector General Ken Bramlet’s employment contract when it expires at the end of June. According to KPCC, Monica, Kelly, and Nick voted against renewing the contract, while Ref abstained. The 3-3 deadlock resulted in the contract not being renewed. Some media coverage speculated about whether the decision was related to charter politics. Also this week, the OIG released its 2019 Work Plan. Unlike prior years, the plan describes it anticipated charter school work as the “[OIG] will continue to conduct due diligence reviews of charter schools and their principal officers to assist the [CSD] in making fair and equitable recommendations to the Board of Education.” But, it does noto mention of charter “investigations” or Audits. The signified a major shift away from charter oversight by the OIG, and is what we ended up pushing for during the DRL negotiations in the fall. This should be seen as a major win by and for the charter community.

Ref shared with Jed earlier this week that the BOE intends to re-orient the OIG office toward its original intent, which will be to focus on fraud and abuse within the bond programs, once they hire to replace Bramlett. In the past, CCSA’s Legal Team has written a letter to the District outlining its concerns with OIG overreach, but, with given the current trajectory and board member feedback, we will likely off on writing a letter until a new Inspector General is hired so we don’t throw current progress off course.

★ LAAC June 2018 minutes (part of August 2018 agenda) — I’m going to stop saying it for each of these documents individually, but every word in this thing is worth reading. I’m just extracting the bits about the OIG but there’s any number of as or more important items in here. Here we see Ted Morris of Endeavor College Prep crowing about their victory over the OIG:

Ted: DRL, progress against OIG. The best – we as a collective group are being strategic, not just reactive.

★ LAAC August 2018 minutes — Here we see Ted Morris again bringing up the changes in the OIG and Cassy Horton of CCSA explaining exactly what happened behind the scenes:

Ted: At this time last year, a lot of our conversations were around the OIG. Is that folded into the concept of oversight? (Cassy: Ken Bramlett is no longer the inspector general. They are using the opportunity of this transition to rewrite the role of the OIG. They are really trying to rein it in. We have been quiet about this, haven’t been a cheerleader so as not to be painted as charters who don’t like the OIG.) (Emilio: This was the one thing we backed down on during DRL negotiations, they told us they would handle it, and they followed through.)

★ September 28, 2018 LAAC Leadership Update — Here CCSA updates LAAC on LAUSD’s hiring of a new inspector general and commits to continuing to monitor the situation, in particular “adherence to the board-approved … work plan,” which limited OIG’s powers over charters. Their victory over Bramlett and the removal of oversight capability were in no way the end of their fox/henhouse work on this matter:

On Tuesday, during closed session, the LAUSD Board of Education approved an employment contract for William Stern to serve as the district’s Inspector General effective January 31, 2019, through June 30, 2020. Mr. Stern is currently the FBI’s Chief Attaché to the Netherlands and Europol (the European Union police agency). He has worked for the FBI since 1999 investigating white-collar and financial crimes and, prior to that, was an auditor with the Internal Revenue Service. We will continue to monitor the OIG’s adherence to the board-approved FY 2019 OIG Work Plan and keep you posted on any developments coming out of the OIG office.

★ March 15, 2019 LAAC Executive Council Update — Here the LAAC outlines its continuing goals in relation to LAUSD oversight of charters.2 this is from March of this year, so they’re definitely not letting it drop. The ongoing moral is that any attempt by sane people to get the OIG back on track and increase LAUSD oversight of the often-shady operations of charter schools will continue to be met with significant resistance:

Fundamentally improve the authorization and oversight experience for LA charter schools and the relationship between authorizer and charter schools in LA by securing structural reforms at LAUSD. In addition, continue to monitor OIG activity as it relates to LAUSD authorized charter schools.

Image of Cassy Horton is ©2019 MichaelKohlhaas.Org and you can find this other Cassy Horton off in the distance here.