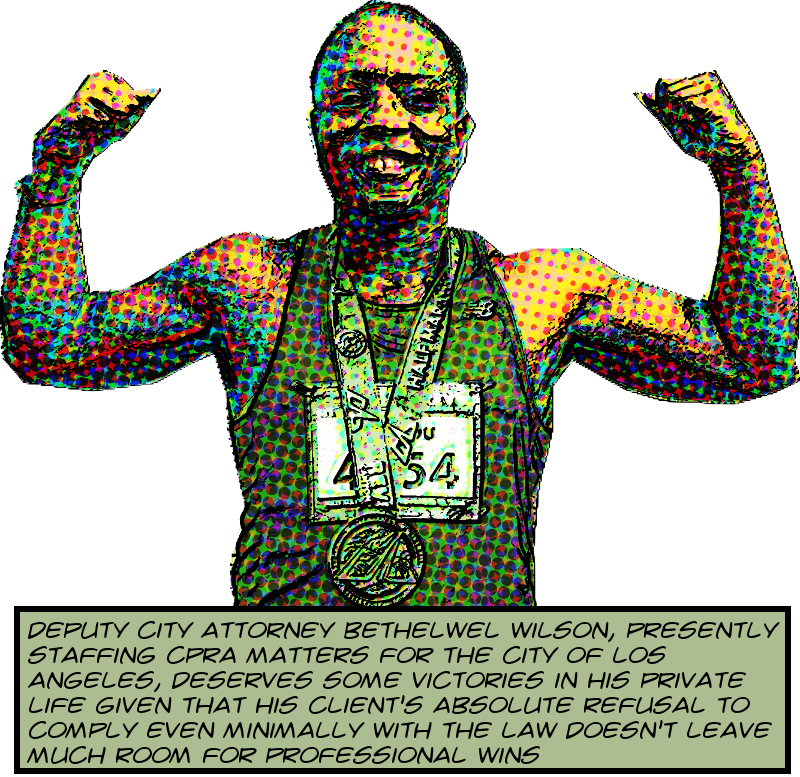 Recall that in June of this year I was forced by the utterly indefensible intransigence of Gil Cedillo staffer Mel Ilomin, who would persist in his bizarre claims that some emails between his office and LAPD were exempt from production under the California Public Records Act, to file a writ petition seeking to enforce my rights under that hallowed law. And less than a month later the City caved and produced a bunch of emails.

Which, as you may know, makes me the prevailing party which, as you also may know, means that the City must pay my attorney’s fees and the court costs, which they just recently did to the tune of $4,720, and here is a copy of the settlement agreement laying out the terms.1 And one of the tragic aspects of this basically silly little case is that they have not mended their ways in the least. City offices continue to make totally bogus exemption claims for which the only remedy is another suit. And if that’s what the City wants, well, I’m not going to be the one to disappoint them.

Oh, yes, the interesting thing about that settlement!2 So the CPRA imposes various duties on local agencies, local agency being something of a term of art in CPRA-ology3 meaning “entity subject to the CPRA.” Like for instance, when a local agency receives a request, the local agency must respond in ten days.4 And when a local agency once releases some records to any member of the public, then by law the local agency has thenceforth and for all time waived the possibility of claiming exemptions and must therefore release that same record to anyone who asks for it.5

But if you have spent much time roaming the pleasant CPRAiatic fields of the City of Los Angeles you will know that they do not, will not, possibly can not, comply with either of these requirements. Just, e.g., look on NextRequest to see innumerable requests made by poor unsuspecting souls and closed out by the selected department because some other department is the putative custodian of records. Like 19-4819, just for instance.

The clerk closes these requests out, all the departments on there do, with an instruction to ask some other department. But it seems pretty clear to me that by the explicit terms of the law, the obligation to respond attaches to the City when the City receives the request. It’s a violation to refuse to respond to the request just because the requester didn’t pick the right City department to submit it to. If the City’s theory is correct then they could put off responding practically indefinitely by continuing to tell requesters to ask someone else.6 But we must assume the legislature meant that 10 day response time to mean something, so it can’t be possible under a correct interpretation of the law to put it off indefinitely.

Or similarly, look at the public comment in various Council Files. Not one of the email addresses is redacted ever. And yet just ask a Council office for some emails. In fact, why not pick an email address out of a public comment and ask the sponsoring Council office for emails from that correspondent? They will proceed to painstakingly redact every instance of every non-City email address, whining incessantly as they wield their markers about how much work you’re forcing them to do.7 But, as I said, the exemptions they rely on to redact those email addresses have already been waived by the City’s publication of them on the Clerk’s website.

From time to time I have raised these arguments with various City departments and even a Deputy City Attorney or two. And mostly they just ignore me, but once upon a time DCA Mike Dundas, who was at that time staffing my CPRA requests but has now departed that scene, leaving me in the exceedingly-but-not-more-so aggravating hands of Bethelwel Wilson, pictured above, actually did answer me. And he revealed the grand galaxy-brain theory on which the City of Los Angeles relies to justify its abject failure to comply with the two code sections discussed above. What Dundas told me is that under the law8 each department of the City is its own local agency. So a waiver by one doesn’t constitute a waiver by any others. And receipt of a request by one doesn’t bind any of the others.

It seems pretty clear to me that this is ad hoc bullshit, and if they keep it up, well, eventually we’re going to find out if it appears that way to a judge. And I doubt that Dundas or anyone else over at the City Attorney’s office put a moment’s thought into this argument before hammering it out in a fevered round of kitten on the keys9 and slamming it off to me in an ill-considered email.10

Which brings us back to that damn settlement and its one interesting sentence.11 Written, in case you were wondering why his picture graces the top of this post, by Deputy City Attorney Mr. Bethelwel Wilson, it begins with the following morsel of unprofessional petulance:

This Settlement Agreement and Release of Claims (“AGREEMENT”) is entered into by and between MICHAEL KOHLHAAS (“MIKE”), on the one hand, and THE CITY OF LOS ANGELES (“City”), erroneously served as “Los Angeles City Council,” on the other hand. (The City is referred to as “Respondent.”

But if Mr. Wilson were being consistent, and some degree of consistency must be required here, he oughtn’t to have admitted that the City of Los Angeles has anything to do with this request. Or, of course, that the City Council does. He should clearly have insisted that the actual party to be sued was CD1. According to Mr. Dundas’s argument, after all, it’s CD1 that’s a local agency under the law. Not the City Council, true, but certainly not the City of Los Angeles.

But this is the kind of thing that happens when people, like every single DCA in the City Attorney’s office that staffs CPRA requests, rely on ad hoc bullshit to justify their already-determined actions rather than reasoning or rules. Their goal is to keep records out of our hands. And that goal determines their actions, not any kind of rules. But it can be made expensive for them to operate this way, and maybe that will make them stop fooling around and follow the damn law which, after all, would be best for everyone! Until then, though, essentially the City is paying a bunch of lawyers to dismantle their outlaw CPRA regime, just like, as Lenin famously seems not to have actually observed, the capitalists will sell us the rope with which we shall hang them.14

Image of Deputy City Attorney Bethelwel Wilson is ©2019 MichaelKohlhaas.Org and is to the usual extent somewhat resemblicationally related to this item.