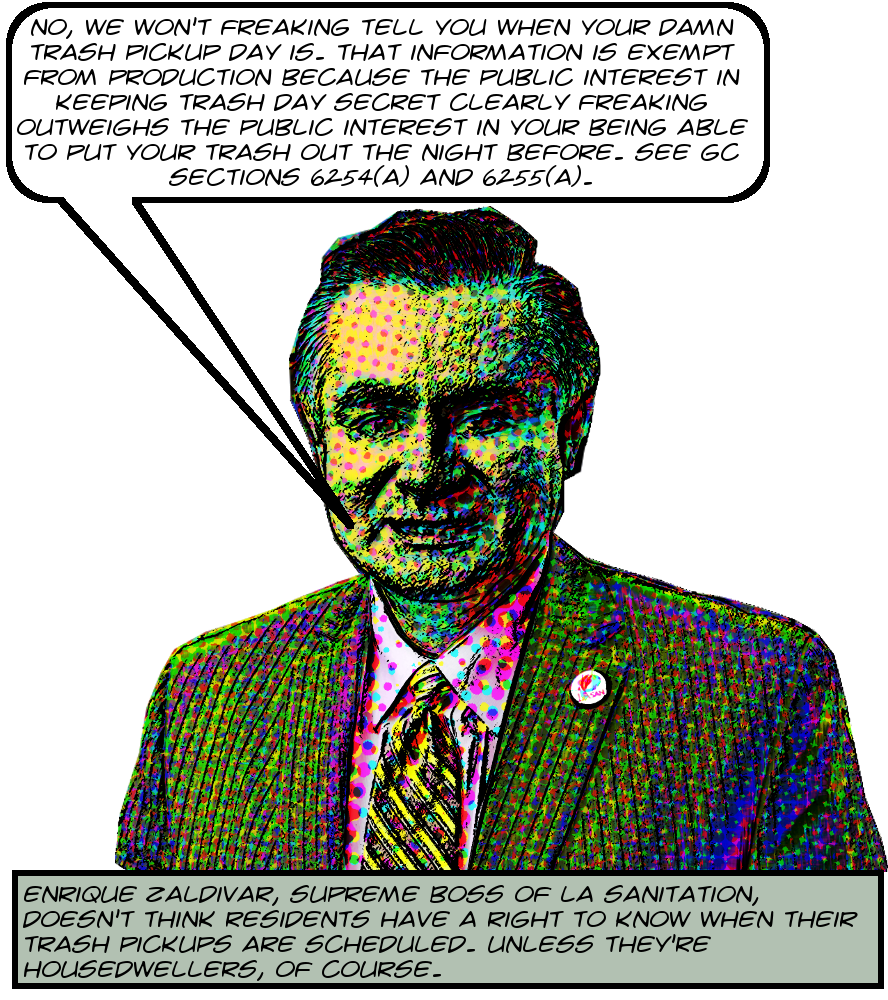 I have been trying to use the California Public Records Act to get advance notice of homeless encampment sweeps for three years now. After a few months of arguing with LA Sanitation, in 2016 I actually managed to get a schedule one day in advance. I went out and filmed the whole thing, but then the City went back into full metal obstructionism and refused to hand over another advance schedule.

So I’ve been pushing them on it since then without making much progress. I did, however, get them to agree in principal that some of the records containing advance info about scheduled sweeps was not exempt from production. However, and frustratingly, this did not lead to my actually gaining access to schedules in advance. But in June of this year a lawyer, Michael Risher, agreed to help me out, and he evidently acted as a catalyst.

He wrote them a demand letter and they dragged their feet and dragged their feet but eventually did make various concessions, although still did not produce. One thing led to another, and we came to the conclusion that I would need to go to the Public Works Building in person and demand to see the schedule. I gave Sanitation notice that I would show up this morning at 7 am to look at today’s confirmation sheet.1 I showed up as promised, and after about 15 minutes of confusion with the guard, she let me go upstairs.

I found the guy who was supposed to meet me and he stuck me in a conference room with a folder containing some papers. One of these items is immensely valuable. It is the list of encampments that have been posted to be swept on September 3, 2019.2 However, the confirmation sheet was not among the records they produced. Since seeing this schedule was the whole point of the exercise, and since they had already agreed to produce it, I asked the guy where it was.

He, in what would turn out to be a theme for the visit, mumbled some half-garbled nonsense about how it wasn’t in final form so they weren’t required to produce it. Not that it’s my job to interpret their nonsensical exemption claims, but this one is obviously a half-baked handwave roughly in the generally approximate direction of §6254(a), which allows the City to refuse to produce:

But it surely fails the criteria for the exemption. There is essentially no public interest at all in withholding these schedules, and the public interest in obtaining them in advance is immense, beyond immense, cosmic. But one can’t, and there’s no reason to try anyway, explain this kind of thing to City staff mostly, so I just told him that it didn’t matter if it were in final form or not. If they had it they had to produce it. He went out and, I assume, called someone, and then, amazingly, agreed to let me see it.

So here, friends, it is. Today’s cleanup schedule: Page One and Page Two. Now, this is mildly disappointing because there are no encampment sweeps listed here.3 In fact the title only mentions ID cleanups, which is City slang for Illegal Dumping. But the guy told me that they don’t generally do encampment sweeps on Fridays and that they weren’t withholding anything. This is actually consistent with other confirmation sheets I’ve seen, so it’s at least plausible that the guy is telling the truth.

Anyway, as a proof of concept obtaining this confirmation sheet on the day of is immensely important, and we4 need to get these every day. So I told the guy that I would be in on Tuesday at 7 am and that either I or someone else would be in every weekday morning at 7 to see that day’s schedule. And then the guy, who obviously has a vast and seething stew of fragmentary obstructionist bullshit poured into him by the City Attorney and roiling around in his head like pre-blown chunks in the capacious belly of a USC fratboy at 4 am Sunday morning, mumbled something about how they’re not required to agree to a standing request for records.

This is a vague wave in the direction of the well-known principle that the Act doesn’t cover records that haven’t been created yet. So I told him that I wasn’t asking him to produce not-yet-created material, but that I was putting him on notice, even though I was not required to do so under the law, that someone was going to come look at that day’s material every day. We shall certainly see what happens.

But the other, and the more important, thing that I learned on my trip is that these confirmation sheets are certainly produced the day before the day they’re about. Everyone at the City has told me that they’re produced the day of, but this guy told me that none of the staff were around except for him, and mostly the staff didn’t start coming in until 7 am on workdays. But then he actually gave me today’s confirmation sheet.

So if no one was in the office, and it was certainly deserted, and the record existed this morning, it must have been produced no later than yesterday and possibly even before that. This is essential information, and the next stage in the project, in parallel with daily visits to see the schedules, is to convince the City that we5 need to come down every weekday afternoon and look at the next day’s schedule. I am working on that now, and will update you, as always, when I have some news.

Image of Enrique Zaldivar is ©2019 MichaelKohlhaas.Org and I totally lifted the incredibly apt comparison between sweep scheduling and residential trash service from this genius tweet by @andonehalf13 Oh yeah, also this.

One thought on “How I Finally — For Only The Second Freaking Time Ever — Got Advance Notice Of Some Homeless Encampment Sweeps From LA Sanitation Via The Public Records Act After Three Long Years Of Fighting With Them About It — And How They Told Me That I Couldn’t Look At The Next Day’s Schedule But Only Today’s — So I Showed Up At The Public Works Building This Morning At 7 AM And Eventually Did Get To See The Schedule — Which Is A Huge Breakthrough! — But It Also Became Clear That They Have Not Been Fully Honest In Their Claim That The Schedules Aren’t Produced In Advance — So The Next Phase Is To Get The Next Day’s Schedules Each Afternoon”