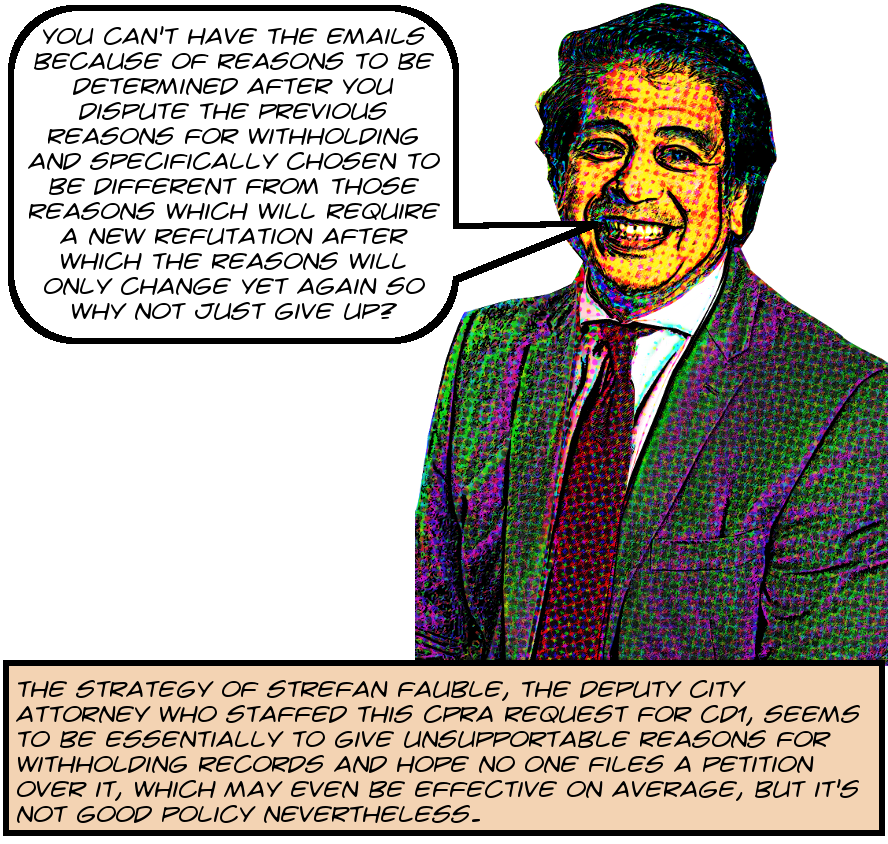 As you know, one of my long-term projects is using the public records act to understand how and why the City of Los Angeles schedules sweeps of homeless encampments and related enforcement actions. Emails between Council offices and either LAPD or LA Sanitation have been essential in this effort. For instance, a monumental recent email release from LAPD revealed a number of essential facts.

First, that CD11 staffer Taylor Bazley, despite official denials, had been complicit in the illegal placement of anti-homeless planters in Venice. This revelation led, in turn, to my filing a complaint against a list of LAPD officers with the Internal Affairs Division and a complaint with the Ethics Commission against Bazley. These same emails revealed that CD11 itself had been illegally withholding incredibly important records in the face of a number of my pending CPRA requests, which led to my filing another writ petition against the City seeking to compel the release of those materials.

And also, there among these 1,200 pages of stuff, were a couple emails between CD1 staffer Jose Rodriguez and a couple of police officers, Arturo Siguenas and Ruben Arellano, about homeless encampments and sweep scheduling at an encampment on Avenue 61 between Figueroa Street and Piedmont Avenue, one block to the North. Here’s the first one and also the second one. These emails in themselves are fairly innocuous, but since other emails in the release had turned out to be so very consequential, and since CD1 is a particular interest of mine although not, so far, with respect to homelessness, the importance of tracing this thread further was quite clear.

Thus I sent a request for all emails between Rodriguez and these two officers from between January 1, 2018 and April 30, 2019, the day before the date of the request:1

And the very next day, rather too quickly for my taste,2 Mel Ilomin came back with a refusal:

Unfortunately, this request for emails between Jose Rodriguez and two LAPD officers are documents exempted under Section 6254 covering Law enforcement investigation and intelligence records. This request is considered closed.

The exemption he’s invoking there is the infamous section 6254(f), which allows most investigatory material to be withheld. It’s painfully obvious from reading the statute, which is long and I’m not going to quote it here, that it’s about internal cop files. Like they’re investigating a crime and they take notes and make photographs and interview witnesses on tape and so on. The process generates a lot of records, and this section exempts them from the CPRA.

I don’t like it, but I can see the value in it if it’s applied honestly. But really, take a look at the two emails I did obtain that would satisfy the request. They’re just ordinary commo between Council staff and cops about sweeping an encampment because of constituent complaints. There’s no crime being investigated. Nothing’s being investigated. The exemption claim is ridiculous. And not only that, but the City already released at least these two emails, so they don’t have a basis for withholding those in particular.3

I pointed all this out to Ilomin, and he told me that Strefan Fauble told him to say that not only was the material investigative, but it was also exempt due to the putative deliberative process exemption and as putatively official information. I don’t want to get into an analysis of the precise degree of ludicrous implausiblity displayed here.

The main thing that was clear from Ilomin’s response is that no one had actually looked at the responsive emails to see if these claimed exemptions applied. The law requires that the local agency examine the actual records and determine exemptions for each one individually. These sweeping theory-based exemption claims are not allowed. We went back and forth about this for a while, but nothing came of it. Thus I had to file the petition. I’ll let you know how it goes!

Image of Cedillo staffer Mel Ilomin is ©2019 MichaelKohlhaas.Org and is roughly based on this Mel Ilomin here.