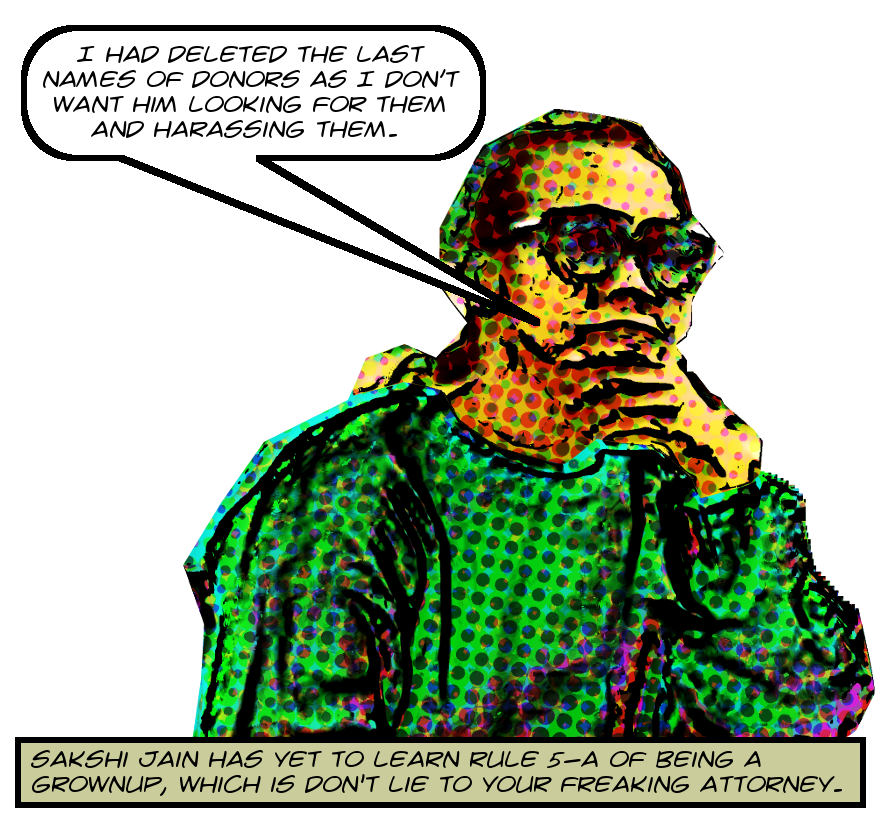 Yeah, the headline has the story! Here’s the background! Noted galaxy brain Sakshi Jain is starting a charter school in the City of Carson. It’s called GANAS Academy, and it’s putatively going to co-locate on the campus of the well-beloved neighborhood school Catskill Elementary. But the Catskill folks aren’t taking this quietly. They’re kicking up a damn storm, and rightly so! And I’m investigating right and investigating left and investigating all over the place because who can gaze approvingly upon themselves in the damn mirror in the damn morning if they’re not doing something to thwart these damn privatizers?!

And of course I’m doing my small part by wielding the California Public Records Act like, well, like the California Public Records Act. And in May I got a bunch of emails from the privatizers, and one in particular, this from January 2019, is an important part of the story I’m telling in this post. Therein, you see, amongst other admonitions, did Sakshi Jain admonish her audience thusly: ” If you have not already done so please make your meaningful contribution to the school. The amount of this donation is an amount that is meaningful to you and is not shared with any other board members.”

And a claim like that, that it’s possible for an agency like Jain’s crackpot little charter school that’s subject to the CPRA to keep this kind of crapola secret just because their weirdo sense of what passes for propriety among zillionaires and their willing servants suggests that they ought to do, well, I can’t resist exposing their self-proclaimed but exceedingly putative secrets to the world.

So that very day, the very day I read the email, I popped off this request for records to Jain and her lawyer, the bizarre but weirdly well-dressed little dude known in some circles as H. Wayne Strumpfer, who is of counsel1 to the world’s most privatizing law firm, Young, Minney, and Corr, asking for the damn donation records.

And this very morning, El Strumpfer told me (in an email of course) something along the lines of hey friend! Here are your damn donation records! And this is what he sent me! It’s an Excel spreadsheet, which is good, and here’s a PDF of it if that’s easier for you! And you can see that there’s a strange problem with this production, and that is that none of the donors have last names!

And not only that, but there’s a suspiciously blank column where their last names would be if Sakshi Jain weren’t such a sneaky little liar. And as you may know, the CPRA absolutely explicitly forbids redacting, omitting, or withholding any record or part of a record without invoking an exemption enumerated in the act. And in my CPRAiatic2 lifetime I’ve had much more flimsier flams than this kind of thing pulled on me with respect to totally bogus exemption claims so I just assumed that’s what these geniuses were up to, but they hadn’t said anything about it.

So I got ready to argue with Mr. S. about this, and then transmitted this pretty calm little message basically asking why no last names and were they claiming any exemptions? And Mr. Of Counsel took exception to my question! And he was all like dude, if we’re going to claim exemptions we will say so and therefore never ask us or I will get mad! And clearly he was already mad because it took him only seven minutes to fire that little return barrage, and when a lawyer, even an of counsel one, starts answering within seven minutes you know they’re freaking mad.

So I was all like, well, read it yourself if you want to, because after I was all like that the whole thing went off the rails in a really unexpected manner! Ms. Sakshi Jain, who by the way I forgot to mention everybody was CCing like crazy for whatever reason, sent this email to me alone, which clearly she meant to send to Mr. Of Counsel alone, and here is what Sakshi Jain had to say for herself:

I had deleted the last names of donors as I don’t want him looking for them and harassing them.

And this, of course, created quite a problem for Of Counsel Strumpfer, which is that he had told me that they weren’t claiming any exemptions, or at least he had created the impression that that’s what he told me, and now here’s his client admitting against her own interest that she redacted material. But the CPRA only allows redactions of exempt material and he’d already told me nothing was exempt. So either he lied or Sakshi Jain lied to him. And I favor the latter option because it’s way more realistic. And that’s the kind of person who’s going to be running this infernal school, friends: a liar who exposes her own mendacity because she’s bad at email. Cool, eh?

Oh, of course, the epilogue is that I forwarded Jain’s email to Strumpfer and a mere 47 minutes later H. Wayne emailed me with the list of donors with their actual last names and one of those non-apologies that I’m sure they have a whole damn workshop about in law school. And so now that we’ve made it this far, let’s get back to the original point, which was that despite Jain’s promise that no one would ever know how much these dupes donated to her weirdo school, I was going to expose their amounts to the world and to one another. So hey! Friends of Sakshi Jain! Here’s how much your meaningful donation is! Have fun seeing whose is bigger! 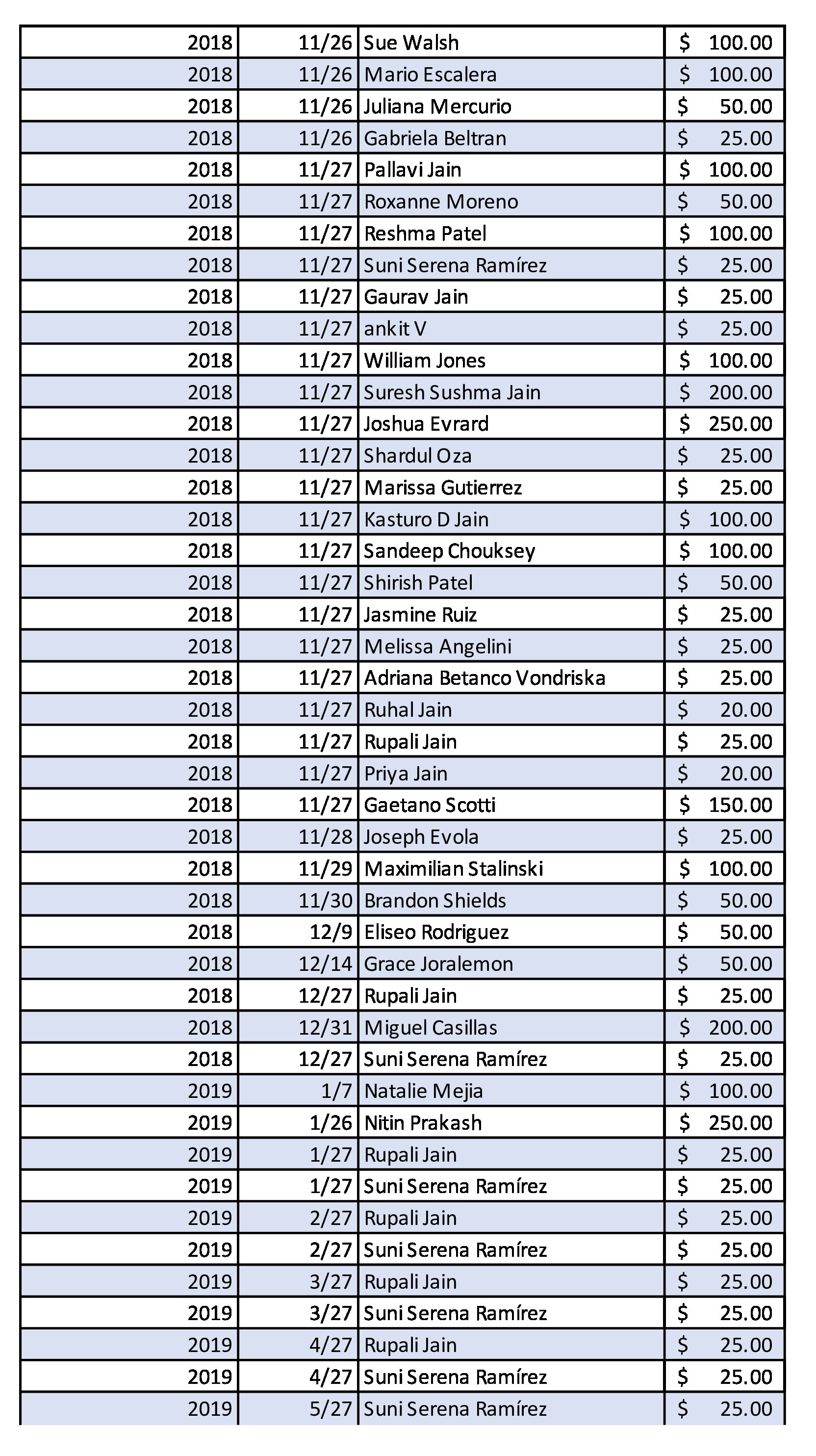 Image of Sakshi Jain, AKA She Who Lies To Her Lawyer, is ©2019 MichaelKohlhaas.Org and has an undisclosed prior relationship with this SJ here.