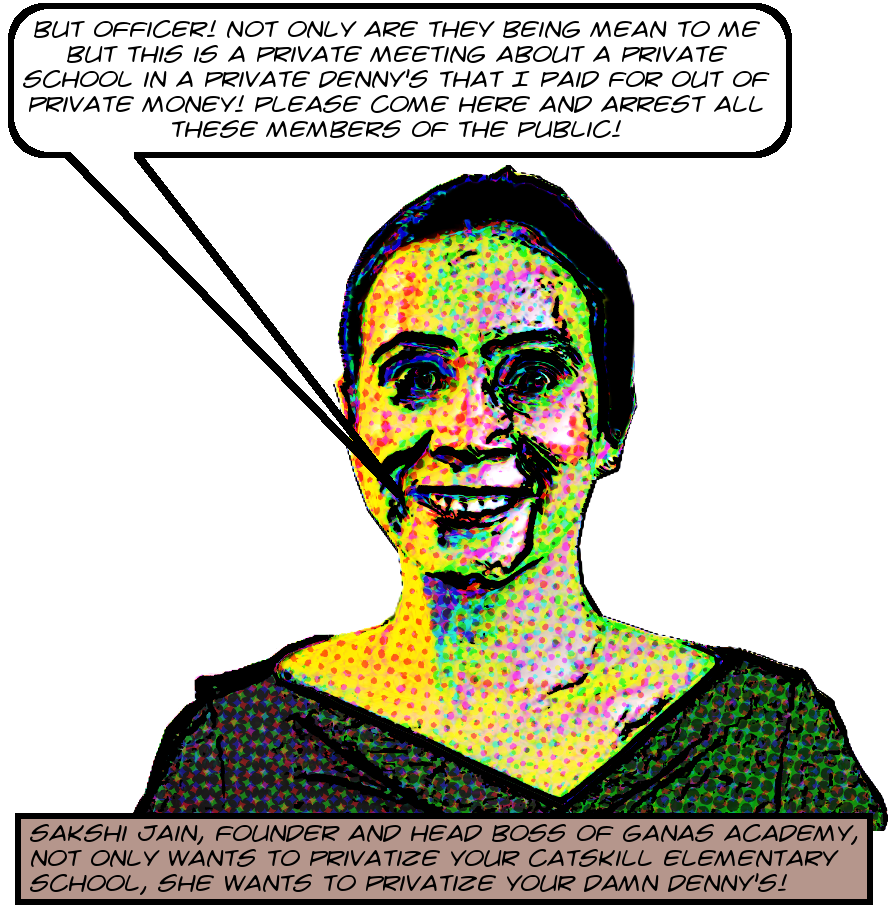 I don’t know if you’ve been following the thrilling tale of privateering charter school Ganas Academy, its astoundingly unsympathetic founder Sakshi Jain, its misbegotten plans to co-locate at the well-loved Catskill Elementary School in Carson, and the refreshingly vigorous battle being waged by a brave and devoted band of parents and teachers pushing back against the privatizers. But if so, well, today I have an interesting bit of information on one episode in the struggle.

It seems that on March 27, 2019, Sakshi Jain and her co-locationist co-conspirators were holding a meeting of some kind at a Denny’s in Carson. And the Catskill supporters showed up to protest. And because she hates the public realm Sakshi Jain didn’t appreciate this. She didn’t like it one bit. And so, in the grand tradition of life-denying totalitarians everywhere, she called 911 on the protesters.

And today I am pleased to present to you a copy of that 911 call! You can listen to it here on YouTube, and download it here on Archive.Org in whatever format suits your needs.1 And it’s really heartening, actually. Jain tells the dispatcher that there are protesters at this Denny’s and the dispatcher keeps telling her that protesting isn’t illegal and they won’t be able to do anything.

Jain can hardly believe her ears. She keeps saying that it’s a private event! In a private Denny’s!2 That she paid for! None of this is surprising coming from a woman who hates the public realm so much that she wants to make a living by privatizing public schools, but it’s a little shocking to hear it said out loud.

And I also have a copy of what the responding deputies sent to dispatch when they closed out the call, which was that they didn’t do anything because the protesters weren’t breaking the law. If you don’t feel like playing the audio there’s a transcription right after the break!

Dispatcher: Hi, this is Sheriff’s [unintelligible], how can I help you?

Sakshi Jain: Hi, I’m at a Denny’s in Carson and we’re having a private event that is being bombarded by protesters who are harassing us and making videos.

Dispatcher: OK, I’ll send deputies out there but you know protesting is not illegal. But I will…

Sakshi Jain: [interrupting] We understand but we’re at a private event so they’re trying to crash it.

Dispatcher: OK. And do you own Denny’s? Are you working there? Or are you just there having the event?

Dispatcher: OK. What’s the address there?

Sakshi Jain: Alright, excuse me? The address? Yeah, hold on one second.

Dispatcher: And what’s your name while you’re getting it?

Dispatcher: And what’s your phone number?

Dispatcher: OK, I’ll send someone out there to talk to you guys.

Image of Sakshi Jain on her bullshit is ©2019 MichaelKohlhaas.Org and she looks even crazier in the damn original!