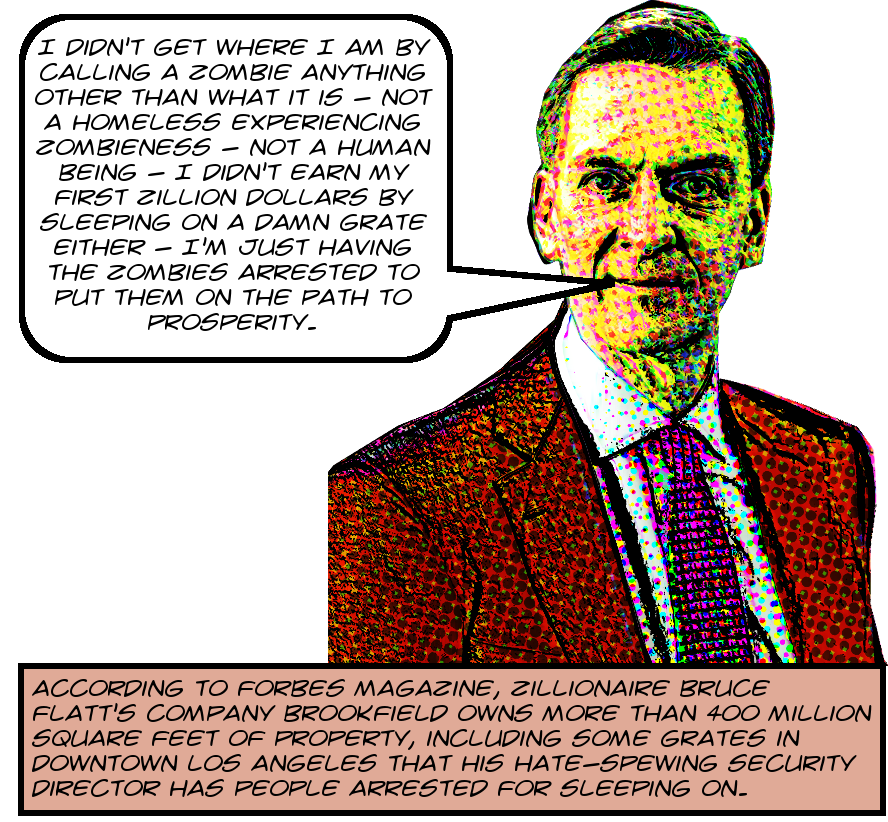 Brookfield Property Partners is yet another faceless bunch of zillionaires who own everything while so many have nothing. According to Forbes Magazine they own 8.3 million square feet of commercial property in Downtown Los Angeles, including a building at 333 S. Grand, right there in the good old Downtown Center BID, which evidently has some grates in front of it.

And on December 6, 2018, around 4 or 5 a.m. when it was raining and foggy and cold, evidently some homeless human beings slept on those grates, presumably trying to stay alive by staying warm. But according to Paul Burr, assistant director of security, in an email he sent that day to Jorge Castro of the BID they ” made the shuttle workers very uncomfortable”. So he asked Castro to arrange for “a patrol to rouse them at that time and get the area clear”

And Castro did as he was asked to do, forwarding the email on to Adrian Marquez, the BID’s director of safety services, and Marquez, by return email, agreed to the plan. That’s an ordinary story, repeated many times every single day of every single year in Los Angeles and everywhere else in the world where zillionaires and their victims are forced to exist in close proximity.

It’s also not a surprise to see hateful zillionaires using language associated with disease, inhuman mindless predators, infestation, and so on, when they’re talking about human beings who happen to presently not have an indoor place to live. The subject line of Burr’s emails is a particularly graphic but sadly not unusual example of this: “Zombies on our Grates”.

It’s not even surprising to see BID staff ignoring Burr’s dehumanizing language. But that doesn’t mean it’s acceptable. BIDs are public agencies.1 They’re funded with public money. The City of Los Angeles allows them to wield municipal power uncontrolled in any practical sense by political processes. And all that public power, all that public money, is in this instance in the hands of the Board of Directors of the Downtown Center BID, guided by its chair, Brookfield senior vice president Robert Cushman.

So what we have here is an organization, Brookfield, whose local boss, Robert Cushman, controls vast amounts of public money and power, most of it spent in opposition to homeless human beings forced to live on the streets by the very economic policies that Brookfield thrives on, employing people who, as revealed by their unselfconscious language, don’t think of those homeless people as human beings at all, let alone as equal citizens of the City of Los Angeles, but rather as mindless inhuman disease vectors.

These are the people that the City of Los Angeles chooses, by a process guaranteed and likely intentionally designed to promote white supremacy, to spend our money, to wield our power, against us, people who live here.. I do not, will never, understand how anyone thinks this is OK. But you knew that, I’m guessing. Read on for a transcription of the entire conversation.

Good Morning. Need your help on Lower Grand at around about 4:30 to 5 a.m. We have those individuals sleeping on our grates. They have now made the shuttle workers very uncomfortable. Can I get a patrol to rouse them at that time and get the area clear? It has become a big concern at this time.

Give me a call

Can you please make overnight crew aware and have AM crew do follow ups as well.

We will advise the staff

Image of Bruce Flatt is ©2019 MichaelKohlhaas.Org and here’s the counterpoint.