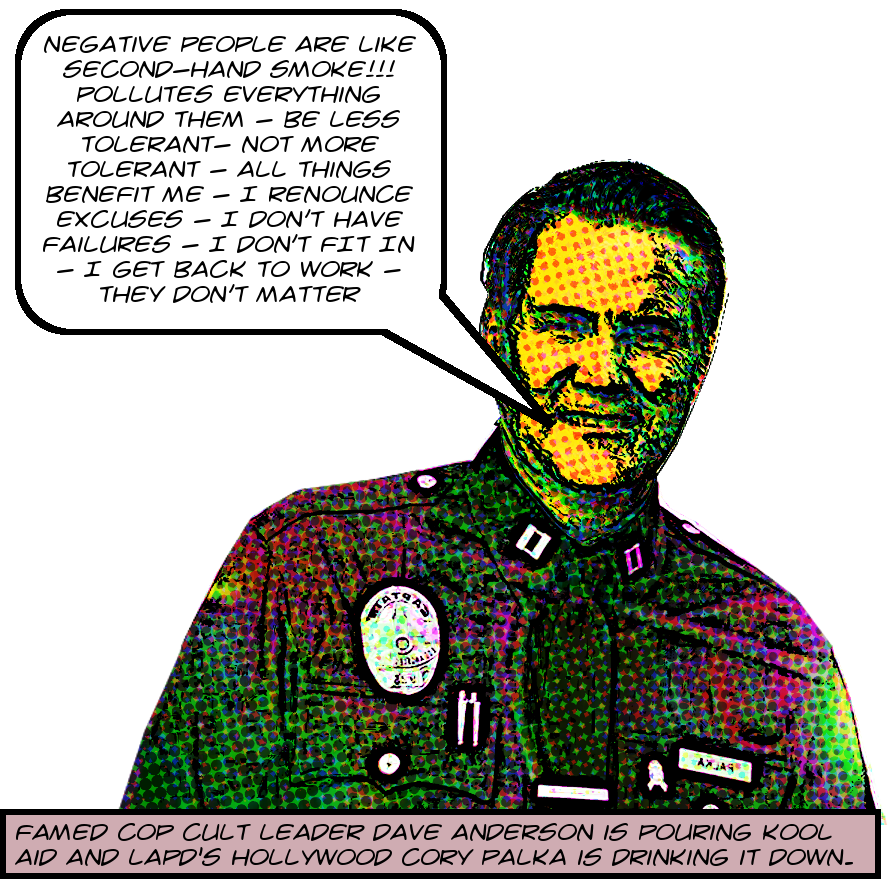 One of my long-running projects is identifying Los Angeles City officials who’re using private email accounts to conduct public business and, per the transcendentally monumental 2017 opinion in City of San Jose v. Superior Court, obtaining copies via the California Public Records Act. So far I’ve learned that Mitch O’Farrell does this, as do both David Ryu and Gil Cedillo as well. I also have some suggestive but not conclusory evidence that Eric Garcetti uses ericgarcetti@gmail.com for public business, and I am continuing to investigate.

And today I have another account to reveal, along with a set of emails. The account is cpalka@me.com, belonging to LAPD Hollywood Division Captain Cory Palka, famous for, among other things, following any number of white nationalists and Trumpistas with his blue-checked LAPD Twitter as well as sharing a warped racist sense of humor with a bunch of white supremacist BIDdies. You can browse and download the release on Archive.Org and read on for some selected gems!

☆ Here’s the 2015 proposed memorandum of understanding between the LAPD and the LA Police Protective League in handy table form. From this I learned, among many other fascinating facts, that the LAPPL bargains for a minimum LAPD overtime budget. Clearly workers need to be paid for their work, but cops are famous for overtime abuses and if the money’s there then it’s going to be spent, so this seems problematic. And what is up with the fact that “City and Department have no ability to furlough officers”?

☆ Here is a twenty two (22) page so-called Christmas Quiz about Cory Palka. It’s a Cory Palka trivia extravaganza, apparently prepared for one or more of his children. Is this normal in some cultural tradition that’s hitherto unknown to me? Or is it as weird as it appears? Is one supposed to make one’s kids learn this kind of stuff about one? Is this why I’m a failure as a parent? From this quiz I learned that Cory Palka and I graduated from the same high school. But we sure didn’t learn the same damn lessons.

Also he’s a picky eater and even as an adult he thinks it’s cute. Don’t know which is worse. He’s got his retirement date planned and it’s in 2020, 2021, or 2025. He was suspended for two or more days and there’s a list of five things he might have done to cause this (see pages 10 and 11). He’s obsessed with Neil Diamond. And it’s not all just stupidity, not all just a quantum narcissism shift, not merely a thermonarcissistic weapon. He’s also a racist asshole and it really shows:

☆ LAPD Discovery assured me that the only reason anything was redacted from this set of stuff was the nebulous and mostly bullshit exemption claim, not found in the law, of “privacy.” This little item, which is four pages of black bars, casts some doubt on the veracity of that representation. 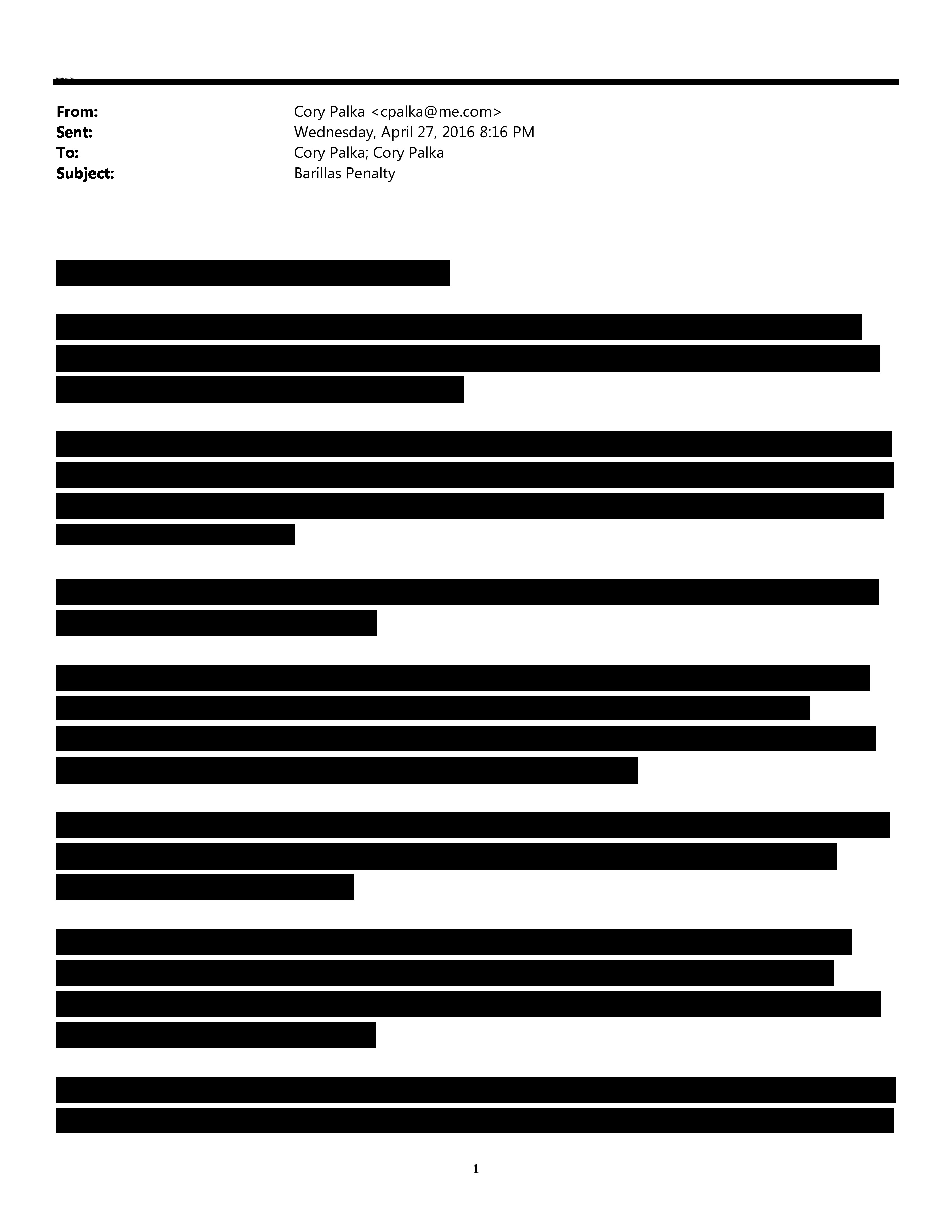 ☆ Notes on how to spin burglary stats in the Hollywood Hills. Fewer arrests than previous year with highlighted note to NOT SAY THAT. Also SLOs and HOPE teams are being “proactive towards homeless encampments.” Which is pure pandering to the zillionaires since I really really really doubt that encampments in the Hills are a significant source of burglaries. Also, why are the HOPE teams involved in what’s clearly a criminal law enforcement matter?

☆ Essay by supercop Edward J. Prokop. Not going to go into much analysis because life’s short, but here’s a selection:
We are a significant force capable of employing tactical resources to address any contingency which has been a template for other cities around the world. But without strong relationships, partnerships and intelligence sharing, this significant and costly venture of ensuring the safety of the second largest city in the nation would fall prey to complacency, insularity, and irrelevance. It is these human relationships that will carry us through the homeland security challenges that are omnipresent in our city today.

☆ Homeland Security Update for the 2018 Oscars Ceremony published by the Los Angeles Office of the FBI. This is six pages of unadulterated bullshit followed by one of the most amazing artifacts I’ve had the pleasure (?) of seeing in lo, these many long years of reading other people’s email. It is, and I am not making this up, an official FBI Intelligence Products Customer Service Satisfaction Survey, featuring such momentous questions as “Product’s responsiveness to your intelligence needs”, rate from very satisfied to not satisfied. 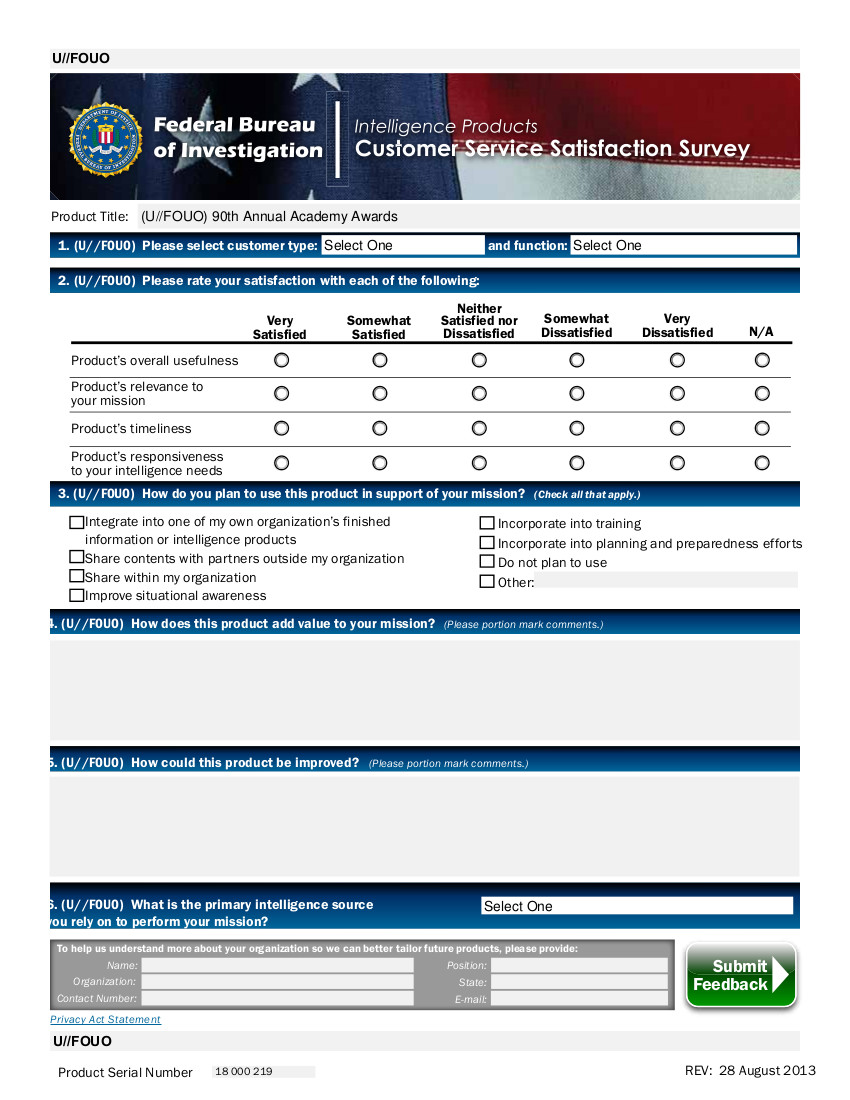 ☆ Cory Palka’s notes from a Dave Anderson seminar he went to called Mission Unstoppable. He sent these to his cop buddies Habib Munoz, Jonathan Larsen, Michael Ling, and Brian White. Anderson, if you’re not familiar with the guy, is a motivational cop cult leader, worshipped by militarized police across the country. Anyway, it’s page after page after page of precisely the kind of crap you’d expect it to be, so I won’t bore you with the details, although I highly recommend that you spend some time boring yourself.

☆ Here’s police officer Matthew Rejis in communication with some lady at Twitter trying to get Cory Palka’s account verified, so he can have the coveted blue check. Interesting if you’re curious about this process. They have, or had at the time, a special channel for government folks, which is: gov@twitter.com.

☆ In closing, here’s Cory Palka paying $359 for two really good tix to see Drake and Future at Staples Center in 2016. Not gonna make fun of him for this because music is music, friends, and it soothes the wild whatever!

Image of cowboy Cory Palka is ©2019 MichaelKohlhaas.Org and is hooched, skooched, and scaramouched from this lil Cory Palka here.

One thought on “Hollywood LAPD Captain-To-The-Freaking-Stars Cory Palka Uses A Personal Email Address For Official Department Business — cpalka@me.com — Here Are A Bunch Of Emails From That Account — How He Got A Blue Check For His Twitter — Police Protective League Collective Bargaining Demands — His Notes From A Workshop By Cop Cult Leader Dave Anderson — FBI Security Notes On 2018 Oscars — Which Comes With A Freaking “Intelligence Products Customer Satisfaction Survey” — I Swear I Am Not Making That Up — Notes On How To Spin Drop In Hollywood Hills Burglary Arrests — Blame Homeless Encampments Of Course — Oh! — And A Cory Palka Trivia Quiz! — Twenty-Two Pages Of It!”