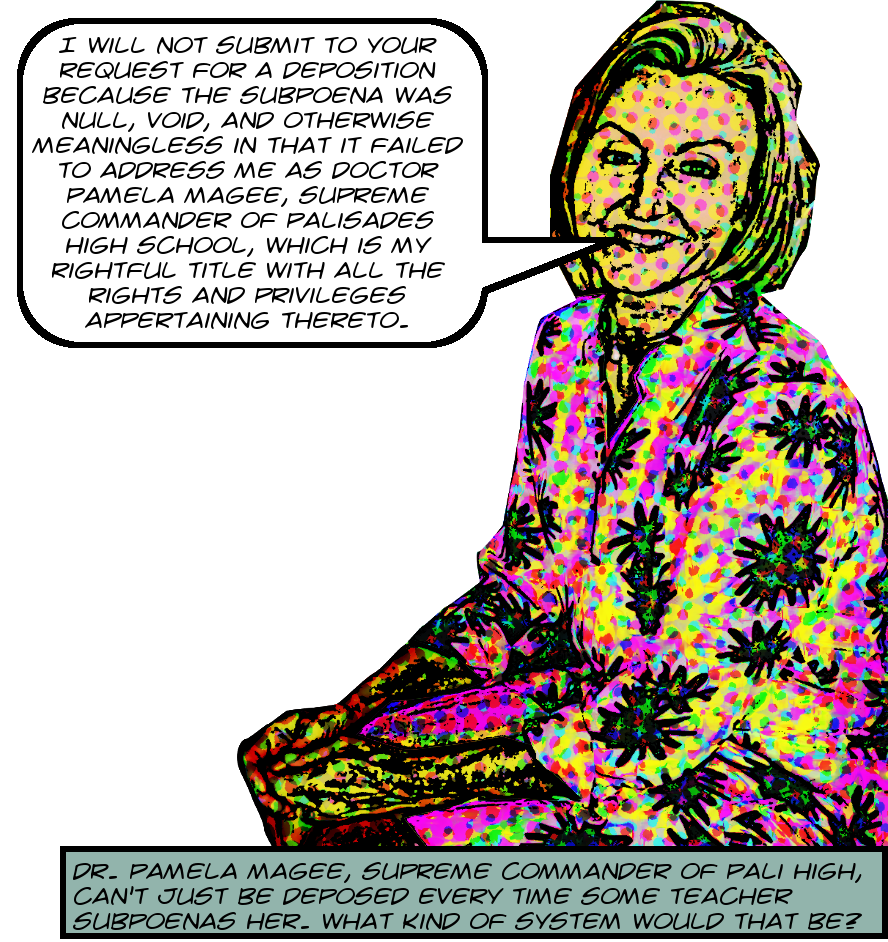 UPDATE: The motion described here was granted on June 24, 2019 and the trial was rescheduled to Monday, August 19 at 10 a.m in Dept. 72, Stanley Mosk Courthouse.

This is just a super-quick note to let you know that Roya Saghafi, former science teacher at Pali High who’s now suing them for racism and other characteristically Palisadesean evils, has filed an ex parte motion asking the court to postpone the trial, now scheduled for July 29, until some time in September.

You can get a copy of the motion here, and there’s a transcription below. The motion is scheduled to be heard on Monday, June 24, at 8:30 AM in Department 72, Stanley Mosk Courthouse. If you’re interested, here’s a copy of Saghafi’s complaint, and another story that’s tangentially about the case.

Saghafi’s motion is pretty interesting, though. One of the reasons for asking for a delay is that Pali High has been uncooperative with the discovery process. Saghafi has not, for instance, yet been able to depose Doctor Pamela Magee, Supreme Commander of Pali High.

It’s also really worth taking a look at Saghafi’s lawyer’s declaration in support of this motion, which has tons of emails and letters between the parties trying to get depos scheduled and obtain discovery materials, mostly to no freaking avail at all.

There aren’t many wholesome reasons for evading depositions, but pretty many unwholesome ones. Anyway, I probably won’t go to this hearing on Monday because it’s at the same time as Jose Huizar’s motion to stay Mayra Alvarez’s case against him, but I will certainly let you know what happened!

Plaintiff Roya Saghafi is a female science teacher from Iran who reported bullying, discrimination, and harassment at the school. Defendants retaliated by, among other things, falsely reporting to the police that Saghafi was a danger to herself or others, resulting in her being confronted at her home by armed officers. Saghafi alleges that defendants discriminated against, and harassed, her based upon her race and nationality.

Saghafi has been diligent in prosecuting her case. However, due to the extensive number of witnesses, discovery delays, and conflicting trial schedules, she needs more time to properly prepare her case for trial. Saghafi respectfully requests a continuance of trial and of the discovery cut-off time, with the trial date to start between September 5, 2019 to September 30, 2019 or at a time thereafter that is convenient to the Court.

Although continuances of trials are disfavored, each request for a continuance must be considered on its own merits. The court may grant a continuance only on an affirmative showing of good cause requiring the continuance. Circumstances that may indicate good cause include: (3) The unavailability of trial counsel because of death, illness, or other excusable circumstances; and (6) A party’s excused inability to obtain essential testimony, documents, or other material evidence despite diligent efforts. Cal. Rule of Court, rule 3.1332(c).

Finally, “Judges deciding whether to grant continuances must balance these factors and not focus on just one, such as the impact on the court’s own calendar.” Oliveros v County of Los Angeles (2004) 120 CA4th 1389.

Saghafi has good case for her request for a continuance because her trial counsel is expected to be unavailable because of another matter involving a minor and, despite her best efforts, she has been unable to obtain sufficient discovery responses to prepare her case for trial. As Saghafi’s trial counsel explains in her declaration, she will likely be engaged in another trial around the scheduled trial in this matter.

Additionally, despite her best efforts, Saghafi has been unable to obtain sufficient discovery responses to prepare her case for trial. For example, Saghafi noticed the deposition of the School’s Person Most Qualified (PMQ) which included a Request for Production of Documents. Ex. 1. But defendants said that hc/shc was unavailable and refused to him/her until after the School had taken Saghafi’s deposition. When the School produced its documents, the Bates stamps indicated that hundreds of documents were not provided. Hull dec. 20. Saghafi notified the School about the problem. The School told Saghafi that it would provide a link to the missing documents but failed to do so..

Saghafi also noticed the depositions of School employees Drs. Lee and Magee. But those depositions haven’t occurred. Without this discovery, Saghafi in unable to
properly prepare her case for trial.

Saghafi asked defendants to stipulate to continue the trial but they refused,
necessitating this motion.

For all of the reasons cited above, Saghafi respectfully asks this Honorable Court to continue her trial until October 20th, 2019, or at a time thereafter that is convenient to the Court.

Image of Ms. Dr. Pamela Magee, Supreme Commander of Palisades High, is ©2019 MichaelKohlhaas.Org and you can just chew on that lil blob o’ fat for a while if you wanna.