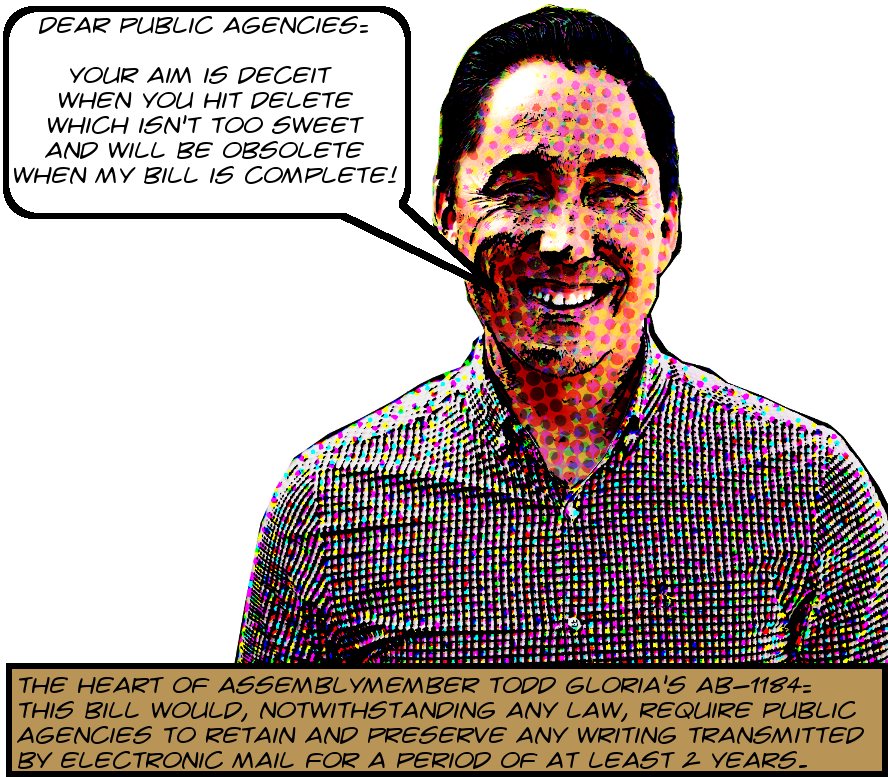 The California Public Records Act explicitly includes emails in the class of records which are open to public inspection. For some reason, though, many agencies are resistant to this idea and think that somehow emails are less recordy than more old fashioned kinds of records. This weird theory, along with the fact that the CPRA doesn’t impose any kind of obligation to retain records on agencies, has inspired bunches of agencies to establish absurdly short retention schedules for emails.

There are plenty of BIDs in the City of Los Angeles, for instance, which claim that they delete emails after 30 days. They’re lying, of course, but the fact that they say this makes it harder to prove that they’re illegally withholding records. And they are consciously adopting these policies to avoid having to comply with the CPRA. For instance, at the famous BID anti-CPRA seminar held by Carol Humiston last summer, she told attendees that:

You do not need to save most emails. If you want to preserve important information that was sent by email, print it out, make a copy, and delete it from your computer.

And evidently this is a problem all over California, although I’m guessing that it doesn’t take such a consistently extreme form outside of Los Angeles. Which is I guess the inspiration for the timely and most excellent AB 1184. Written by San Diego Assemblymember Todd Gloria, this bill would require that agencies retain emails for a minimum of two years.

If you support government transparency, and why would you be visiting here if you did not,1 well, I hope you’ll write or call your legislators and tell them to pass this damn bill. If you don’t know who they are you can find them here. And turn the page for some text!

The California Public Records Act requires a public agency, defined to mean any state or local agency, to make public records available for inspection, subject to certain exceptions. Existing law specifies that public records include any writing containing information relating to the conduct of the public’s business, including writing transmitted by electronic mail. The act requires any agency that has any information that constitutes a public record not exempt from disclosure, to make that public record available in accordance with certain provisions and authorizes every agency to adopt regulations stating the procedures to be followed when making its records available, if the regulations are consistent with those provisions. Existing law authorizes cities, counties, and special districts to destroy or to dispose of duplicate records that are less than two years old when they are no longer required by the city, county, or special district, as specified.

This bill would, notwithstanding any law, require public agencies to retain and preserve energy writing transmitted by electronic mail for a period of at least 2 years.

6253.32. Notwithstanding any other law, a public agency shall, for the purpose of this chapter retain and preserve, for at least 2 years, every writing transmitted by electronic mail.

This act furthers the right of public access to the writings of local public officials and local agencies by requiring that public agencies preserve for at least 2 years every writing transmitted by electronic mail.

SEC. 3. No reimbursement is required by this act pursuant to Section 6 of Article XIII B of the California Constitution because the only costs that may be incurred by a local agency or school district under this act would result from a legislative mandate that is within the scope of paragraph (7) of subdivision (b) of Section 3 of Article I of the California Constitution.

Image of Todd Gloria is ©2019 MichaelKohlhaas.Org and is kind of related to this lil Todd Gloria here.