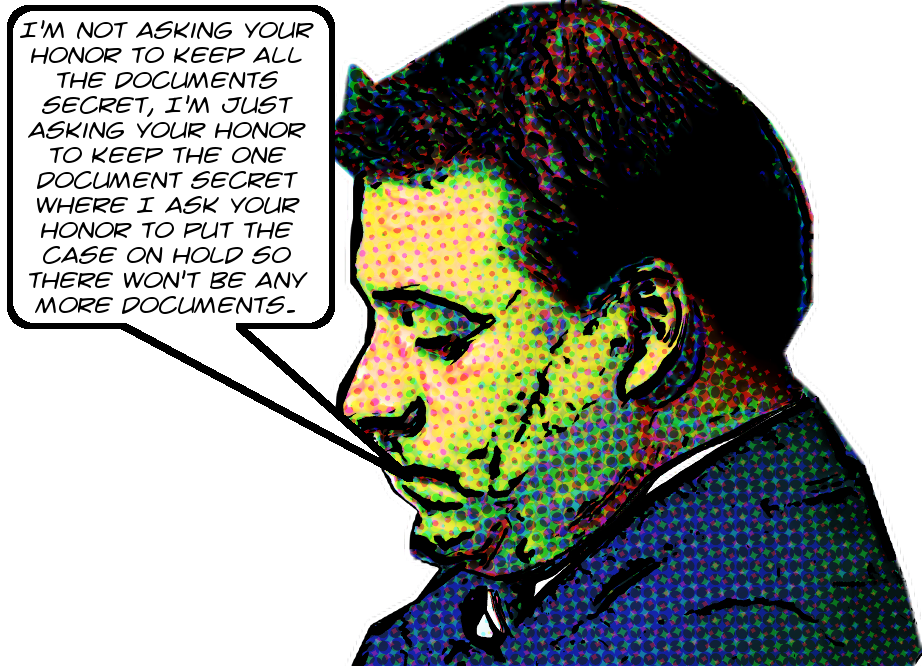 The quick background is this: Soon-to-be-former Councilbro Jose Huizar is being sued by two former employees for generally egregious workplace creepiness. One suit was filed by Mayra Alvarez and the other by Pauline Medina. Of course, he’s also being investigated by the FBI for general criminal kingpinitude. And, according to Huizar, he can’t defend himself against Alvarez and Medina without revealing information that will harm his defense in the not-yet-filed criminal case against him.

Thus did he announce recently that he will be filing motions to stay both civil cases until after the criminal case is over with. However, according to Huizar, he can’t even adequately explain why the civil cases ought to be stayed without revealing the same secrets, so recently he filed motions asking the two civil case judges to allow him to file his motions to stay under seal. The Medina judge denied his request outright but the Alvarez judge scheduled a hearing1 to allow Huizar to present his case.

And so on April 19 Huizar filed his motion asking the court to allow him to file his motion to stay under seal, and you can read the motion here. Interestingly Huizar also requests that, if the court won’t let him file the whole motion in secret, that he be allowed to file only parts in secret, and the parts are listed line by line by line. Interestingly, he also refuses to actually admit that there’s a criminal case being built against him, referring in the motion to a “purported criminal investigation initiated by the U.S. Attorney’s Office and the Federal Bureau of Investigation”

Huizar also somewhat disingenuously argues that he’s not seeking to keep all the paper filed in the case secret, but only this one single motion. He doesn’t mention that the motion he’s seeking to conceal would have the effect of stopping the case, so there won’t be any more papers filed to keep secret.

There is also a transcription of selections after the break. I’m not sure when the opposition to this motion is due, but I’ll post a copy when it shows up. Also, according to the Los Angeles Times, their lawyers plan to intervene and ask the judge not to allow the motion to be sealed. If and when they file any pleadings I’ll post copies of those as well.

Transcription of selections from Huizar’s motion to file motion to stay under seal:

TO ALL PARTIES AND TO THEIR COUNSEL OF RECORD,

PLEASE TAKE NOTICE that, on May 16, 2019 at 8:30 a.m., or as soon thereafter as the matter may be heard in Department 17 of the above-entitled Court, located at 111 N. Hill St., Los Angeles, California 90012, Defendant JOSE HUIZAR (“Defendant Huizar”) will, and hereby does, move pursuant to Rule 2.550 of the California Rules of Court for an Order permitting Defendant Huizar to either:

1. File under seal a motion to stay all proceedings along with all documents concurrently filed therewith; or, in the alternative,

2. File under seal the following portions of Defendant Huizar’s motion to stay:

• Paragraphs 2, 3, 4, 6, 7, which include Ms. Andrues’ thoughts and opinions of the pending criminal investigation in relation to this instant civil case;

b. Declaration of James H. Demerjian:
• Exhibits 1 and 2, which include Plaintiffs discovery request that may reveal confidential information related to the pending criminal investigation that is not yet public; and

c. Portions of the Motion to Stay that reference the sections of the Declarations of Ms. Andrues and Mr. Demerjian that Defendant Huizar seeks to seal, which are cited above:

Image of Jose Huizar is ©2019 MichaelKohlhaas.Org.