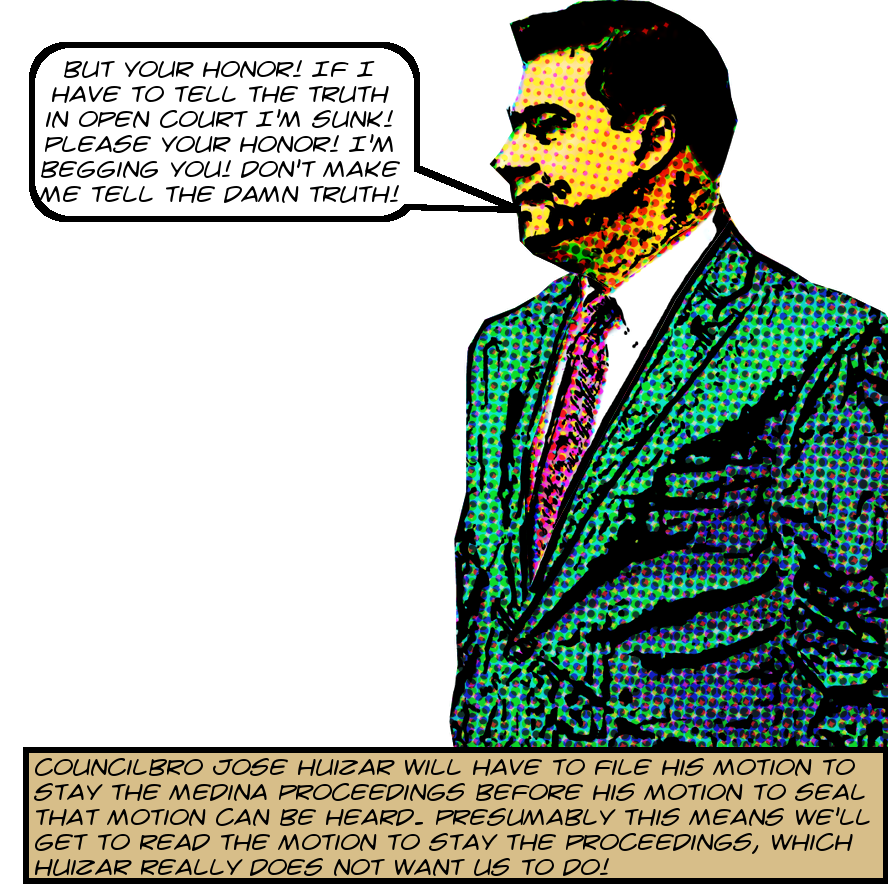 Yesterday I reported that Jose Huizar wanted to put Mayra Alvarez’s lawsuit against him on hold until after his pending criminal problems are done. The reason is that he can’t defend himself without revealing secret info about his criminal case. But he claims that he can’t even support his motion to stay the proceedings without revealing secrets, so he asked the Alvarez judge to grant him an expedited hearing to ask to be allowed to file the motion to stay under seal. That judge granted his request and the hearing will be held on May 16.

But obviously he has the exact same problem with Pauline Medina’s case against him. And not surprisingly he’s trying to set up the exact same solution. His motion to stay the proceedings is due on May 24 but he can’t get a hearing on his application to seal the motion until June, leaving him no choice but to file the motion to stay in public, which, he says, will reveal his secrets to the world, not to mention the FBI.

So he asked the (different) judge to grant him an expedited hearing to consider his application to file the motion to stay under seal. He used the exact same reasoning. But this judge said “No way, Jose!” So presumably he will have to file his motion to stay the proceedings on May 24 in public and we’ll all get to read it. Stay tuned! And turn the page for some links and excerpts.

☆ Huizar application to set hearing on motion to seal

☆ Declaration of Carmen Aguado in support

☆ Notice of ruling against Huizar

Defendant Jose Huizar (“Defendant Huizar”), an elected member of the Los Angeles City Council, respectfully submits this ex parte application to specially set the hearing on his anticipated motion to seal, wherein he will request to seal his motion to stay all proceedings in order protect his private information and constitutional rights, to a date before the May 24, 2019 statutory deadline for service of Defendant Huizar’s motion to stay.

Image of Mr. Huizar is ©2019 MichaelKohlhaas.Org.