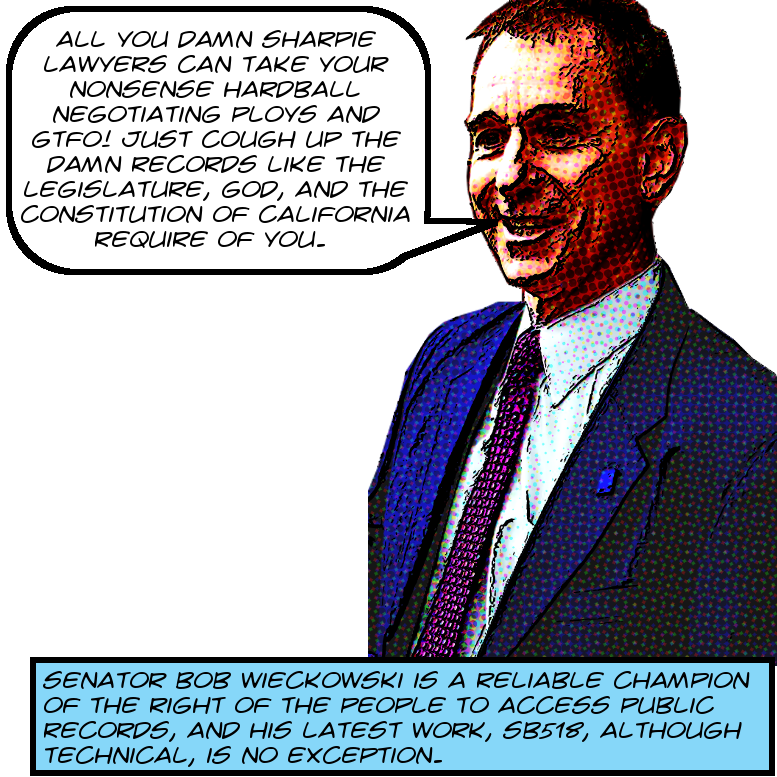 California Code of Civil Procedure §998 authorizes a particularly hardball negotiating tactic in lawsuits in California. One party can make what’s called a 998 settlement offer to the other. If the other party wins but doesn’t get awarded more money than in the 998 offer, the losing party doesn’t have to pay more than the offer. The idea is to encourage parties to seriously consider reasonable settlement offers rather than litigating for the sake of litigation.

And don’t forget that the only mechanism for enforcing the California Public Records Act is by filing a petition. The legislature has made this financially possible by including a mandatory award of attorney’s fees to the requester if they win.1 This is at §6259(d).2 There are built-in protections for requesters as well. Most notably that public agencies can’t recover their own costs from requesters even if they win, except under very rare circumstances.3 This is also found at §6259(d).

Without this potential award of attorney’s fees having court cases be the only mechanism for enforcement would be really unfair. Requesters would have to pay lawyers up front and public agencies would end up ignoring the CPRA altogether except if they thought requesters could afford expensive lawyers. And that would be a really bad outcome. As the CPRA itself says, right up at the top in §6250, “In enacting this chapter, the Legislature, mindful of the right of individuals to privacy, finds and declares that access to information concerning the conduct of the people’s business is a fundamental and necessary right of every person in this state.”

Finally, it is not unheard of for lawyers representing public agencies to make 998 offers.4 When such an offer is received it’s necessary to put some careful thought into rejecting it, because it could end up costing the attorney a lot of money if the fee award ends up being less than the offer. And the serious problem with this is that it could well induce plaintiffs’ attorneys to settle for less money than the case is worth.

In turn, this makes it more difficult for lawyers to be able to afford to take these cases, and this ends up eroding the financial viability of the only CPRA enforcement mechanism available. But judicial enforcement of the CPRA protects a “fundamental and necessary right of every person in this state.” So it’s bad public policy to allow 998 offers in CPRA cases.

Enter state senator Bob Wieckowski. He’s well-known for his attention to essential yet technical flaws in the CPRA. Just for instance, last year he introduced a bill to widen access to records and protect requesters from financial retaliation by public agencies who inadvertently released privileged records. Some aspects of it didn’t survive the legislative process, but it did accomplish its main goal.

And in keeping with this tradition, yesterday, February 21, he introduced SB 518, whose purpose is to outlaw 998 offers in CPRA cases.5 This is really important for all the reasons given above and probably some others that didn’t occur to me. Turn the page for a transcription of the legislative counsel’s digest and of the changes to the statute being proposed.

This bill, for purposes of the award of court costs and reasonable attorney’s fees pursuant to the above provisions, would specifically notwithstand a provision of existing law that prescribes the withholding or augmentation of costs if an offer is made before judgment or award in a trial or arbitration.

6259. (a) Whenever it is made to appear by verified petition to the superior court of the county where the records or some part thereof are situated that certain public records are being improperly withheld from a member of the public, the court shall order the officer or person charged with withholding the records to disclose the public record or show cause why he or she the officer or person should not do so. The court shall decide the case after examining the record in camera, if permitted by subdivision (b) of Section 915 of the Evidence Code, papers filed by the parties and any oral argument and additional evidence as the court may allow.

(c) In an action filed on or after January 1, 1991, an order of the court, either directing disclosure by a public official or supporting the decision of the public official refusing disclosure, is not a final judgment or order within the meaning of Section 904.1 of the Code of Civil Procedure from which an appeal may be taken, but shall be immediately reviewable by petition to the appellate court for the issuance of an extraordinary writ. Upon entry of any order pursuant to this section, a party shall, in order to obtain review of the order, file a petition within 20 days after service upon him or her that party of a written notice of entry of the order, or within such further time not exceeding an additional 20 days as the trial court may for good cause allow. If the notice is served by mail, the period within which to file the petition shall be increased by five days. A stay of an order or judgment shall not be granted unless the petitioning party demonstrates it will otherwise sustain irreparable damage and probable success on the merits. Any person who fails to obey the order of the court shall be cited to show cause why he or she that person is not in contempt of court.

(e) Nothing in this section shall be construed to limit a requestor’s requester’s right to obtain fees and costs pursuant to subdivision (d) or pursuant to any other law.

Image of Bob Wieckowski is ©2019 MichaelKohlhaas.Org and is kind of based on this lil Facebook item.