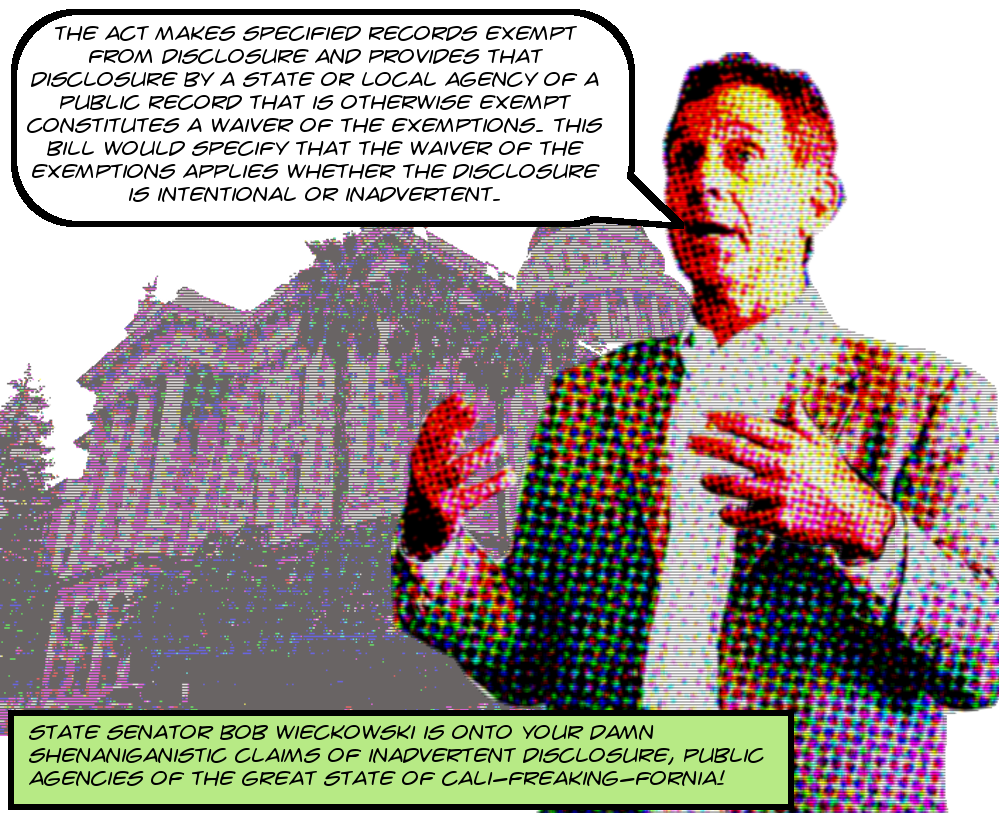 As you may be aware, the California Public Records Act requires the release of all requested public records unless some specified exemption to disclosure applies.1 However, it turns out that, according to §6254.5, if an agency releases exempt material to anyone they’ve automatically waived their right to withhold it from anyone else:

Notwithstanding any other law, if a state or local agency discloses a public record that is otherwise exempt from this chapter, to a member of the public, this disclosure shall constitute a waiver of the exemptions specified in Section 6254 or 6254.7, or other similar provisions of law.

But what happens if an agency releases the material by accident and then other people want it? In 2016 the California Supreme Court decided the issue in Ardon v. City of Los Angeles, holding that inadvertent disclosure didn’t waive exemptions. At that time, the court recognized the potential for abuse2 and warned:

Our holding that the inadvertent release of exempt documents does not waive the exemption under the Public Records Act must not be construed as an invitation for agencies to recast, at their option, any past disclosures as inadvertent so that a privilege can be reasserted subsequently. This holding applies to truly inadvertent disclosures and must not be abused to permit the type of selective disclosure section 6254.5 prohibits. The agency’s own characterization of its intent is not dispositive, just as it is not dispositive under the law of privilege.


So the fact that the court saw fit to warn public agencies in general not to abuse their decision is an acknowledgement at least that public agencies abuse every possible loophole in the CPRA that they can find or even imagine that they found, but really, given their abuse-prone nature, the chances that they’re going to listen to this kind of abstract warning is very low.

Enter State Senator Bob Wieckowski and his nifty little project SB-1244, which would amend the CPRA to close this loophole opened by the Supreme Court’s decision. The main effect that the bill would have is to replace the word “discloses” in Section 6254.5 with the phrase “discloses, intentionally or inadvertently”:

Notwithstanding any other law, if a state or local agency discloses discloses, intentionally or inadvertently, a public record that is otherwise exempt from this chapter, to a member of the public, this disclosure shall constitute a waiver of the exemptions specified in Section 6254 or 6254.7, or other similar provisions of law.

This would certainly be a positive change, and we have certainly seen that business improvement districts in California can organize and defeat positive changes to the CPRA. So if it seems right to you, you can find your state legislators and tell them that you support SB-1244.