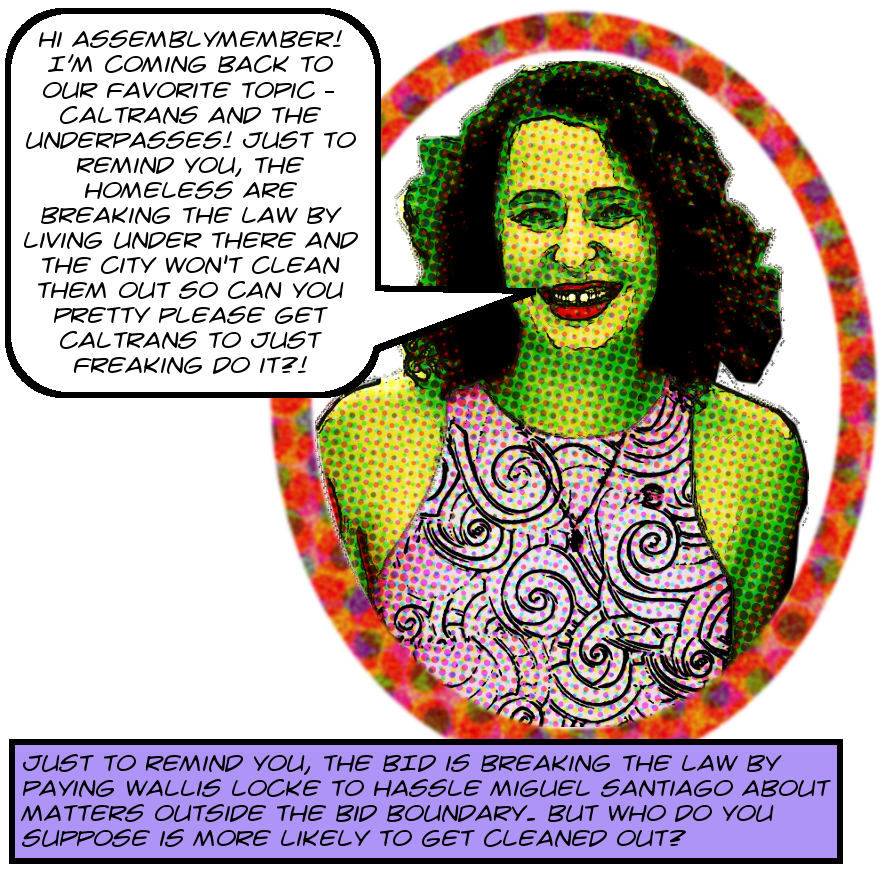 Although I suppose it’s not surprising that Miguel Santiago would be involved in such a scheme, given his demonstrated proclivity for selling the best interests of the people of California down the river just cause some BIDs asked him to. As I’ve said many times, I wasn’t cynical at all before I started learning about BIDs, but the BIDdies have made me so. Turn the page, if you will, for as much of the chronology as I have, links to the emails, and a few select transcriptions.

The record, although not the story, begins with a February 6, 2018 email from BID staffie Wallis Locke to Santiago minion Jackie Koenig:

We’re submitting a letter to City Council asking them to design and implement a regular cleanup schedule for underpasses in and around Downtown Los Angeles. As part of that ask, we’re urging them coordinate with the State Government and Caltrans – here’s a copy of our letter just in case that request finds its way to you.

It’s pretty straightforward, but let me know if you have any questions. Hope all is well!

Unfortunately, for whatever reason, the BID didn’t supply a copy of this letter. As you can see, though, as early as February 2018 the South Park BID was paying Wallis Locke to lobby the City of Los Angeles over an issue taking place outside the district, which is illegal. Jackie Koenig replied, adding more of her fellow staffers to the list of recipients.

And subsequently Wallis Locke sent these additional Santiago staffies their own version of the email, including some interesting new information. To wit, that not only was the BID at that point lobbying City Council directly (and illegally) to get homeless people “cleaned up” out of the underpasses, but that the BID was also rallying the troops directly (and illegally) to write their own letters demanding action:

I sent this up to Jackie a minute ago – the BID is requesting that City Council design and implement a regular cleanup schedule for underpasses in and around Downtown Los Angeles. As part of that ask, we’re urging them coordinate with the State Government and Caltrans and I just didn’t want her to be surprised if this makes its way up to you.

We’re currently building a coalition of people to submit letters of their own. David and I talked last week, and I’m attaching the letter here in case you’d like to share it as a template with any other constituents who call about this.

And for whatever reason, either because the BIDdies let the matter slide or because Miguel Santiago’s office forgot about it or some other random reason that we’re never going to understand, there the matter stood until eight months later, when Locke sent this October 18, 2018 email to Mark Gonzalez and Lizeth Zardeneta, which, by the way, was sent only two weeks before board members Bob Buente and Paul Keller had their embarrassing little freak-out about the underpasses right in the middle of their board meeting:2
Date: Thu, 18 Oct 2018 13:51:44 -0700
Subject: Re: DTLA Underpasses
From: Wallis Locke <wallis@southpark.la>
To: “Gonzalez, Mark” <Mark.Gonzalez@asm.ca.gov>
CC: “Zardeneta, Lizeth” <Lizeth.Zardeneta@asm.ca.gov>,Ellen Riotto <ellen@southpark.la>

I’m coming back to our favorite topic – Caltrans and the underpasses! The City has put together a task force to deal with their portions of the underpasses, but they’re still not looking very good.

Ellen saw the member recently at a CCA event, and they had a brief conversation about working something out with Caltrans to make sure the state property is cleaned regularly. At one point before I started with the BID we talked about the highway beautification act as a possible angle for doing so. I never found much there, but we would really appreciate your help finding a solution that’s more long term than routinely asking you to tackle this as casework.

I’m adding Ellen in and she can give more details about her conversation with the member. Thanks for your continued help with this, we really appreciate it!

And then a few minutes later BID Zeck Dreck Ellen Riotto weighs in with this little missive, specially interesting because it shows that she was talking up the issue with Santiago at a Central City Association meeting. Which is yet another example of the downright sinister kind of access to power that Carol Schatz’s nightmare horror-show conspiracy provides those who need such access.

BIDs and other suckerfish-to-the-powerful send their reps to hobnob with the politicos and propose bad BIDness. Then the politicos are all like “yeah, sure,” cause they’re softened up by being in the presence of zillions of dollars of potential campaign contributions. And those words are the suckerfish’s clue to get in touch with the staff and be all like “I proposed evil plan X to your boss, who said ‘yeah, sure.'” And that’s code for “git r done!”3 Oh yeah! The transcription:4
Date: Thu, 18 Oct 2018 14:11:37 -0700
Subject: Re: DTLA Underpasses
From: Ellen Riotto <ellen@southpark.la>
To: “Gonzalez, Mark” <Mark.Gonzalez@asm.ca.gov>
CC: “Zardeneta, Lizeth” <Lizeth.Zardeneta@asm.ca.gov>, Wallis Locke <wallis@southpark.la>

Thanks for kicking this off again, Wallis.

Mark, as Wallis mentioned, I brought this up at a recent CCA event and the Assemblymember expressed openness to working together to find some long-term solutions for ensuring that our underpasses (the main entry-points to our vibrant district) are clean and safe.

I want to share recent photos of the 110 at James M Wood and the 10 at Olive so you have a visual on what we’re talking about.

As you know, this task extends across many jurisdictions, and we need the guidance and support from your office to coordinate the many layers. Do you have some time the week of 10/29 to discuss?

And that’s the story, at least as I have it so far. Sure, there’s not much of a narrative arc, but then that’s how the story of political power and its victims in Los Angeles goes. No resolution, just an interminable sequence of horrifying little episodes reshuffled with new characters but the same plot, like some kind of satanic Oulipian theatrical spectacle. This is one of them.

Image of Wallis Locke is ©2018 MichaelKohlhaas.Org and is a transformative refiddling of this particular public record.

I will not advocate nor become a member of any party or organization, political or otherwise, that advocates the overthrow of the Government of the United States or of the State of California by force or violence or other unlawful means.”