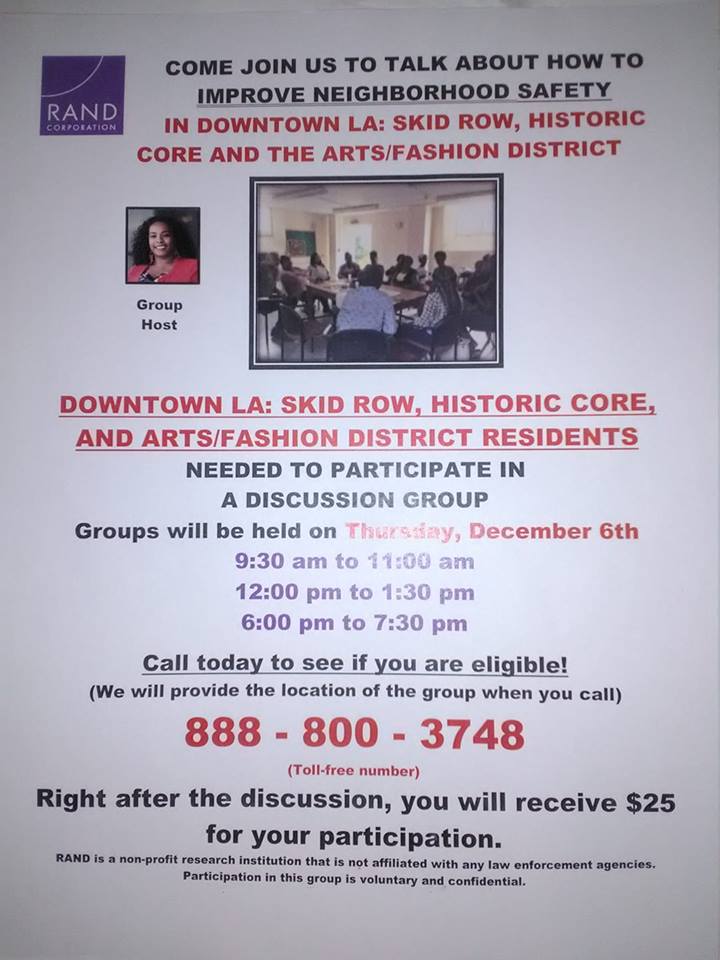 The flyer you’re looking at was posted around Downtown Los Angeles recently, seeking participants in discussion groups about “neighborhood safety,” to be paid $25 for 90 minutes of their time. As you can see at the bottom, the moving force behind this was the RAND corporation, a Santa Monica based think tank that has been providing theory-driven rationalizations for all manner of murderous government policies since 1948.

Now, I don’t know what kind of information RAND is looking for here or what they’re planning to use it for, although the multiple layers of deception embedded in the poster itself1 make it hard to believe that they’re working on anything life-affirming. I do know that RAND has a history with business improvement districts in Los Angeles.

Without evidence to the contrary it’s likely that, whatever else the information they’re gathering might be used for, RAND is certainly going to use it for this kind of thing. Or, once published, it will be used for this even if not by RAND. This has happened before. Just for instance, in 2009 RAND released a massive report on Los Angeles BIDs and public safety. Although the results of this study were ambiguous, nevertheless it has been taken up by both BIDs and by governments as weighty evidence in favor of the theory that BIDs reduce crime.

So much so, in fact, that it’s actually cited in the Property and Business Improvement District Act of 1994 as one of the reasons that the State Legislature promotes the formation of business improvement districts, at §36601(e)(1):

Tangentially, this report is surprisingly honest in a weirdly Orwellian sense about what BIDs are up to, much more so than the BIDs themselves ever are. For instance, read this selection,2 wherein the authors “… describe the BIDs in terms of their public safety (or social control), beautification (or broken windows), and marketing (or place promotion).”

Just try to get a BID ever to admit that their public safety programs are social control programs or that their beautification programs are tied in to the infamous broken windows theory. The report does not, however, go so far as to make the connection between so-called beautification and social control, seen e.g. in the love of BIDs for pressure washing sidewalks which, although nominally a cleaning process, also has the effect of relocating homeless people.

In any case, they must really have something to hide, otherwise why would the poster be so utterly deceptive? Just for instance, see the photograph of the “group host.” She’s African American, but they don’t have to say so this way. Also they don’t have to tell her name.

Additionally, see the statement that RAND is “a non-profit research institution that is not affiliated with any law enforcement agencies.” This is actually just a lie. See RAND’s own list of their funding sources. One of them is the Department of Justice, which runs the FBI, which is certainly a law enforcement agency. Not to mention that the vast majority of their funding comes from the U.S. Military and, more importantly, the Department of Homeland Security.

DHS, of course, oversees ICE. ICE is certainly a law enforcement agency or, if not due to some technicality, is as good as one in cities as full of undocumented aliens as Los Angeles. It’s not only a lie for RAND to claim that they’re not affiliated with law enforcement agencies, it’s a pernicious lie.

And the claim that they’re a non-profit research institution sounds pretty innocuous when compared to their actual record, which involves torture during the Vietnam war, not to mention at Guantanamo Bay and in Afghanistan, batshit crazy theorizing about winnable nuclear wars, And so on. The fact that they’re not making a profit off this kind of stuff doesn’t seem that relevant to anything, does it?

So yeah, what is the RAND Corporation holding these discussion groups for? We still don’t know, although eventually we’ll find out. Sadly the RAND Corporation is not subject to the California Public Records Act, nor to the federal Freedom of Information Act. But in order to carry out their nefarious purposes in Los Angeles they must intersect and communicate with the LAPD, with the City Council, with BIDs. So yeah, eventually we’ll find out. Meanwhile, it’s probably better to stay away from this nonsense just in case.