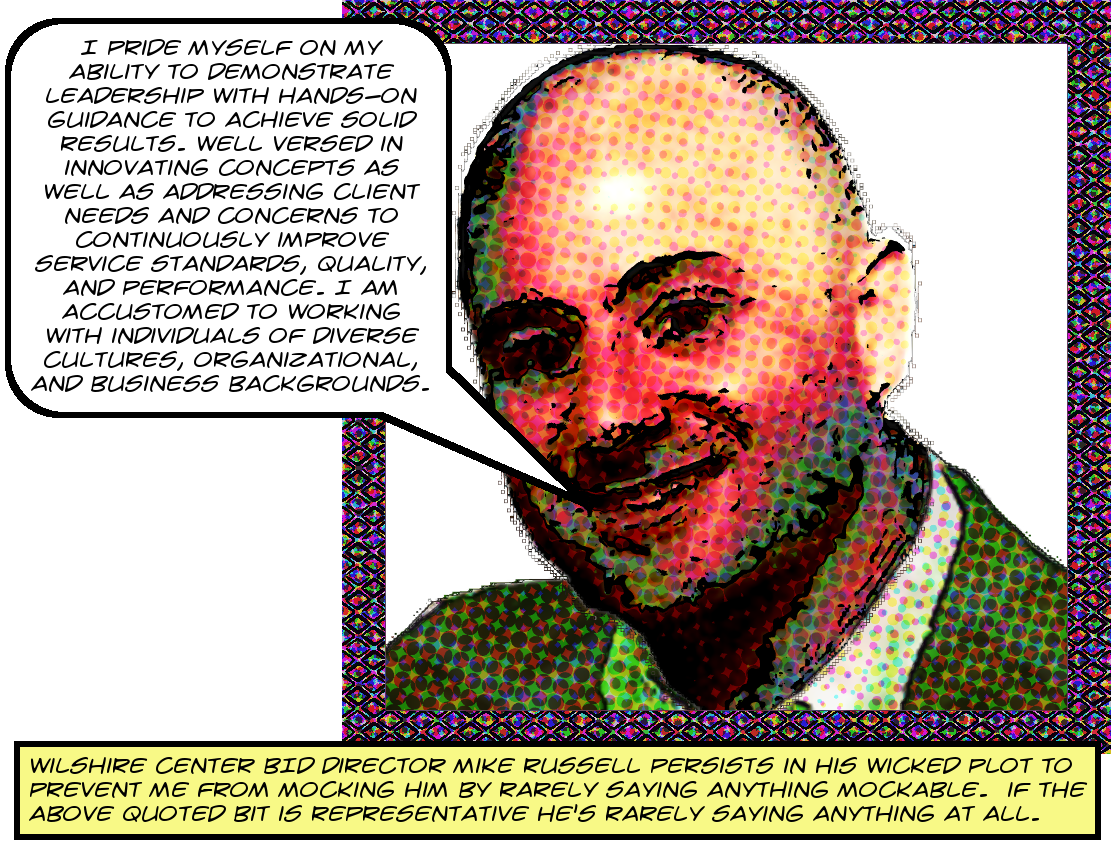 It’s been a while since I’ve asked for records from the Wilshire Center BID, in fact we haven’t heard from them since the whole sad clown Mike Hakim episode last summer. But just the other day I got about 200 new emails from the always cooperative Mr. Mike Russell, their doughty zeck dreck, and as always you can peruse them at your leisure and pleasure here on Archive.Org. And there are no blockbusters in there, but you might enjoy looking through the usual rattle and hum of the daily BIDness.

However, there is one really interesting, at least from a technical BIDological point of view, item, and that is this October 2, 2018 email from Rick Scott of the City Clerk’s BID division to Jose Flores, his subordinate, CCed to Mr. Mike Russell and, in a particularly cruel touch of bureaucratic passive aggression, every last one of Jose Flores’s supervisors. It seems that some internet random known as nezabudka1937@gmail.com fired off an angry little missive to the Clerk’s BID division at Clerk.NBID@lacity.org complaining about homelessness and urban decay in K-Town (of course there’s a transcription of everything after the break).

Jose Flores, who’s apparently tasked with sifting through the chaff,1 forwarded it to Rick Scott, and Rick Scott was all like, Jose! Send it to Mr. Mike Russell next time! Why? Here’s where things get strange. Thus all-caps-icalized Rick Scott:

With ANY stakeholder issue the BID is always the first entity they should contact. If their issue isn’t resolved after a reasonable time we will contact the BID to try to resolve it. The BIDs don’t work for us. They are paid to address stakeholders’ concerns.

The really unexpected thing here is Rick Scott’s statement that “If their issue isn’t resolved after a reasonable time we will contact the BID to try to resolve it.” I really don’t think that this is true either, but I wonder why Rick Scott thinks it’s true? Just for instance, as you may well be aware, at one time I tried to get the Clerk’s office to force BIDs to comply with the CPRA but the Clerk herself, Ms. Holly Wolcott, told me in no uncertain terms that the City had no power over the BIDs.

She refused to intervene, and that plus the fact that the damn BIDs refuse to follow the damn law is why I have had to file about nine separate lawsuits against BIDs to try to get records out of them, and there are more lawsuits on the horizon unless some BIDs get more serious about their statutorily mandated duties. This is really inefficient. The BIDs end up spending tens or even hundreds of thousands of dollars, torn involuntarily from the wallets of property owners, on paying off lawyers, both theirs and mine.

It takes a huge amount of my time as well and slows down my research and other work by essentially stalling access to records while the suits play out. It’s a huge waste, and the City could end it tomorrow just by “contact[ing] the BID to try to resolve it.” Instead of doing that, though, they’re rewriting their contracts with the BIDs to obscure their own responsibility and otherwise enabling and encouraging the BIDs to defy the law in various ways.

And now Rick Scott is claiming that the City will intervene on behalf of anyone who writes in to gripe that the BID isn’t cleaning up the homeless with sufficient brutality? Without even checking that the guy pays assessments into the BID? I mean, he’s probably wrong, but why does he think that? If I email some BID and ask them to beat up even more homeless people and then they won’t, will the City intervene then? As with many such unsolved problems of BIDdology, the proper answer is probably “who knows?” But maybe someday we’ll learn. Meanwhile, here’s the whole email chain, rearranged in chronological order:

Rick,
This was sent into the NBID email address.

I forwarded this to the BID director Mike Russell.

Please reply to the email and give them BID’s phone number. Thanks.

With ANY stakeholder issue the BID is always the first entity they should contact. If their issue isn’t resolved after a reasonable time we will contact the BID to try to resolve it. The BIDs don’t work for us. They are paid to address stakeholders’ concerns.

Thanks I appreciate it!

Image of Mike Russell is ©2018 MichaelKohlhaas.Org and we zooped it up outta Mr. Mike’s LinkedIn pix! Don’t forget to buy the damn Mike Russell mug! Makes a great holiday gift for your favorite BIDologist!