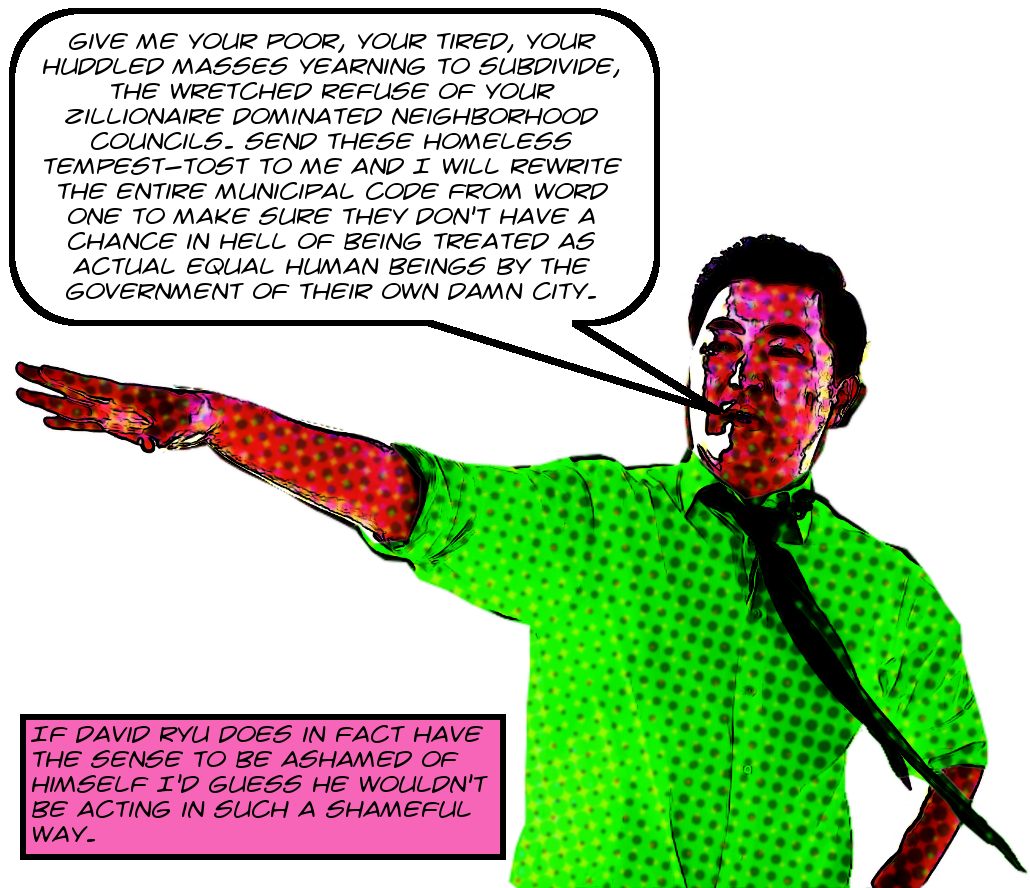 After yesterday’s debacle at the Budget and Finance committee where Jose Huizar and David Ryu’s turd1 of a motion funding an online voting pilot in neighborhood council elections next year passed even though all four members present said explicitly and at great length that they hated it2 I guess I wasn’t expecting any kind of sanity to prevail in the fraught arena of neighborhood council politics.

And this morning’s crop of email much more than confirmed that dark prediction. Included there in the usual packet of motions filed in Council, there amongst the usual inconsequential nonsense like attempts to outlaw parking RVs on another two blocks in Venice and whatnot appeared this tyrannical slab of class warfare by formerly sane3 councilmember David Ryu.

This motion is memorialized in CF 12-1681-S3 if you want to follow it, and you should.There’s a complete transcription after the break, and here are a few of the more egregious proposals:

✰ Subdivision elections would be held only every four years starting in 2022.

✰ There would only be three subdivision elections allowed in each cycle.

✰ If more than three apply in a given election year only the three largest by population would have elections. This means that as long as there are three larger every four years, some neighborhoods could never hold an election whether or not they met all the other criteria.

✰ Required mediation with existing neighborhood councils before a subdivision election could proceed.

Oh, and for the record, the reason David Ryu thinks we need this putatively reformist crapola is because the five subdivision elections already held ” have generated unnecessary discord in neighborhoods.” The fact that he thinks this is a bad thing is very revealing. What are we, children who must be kept calm by our parents? Is it ever a bad time to quote Fredrick Douglass?4

It’s no coincidence that any one of the proposals would have killed the Skid Row Neighborhood Council Subdivision in its cradle before it even got to an election. Of course the city’s zillionaires would have greatly preferred this because it would have prevented their exposure as evil puppetmasters. Almost every law we have has been adjusted, tweaked, and refined to give zillionaires full control over everyone else without having to expose themselves.

The SRNC debacle was a rare exception, not in the sense that the zillionaires lost the battle. At least for now they won it. But because they had to expose the ways in which they wield their power and win every battle. If this motion Ryu’s proposing takes effect that’ll never happen again.5 Turn the page for a transcription.

The first round of subdivisions occurred in 2017. A second round recently finished in 2018. Over these two rounds of subdivisions, a total of five subdivision elections were held with three affirmative votes for subdivision and two in the negative. This process has demonstrated some clear issues in the subdivision process as currently enacted that have generated unnecessary discord in neighborhoods and used up more city staff time than is beneficial for the overall Neighborhood Council system.

The Board of Neighborhood Commissioners reviewed the subdivision process after the elections in 2017 and developed a series of recommendations for improvements in the process, encapsulated in their letter set out in Council File 12-1681-S1.

I THEREFORE MOVE that the Department of Neighborhood Empowerment be
INSTRUCTED to:

• Hold subdivision elections no more frequently than once every four years.

• Hold the next subdivision elections in 2022 or later, to give time for the new subdivided Neighborhood Councils to become established and provide the department time to draft and adopt these regulations and other ordinance changes spelled out in Council File 12- 1681-S1.

• Hold no more than three subdivision elections per subdivision election cycle. If more
than three petitions are submitted, the three fully completed petitions with the largest number of residents, based on the latest data available from the American Community Survey of the US Census or related government data set if the American Community Survey is no longer available, shall be accepted.

• Not accept subdivision applications that encompass less than 10,000 residents, based on the latest data available from the American Community Survey of the US Census.

• Require subdivision petitions to contain at least 500 signatures from stakeholders of the proposed Neighborhood Council boundaries and that no more than 10% of signatures gathered can come from any one building or address.

• Publish a subdivision policy encapsulating these and any other relevant requirements.

Image of David Freaking Ryu is ©2018 MichaelKohlhaas.Org and is more or less somehow kinda sorta related to this David Ryu right here.