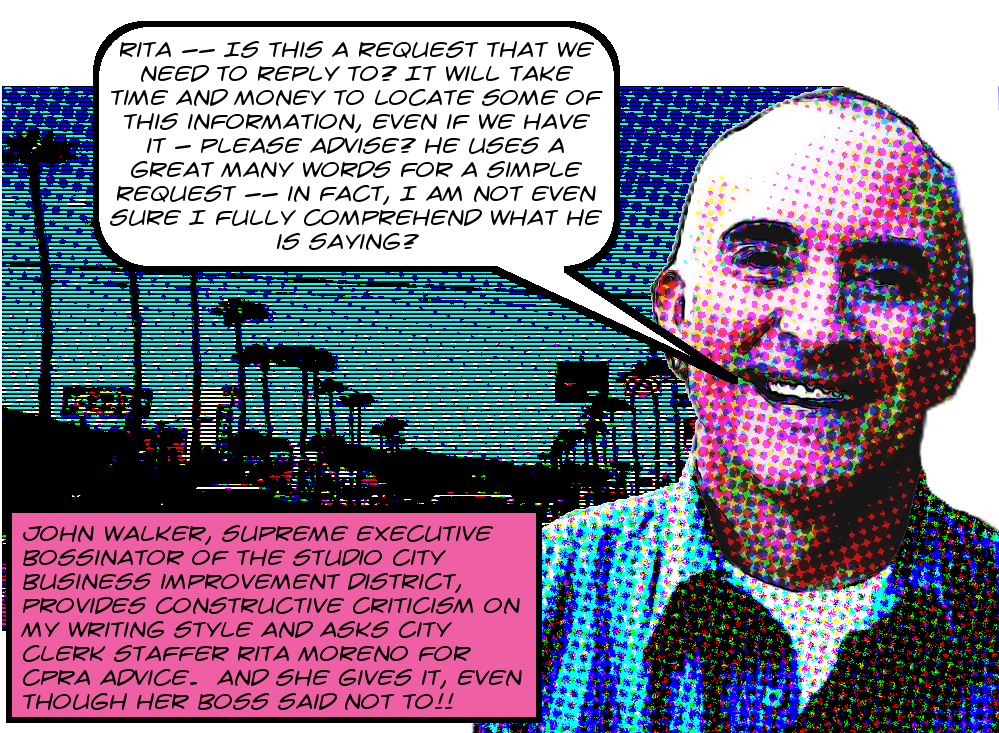 In the great and good1 City of Los Angeles, business improvement districts are overseen by the City Clerk‘s office. They have a whole subsection of their website about BIDs; how to form one, what they are, and so on. And not only that, but as part of their oversight process, each BID signs a contract with the City Clerk’s office. These are all about the same as one another, and if you want to look at one, here’s a link to the Studio City BID’s contract.2

And, like every one of these contracts between the City and its BIDs, this one contains, in Section 16.3, the following fairly unequivocal requirement: “… Corporation and the Board of Directors are also subject to and must comply with the California Public Records Act.” Finally, buried deep down in this website, they have published a stunning little item called the Service Operations Summary, which purports to explain the City’s role in relation to its BIDs.

In particular, in Section 5, this document claims that:3 “THE [CLERK’S] OFFICE PROVIDES CONTINUOUS CONTRACT COMPLIANCE ASSISTANCE. Staff monitors the use of revenue in order to ensure that assessments paid by district members are used appropriately and in accordance with contractual, budgetary, statutory and City regulations and procedures.”

Now, it’s a tragic aspect of the CPRA that the only remedy for noncompliance that the legislature has seen fit to provide is a lawsuit. However, it seems at least plausible from the foregoing that if a BID is not complying with the CPRA, it’s the duty of the office of the Clerk to ensure that they do comply with it. Acting on this theory, and hoping to avoid a bunch of damn lawsuits,4 once upon a time in 2016 I tried to get Ms. Holly Wolcott to mediate between me and uppity non-CPRA-compliant BIDs.

But she, almost certainly acting on the advice of rogue deputy city attorney Michael Joseph Dundas, denied that the City had any power whatsoever to compel BIDs to comply with the law, despite what the above-quoted Service Operations Summary claimed. Despite the fact that the City has a contract with each BID and the contract requires CPRA compliance. And she didn’t just deny it, she denied it vehemently:, stating in an email to me5 that:“…the Clerk’s office [does not] have the authority to control/direct the records management practices of the various BIDs which are entities wholly separate from the City.”

Anyway, a couple weeks ago, I sent a CPRA request to the Studio City BID, asking for a bunch of stuff. When the material showed up yesterday, I found an exchange between John Walker and Rita Moreno, a City Clerk staffer in charge of many aspects of BIDs, discussing my request. Basically he was all like do we have to do it because expensive and time-consuming. And she was all like … well, turn the page to read all the emails and see exactly what she was all like, but suffice it to say she was all like DIRECTING him to do it because of the law. That is, she was doing precisely what her boss, the famous Ms. Holly Wolcott, said that the City would never do and didn’t even have the power to do.

The story begins with this March 30 CPRA request to the SCBID for a bunch of emails and a few other items.6 It was a little after 8 p.m. when I asked them for:

… all emails in the possession of anyone on the SCBID BID staff or Board that are TO/FROM/CC/BCC anyone at the listed domains from January 1, 2017 through date of compliance:

Also, I need to see the contract between the SCBID and the BID consultant, if there was one, that you all used for your most recent BID renewal. If you’ve already signed a contract for your upcoming renewal in 2020 I’d like to see that contract as well.

I need to see these emails and their attachments in their native formats as required by CPRA at section 6253.9(a). For emails this means EML, MBOX, or MSG. If you provide emails in one of these formats the attachments will automatically be included in native format as well.

Finally, I would like to see agendas and minutes of the Board and all committees for as far back as you hold them in electronic form. I need to see these in native format as well.

Thanks so much for your help and I look forward to receiving your response within the statutorily mandated time-frame.

The very next day, in fact only about 18 hours later, John Walker fired off this email to Rita Moreno, which said:

Is this a request that we need to reply to?

It will take time and money to locate some of this information, even if we have it – please advise?

I know it’s time consuming, but you do need to respond within 10 days. Your response acknowledges receipt and lets the requester know which documents you do or do not have and whether you need additional time to compile them.

The easiest way to look for emails with the listed domains (1-16), is to simply type “hollywoodbid.org” in the search field to see what comes up within the time period requested. If none come up, then there are no responsive records for that particular subject and you move on.

If you are on contract with the SCBID to administer the BID, you can provide the contract.

For the emails between staff and the BID board, most of them are likely able to be disclosed, unless they contain personnel related and legal matters. You can print them as PDF documents along with any attachments and that preserves the original email, unless you use an email program that allows you to save or store the emails in the format he is requesting. You are only required to provide the records in their original format (no manipulation of content).

If your agendas and minutes are posted on your website, you can provide a link to the site where they can be found. If you have any that are not posted, but have an electronic copy, you can print them as PDFs and provide them. It’s a good idea to keep them posted online as archives for anyone wishing to see them.

And John wrote back less than two hours later, with this friendly little missive:

I have already replied and acknowledged receipt. We are gathering all the info and have most of it with the exception of any emails from Board members (and I am inclined to think there are none save for the President. We are currently searching any and all email from other BIDS and will include those as well.

I have the Consultant contract – all the Agendas and Minutes – (he uses a great many words for a simple request) in fact, I am not even sure I fully comprehend what he is saying?

As you know, we do not have a (staff) and in fact, only have one person (other than myself) who works in the office but, we will do our best.

And John Walker has been nothing but helpful with respect to this matter. As I said, he provided me with significantly more than 5,000 emails and some useful other material as well. There’s no problem there. The problem is Rita Moreno’s casual directions to John Walker:

Does this sound like someone that “… [does not] have the authority to control/direct the records management practices of the various BIDs which are entities wholly separate from the City”? I submit that it does not. Either Holly Wolcott was lying, which is incredibly plausible, or Rita Moreno was being insubordinate, or both. We’ll probably never know which it is.8

Oh, here’s an interesting postscript. I sent John Walker another CPRA request the other day.9 He answered me, proposing to illegally charge me a bunch of money for the records. He CC-ed his answer to Rita Moreno, so in my response, which I also sent to Rita Moreno, after I explained to him at great length why he couldn’t charge me for staff time spent gathering the records, I said unto her:

Rita, I’m heartened to see that the Clerk’s office has decided that it does have some kind of a responsibility to advise BIDs on their duties under the CPRA. Is this a new general policy? If so, may I send you a list of noncompliant BIDs for you to advise?

No answer yet, friends!