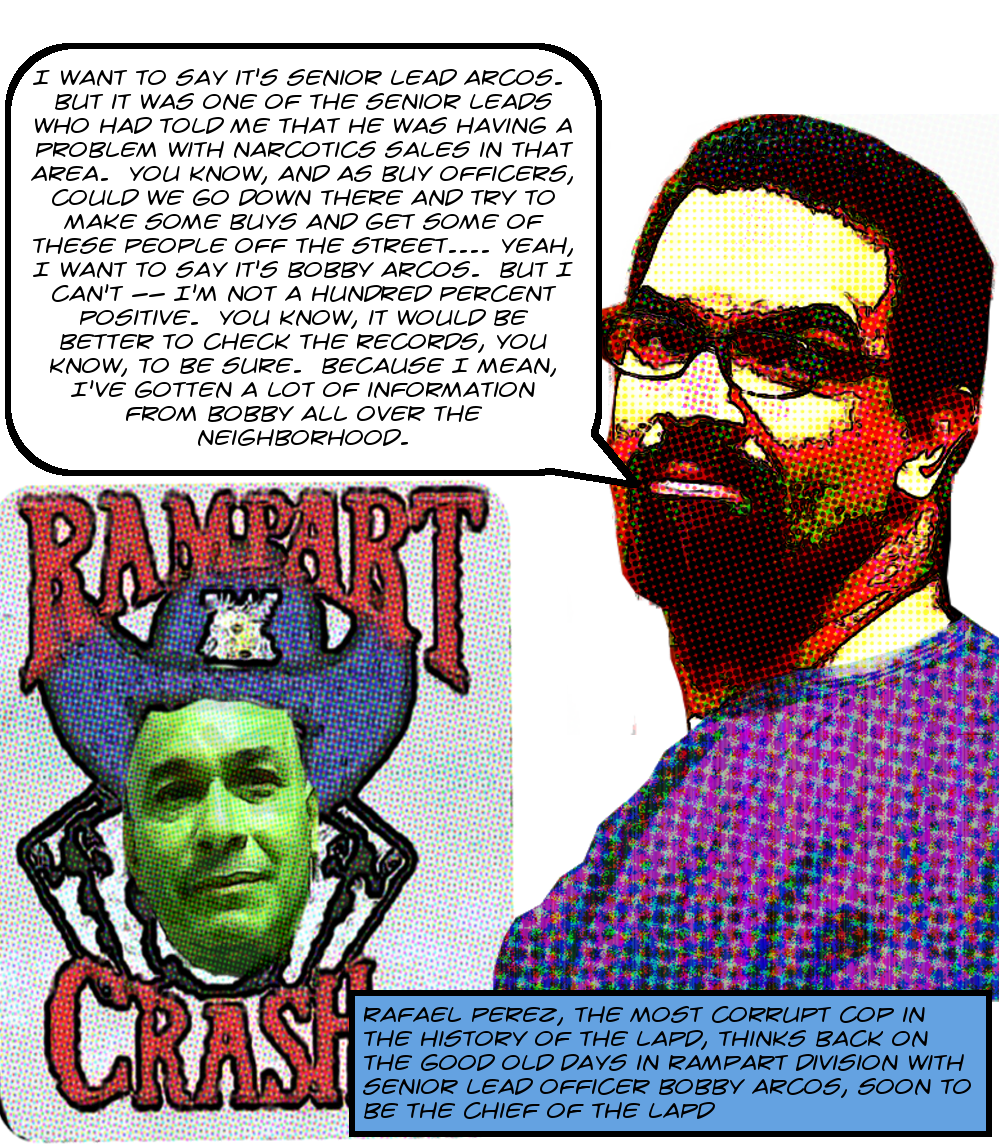 And if you know about all that stuff… well, maybe you still don’t know, because I didn’t, that many CRASH alums have moved on to bigger and better things in the LAPD. For instance, our old friend Peter Zarcone, late of Hollywood Division but now cracking skulls for the man out on 77th Street, was in CRASH. And not only him, but also Deputy Chief Robert “Bobby” Arcos, now running for Chief of the whole damn show, used to run with the CRASHies.

And it’s a legit question, really, how it was that he was a senior lead officer back in the day, and all his subordinates1 were out stealing cocaine and falsifying evidence and beating suspects within an inch of their lives and whatever else it was that they got up to out there in the Rampart Division, and he had no clue that any of this was going on? It kind of sheds a negative light on his leadership ability, does it not?2 Is this the guy we want running the LAPD?

And it’s not even like Bobby Arcos has left the bad old days behind. The inspiration for this post is an email I just received from the LAPD.3 It’s from long-time Zarcone wingman Alex Baez organizing a reunion of CRASH officers to be held in 2015 at the City Club of Los Angeles. Zarcone was invited, and Chief-to-be Arcos was invited as well.

The email is pretty amusing, what with the detailed dress code of the City Club that everyone’s going to have to adhere to, and there’s a transcription after the break as always. But what’s more interesting is why Bobby Arcos thought those bad old days in CRASH were something to get together with friends and drinks and reminisce about. It doesn’t sound much like he’s moved beyond, does it? If I were going to hire him as Chief, I’d want him to come totally clean about what happened back then, what he knew and when he knew it, and so on. And I’d want him to quit going to the damn reunions.

Transcription of the email under discussion

Hello All here are some tips for parking and attire for the City Club. See you tomorrow!

We’re so pleased you’ve decided to visit City Club Los Angeles. To help acclimate guests to our suggested attire, we offer the following helpful guidelines. Casual Attire Throughout the Club

Dressy jeans and business casual attire are welcome throughout our Club. Jackets and ties are optional for afternoon dining. Arbor Room – Upscale Dining

Ties are optional and jackets are required for daily dinners. Please refrain from wearing denim in the Arbor Room.

Thank you for using your best judgement to make sure you’ll be comfortable. We look forward to your visit.

Just a reminder regarding the April 24th. Please RSVP if you are attending so I can have an accurate head count (no offense Manny). Please come and help me spend Jorge V’s money.

Thus far we have confirmed:

I hope everyone is doing well. We have been trying to coordinate a reunion for the unit for some time now. Jorge Villegas has graciously rented a location with wonderful amenities. He is also celebrating his recent promotion. This gives us an opportunity to share some old stories in a great setting with our old partners and friends.

Thank you and we look forward to seeing everyone on the 24th.
Alex Baez