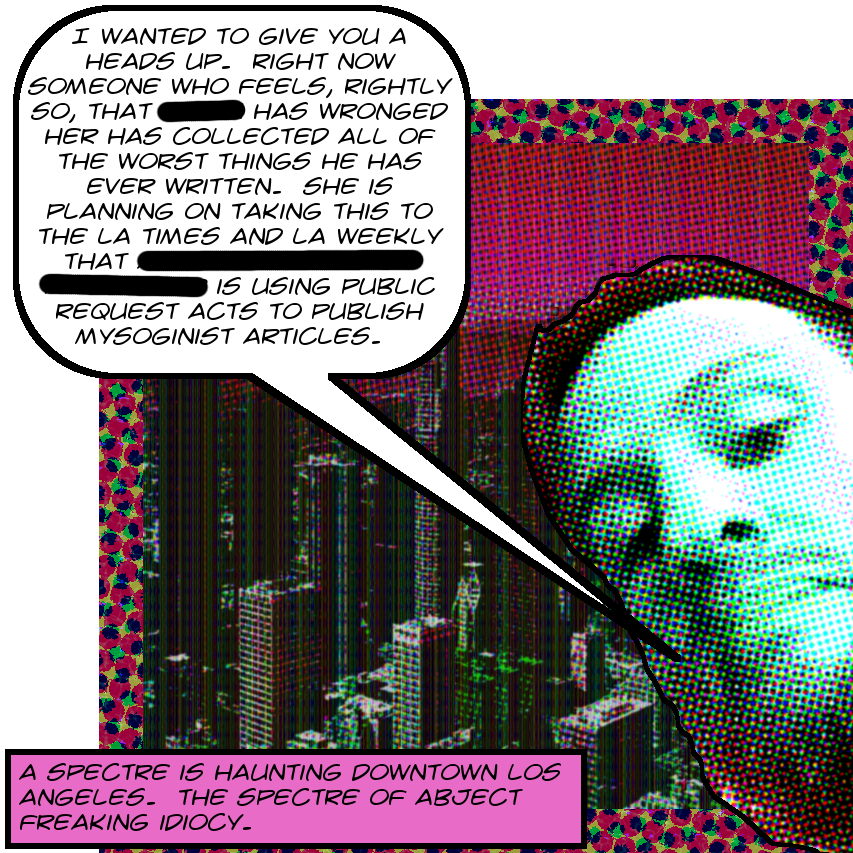 Recently I reported on the fact that idiosyncratically facial-haired DLANC douchebag-at-large, Joshua Albrektson, had threatened to expose my deepest darkest secrets to the world if I didn’t stop requesting documents via the California Public Records Act and writing about them on this blog. Well, the other day I obtained a few of the emails he sent in furtherance of this criminal conspiracy to repress me, and I thought I’d publish them here. For once I don’t have any snark to intersperse. The guy’s work is self-mocking. So turn the page for links and transcripts!

◉ October 7, 2017 Albrektson email — This one’s interesting because Joshua Albrektson explicitly identifies himself as a member of “the local neighborhood council.” It’s also interesting that it was written on October 7, that he identifies himself as “a DTLA resident,” and that, according to him, he moved out of Downtown sometime before July 7, 2017.

I don’t know if you know this, but ■■■■■■■■■■■ runs a website called michaelkohlhaas.org. He blogs under a pseudonym there and has being doing it for years. He has been using the public records act to obtain information from the city and the local business improvement districts and then writes articles, a lot of which are very misogynist, about what he finds. The City of Los Angeles literally has a person whose sole job is to respond to his requests and he has even gone as far as to ask for the pictures of the people who handle his request.

I suggest that you spend a lot of time looking at his website and read past articles. After the Skid Row Neighborhood Council elections people posted his article with a face crossed off on the door of one of my fellow neighborhood council people. Certain people are now scared to walk out of their office because of what he has written.

I wanted to give you a heads up. Right now someone who feels, rightly so, that ■■■■■■■■■■ has wronged her has collected all of the worst things he has ever written. She is planning on taking this to the LA Times and LA Weekly that ■■■■■■■■■■■■■■■■■■■■■■ is using public request acts to publish mysoginist articles.

◉ November 15, 2015 Albrektson email — This one’s interesting because, even as he’s nattering on about how I’m slandering and misogynising right and left, it’s OK with him if I do it to Patti Berman because he doesn’t like her. It seems that this isn’t even a matter of principle with him. Strange. Also, he refers to women as “females,” which is incredibly weird, and is just a teensy weensy bit mens-rightsy.

Hey ■■■■■■■■ (and ■■■■■■),
Listen, I am a very nice person, but I do not appreciate slanderous stuff being written about me by ■■■■■■■ on MichaelKoolhaus.org. And I know a lot of the women who you have written misogynist things about hate you for that reason. As I am sure you are about to read in Town Square, one of them has been collecting these articles and is considering sending them to every female who you are associated with. The other people in ■■■■■■■■■■, your ■■■■■■■■, the ■■■■■■■■■■■■. I just wanted to give you a heads up that it is in your own best interest and the interest of ■■■■■■■■■■■■■■■■■ that it doesn’t get out that you have written and continue to write all of these articles. For example:

”
THE SHEER OVERWHELMING INCOMPETENCE AND HABITUAL, ALMOST MANNERED, INACTION OF DLANC PRESIDENT FOR LIFE PATRICIA X. BERMAN ”
I actually don’t like Patty, so I appreciated that article.

◉ November 19, 2017 Albrektson email — This one’s interesting because he CC-ed it to Patti Berman, Rena Leddy, Estela Lopez, and Blair Besten. It’s also interesting because he doesn’t seem sure of how to spell the names of his putatively close friends Estela Lopez and Blair Besten. Anyway, out of charity I’m going to assume that the four of them weren’t consulted about this plan before having their email addresses slapped on here by Joshua Albrektson. At least three of the four are obviously smart enough to realize that this kind of thing can’t end well. And Blair Besten? Well, as I said, charity.

He runs a website called MichaelKohlhaas.org. He does public request acts of the business improvement districts and from what he learns, he write misogynist essays about the things he finds. I strongly encourage you guys to peruse the essays to see what he has written. I don’t know if he treats women he works with like this, but he has slandered a lot of people in his time. I have attached their e-mails if you have any questions.

This is Estella Lopez and the 32 articles he has written about her. She runs the Central City East BID.

This is Patti Berman. She is the president of the local neighborhood council and doesn’t deserve to be called “The sheer overwhelming incompetence and habitual, almost mannered, inaction of DLANC President for life Patricia X. Berman.” 16 articles about her:

This is Blair Beston, who runs the DTLA historic core BID, who he has written 25 articles about:
https://michaelkohlhaas.org/tag/blair-besten/

Image of Josh being Josh is ©2017 MichaelKohlhaas.Org. It’s slapped up out of a screenshot from this mutated fruit fly of a video and this lovely free flower of an image of Downtown Los Angeles.