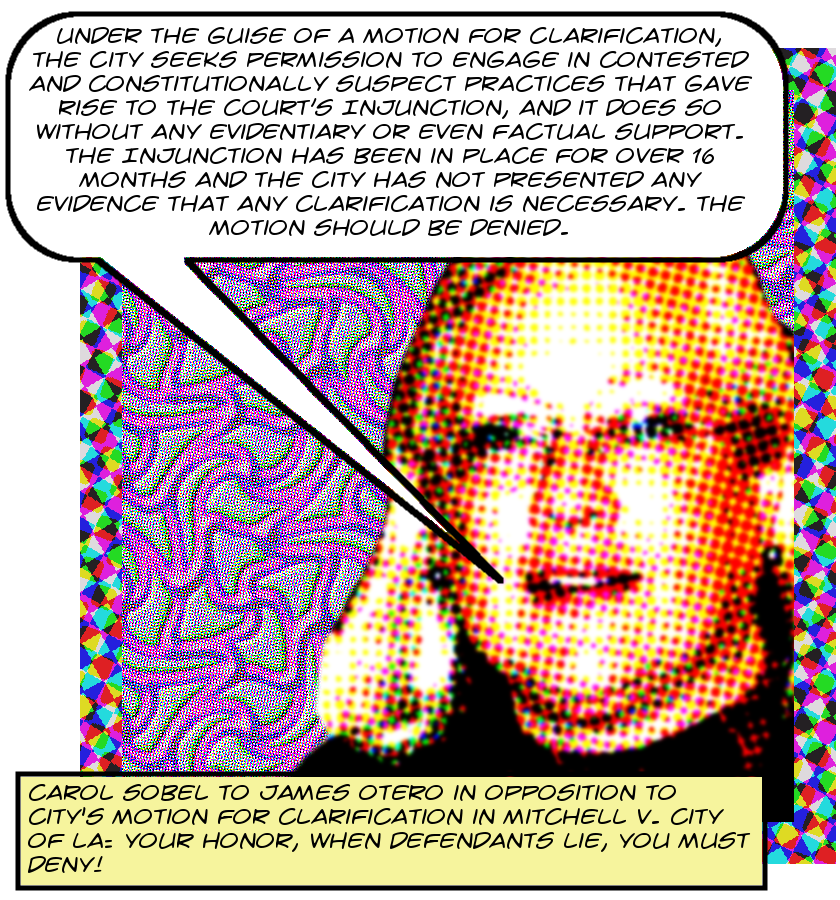 See Gale Holland’s excellent story in the Times on Mitchell v. LA as well as our other stories on the subject for the background to this post. See here to download most of the papers filed in the case.

It’s been over a year since anything tangible happened in Mitchell v. City of LA, which is the most recent lawsuit against the City of Los Angeles challenging the City’s abhorrent enforcement of the abhorrent LAMC 56.11 as an abhorrent justification for the illegal and immoral confiscation of the personal property of homeless people in Los Angeles. Here’s a brief timeline of what’s been going on:

According to the American Bar Association Journal,

The idea behind community caretaking is that police do not always function as law enforcement officials investigating and ferreting out wrongdoing, but sometimes may act as community caretakers designed to prevent harm in emergency situations.

When they’re functioning in that role, the theory goes, they can seize cars without due process, or search houses without a warrant, and so on, as long as they’re “caring for the community” rather than investigating. Thus the community caretaking function justifies some specific exceptions to the Fourth Amendment prohibition on warrantless searches and seizures of property.

And I’m sure you can imagine just what kinds of mischief the City of Los Angeles is capable of getting up to with a tool like that. In particular they’re arguing that they ought to be able to confiscate people’s property when they’re arrested even if the arrestee has someone at the scene who can take custody of the property. The City says yes, sane people say no.

This matter is scheduled for a hearing at 10 a.m. on Monday, September 11, in Otero’s Courtroom 10C in the First Street Federal Courthouse. Anyway, turn the page for some excerpts from the filing which explain things better than I’m capable of doing.

In a motion brought pursuant to Federal Rules of Civil Procedure 60(a), the City seeks “clarification” of the Court’s April 13, 2016 injunction. Specifically, the City seeks 1) ratification of a newly-enacted definition of “bulky items” that would allow the City to arbitrarily throw away individuals’ belongings; and 2) under the guise of the City’s “community caretaking function,” blanket permission to seize and search a homeless person’s belongings, any time they are arrested. The Court’s injunction is clear on these points. Clarification is not necessary, and modification of the injunction is neither appropriately before the Court, nor consistent with the Constitutional principles underpinning the Court’s injunction.
…
The only issues that remain before the Court are those raised in Sections 2 and 4 of the Motion: first, whether an expanded definition of bulky items may be removed without notice or warning, an issue not appropriately before this Court in the City’s Motion for Clarification; and second, whether the community caretaking exception allows the City to remove a person’s property during an arrest even when another person is standing by whom the owner is willing to entrust with the property. As Plaintiffs explain below, the community caretaking exception to the warrant requirement does not apply when another person is present to take custody of the property.
…
Defendant’s fourth point contends clarification is necessary to address the definition of a “bulky item” that the City may remove and summarily destroy without pre- or post-deprivation notice. See Motion at 9-10. Since the entry of the preliminary injunction six years ago in Lavan v. City of Los Angeles, 797 F.Supp.2d 1005 (C.D. Cal. 2011), the City has been operating under the same definition of “bulky items” set forth in Lavan. Defendant’s Motion is devoid of any facts to support a need to “clarify” the “bulky items” definition used for this Injunction. The City has not shown why the definition of “bulky items” by which it has been bound for the past 6 years should be changed. The fact that the City enacted a new law with a extraordinarily broad definition of “bulky items” does not establish the need for clarification. Nor have Defendants set forth any facts or scenarios that would create a case or controversy for this Court to adjudicate.

The recent amendments to § 56.11 raise serious questions about its constitutionality that should be addressed on the merits and concrete facts, not speculation and hypotheticals. For example, the definition of “bulky items” under the revised ordinance excludes “operable” bicycles, and wheelchairs and other mobility assistive devices. § 56.11.2(c). As amended, this gives the City authority to seize and instantly destroy “inoperable” bicycles, wheelchairs and other assistive mobility items without notice. “Inoperable” items may be repairable, yet the City would seize and irrevocably demolish them. These items are essential for many individuals who are homeless and do not own a car or have mobility challenges. Indisputably, they have substantial due process interests in these items. The City may not now remove such items without notice. No facts show a need to change.
…
The City also seeks a modification of the Court’s injunction, to allow it to seize arrestees’ property when they are detained, which they contend is consistent with the “community caretaking” exception to the Fourth Amendment. Plaintiffs do not argue that the City must leave an arrestee’s property that would “otherwise . . . be left on the street unguarded.” Motion at pg. 6, Ln. 14, or that there are not instances in which “unattended property could be lost or damaged, which would cause more harm to the homeless arrestee than having the property confiscated and stored until he or she is released.” Motion at pg. 6, Ln. 17. Nor do Plaintiffs dispute the general principle that, under the Community Caretaking exception, there are situations that could arise that would justify the City seizing and storing an individual’s belongings when an individual is taken into custody and there is no one available to take custody of their belongings. However, the broad exception advocated by the City is not justified, either by the (lack of) evidence put forth by the City or by the constitutional principles that give rise to the narrow application of the Community Caretaking Exception to the warrant requirement of the Fourth Amendment.
…
Plaintiffs put forth significant evidence in support of their motion for a Preliminary Injunction that the City has seized the property of arrestees, not pursuant to a “a valid caretaking purpose,” but instead, to illegally search and subsequently destroy homeless individuals’ belongings. This case arises from the City’s practice of using arrests for “minor quality of life offenses,” “as a pretext to seize and confiscate Plaintiffs’ property.” Injunction at 1. Plaintiffs alleged and put forth evidence to demonstrate that the seizure and destruction of property violates the “well delineated” principles that Courts have established to ensure that the exception is applied narrowly and only on a case-by-case basis.
…
The Community Caretaking exception to the warrant requirement is a fact-specific doctrine that cannot be used to justify the full-scale search and seizure of homeless people’s belongings any time they are arrested. In this case, Plaintiffs allege that the LAPD is using the arrests of individuals as a way to seize, search, and ultimately destroy homeless individuals’ belongings. The City had the opportunity to raise concerns about the community caretaking exception in its opposition to the injunction and it failed to do so. As a practical matter, Plaintiffs do not object to the application of the Community Caretaking exception where it is applied on a case-by-case basis, consistent with court rulings that have provided an appropriate framework for its application, including most importantly the seach storage of property, pursuant only to an established inventory procedure, and only where there is no one with whom the arrestee can leave their belongings. 6 See Cervantes, 703 F.3d at 1141-42; Casares, 533 F.3d at 1075; Miranda, 429 F.3d at 866; Brewster, 859 F.3d at 1196. But as in Mr. Roque’s case and Ms. Coleman’s case, where a third party is present who can safeguard an individual’s belongings, there is no constitutional basis for the seizure of an arrestee’s property. The Community Caretaking exception simply does not apply, and a modification of the injunction to allow such an application is not justified, nor allowed under the Fourth Amendment.
…
Under the guise of a Motion for Clarification, the City seeks permission to engage in contested and constitutionally suspect practices that gave rise to the Court’s Injunction, and it does so without any evidentiary or even factual support. The Injunction has been in place for over 16 months and the City has not presented any evidence that any clarification is necessary. The motion should be denied.

Cartoon image of Carol Sobel is ©2017 MichaelKohlhaas.Org. It’s a heavily modified transmogrification of this item here.