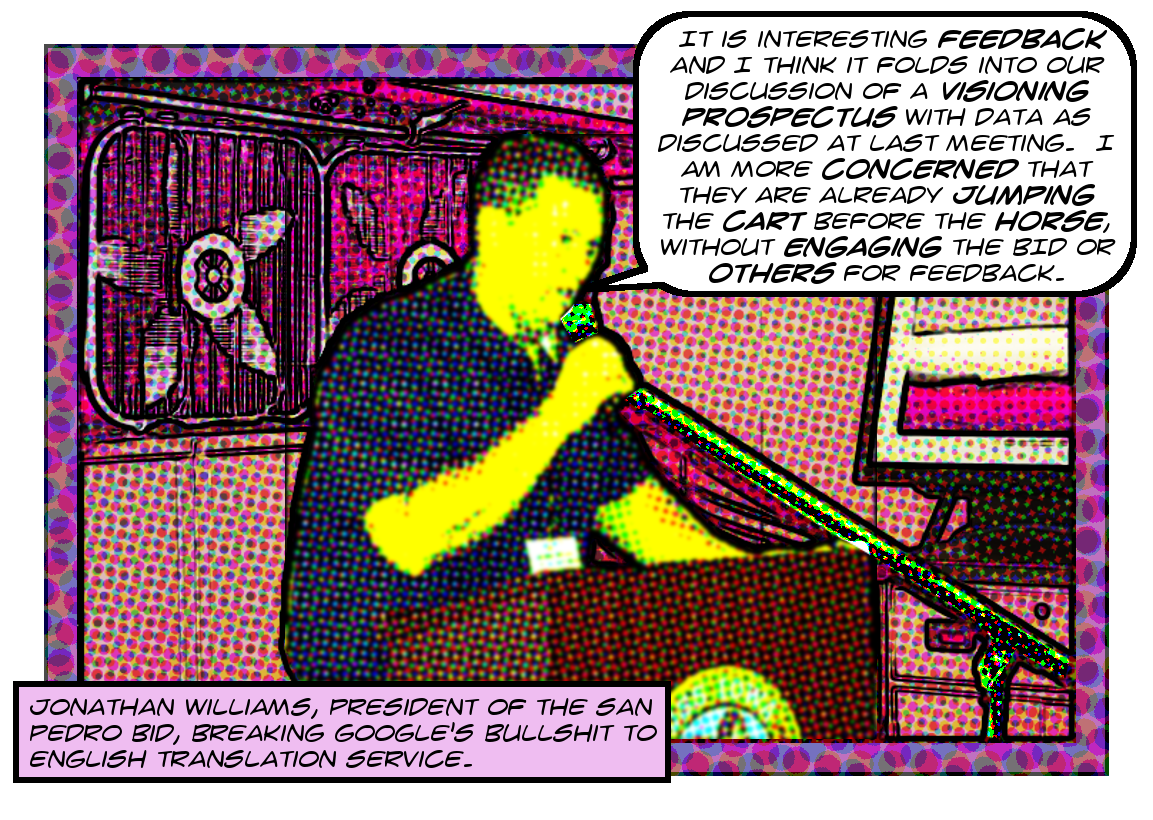 This is just a short note to announce the availability of 1.3 GB of emails between the San Pedro BID and the Port of LA. Because the Port has a seat on the BID’s Board of Directors this request picked up a ton of intra-Board emails, which are fascinating. Here’s a link to the goodies on Archive.Org:

This is a rich, rich release, and you’ll be hearing about details of it for many posts to come. But for now, turn the page to read some inconsequential silliness about the nonsense in Board President Jonathan Williams’s mouth in the cartoon at the head of this post.

So take a look at this email chain. It seems that on June 19, 2017, Board member Augie Bezmalinovich sent the following missive to a few of his compatriots, including the aforementioned Jonathan Williams who, it seems, has something or another to do with the Battleship Iowa:

The Northwest San Pedro Neighborhood Council is proposing a letter be sent to our Councilman requesting several modifications to Downtown San Pedro. This may be something that we wish to support?

Tangentially, if you’re interested, the letter he’s talking about can be found in this agenda of the San Pedro NC, although it’s not that interesting if you’re not from there, and maybe not even then. Anyway, the next day the aforementioned JW wrote a side-note to Lorena Parker:

What are your thoughts on this?

And she, characteristically efficient, not only wrote back in detail, but marked up a copy as well:

Overall, I think the concepts are good, but each one of those suggestions requires discussing individually. Since each one is a big project. I do not suggest that we jump into the deep end without discussing. I think we should think it through and proceed with caution. I would not feel comfortable writing a letter right now until each item has been vetted out with the Board.

And her “notes attached” are pretty intense, you can read them here. The upshot, though, is that we gotta think about everything a lot more but that murals are interesting. Mmmkay, Lorena!

And it seems that the aforementioned JW is on board with that:

Thanks. It is interesting feedback and I think it folds into our discussion of a visioning prospectus with data as discussed at last meeting. I am more concerned that they are already jumping the cart before the horse, without engaging the BID or others for feedback.

And “seems” is the operative word here. That is, his comments seem to be generally positive, but I’ll be damned if I know what the hell he’s talking about. Anyway, that’s the story, told by an idiot, full of sound and fury, signifying nothing, and about par for the course for BIDolatry… So take a look at the newly released emails, read them and wonder why no one can follow the freaking Brown Act, even though it seems really freaking simple, and let me know if you find any gems!

Image of BID Board President Jonathan Williams started its life as this image right here and ended up as you see it at the head of this post, proudly bearing the honorable mark: ©2017 MichaelKohlhaas.Org.