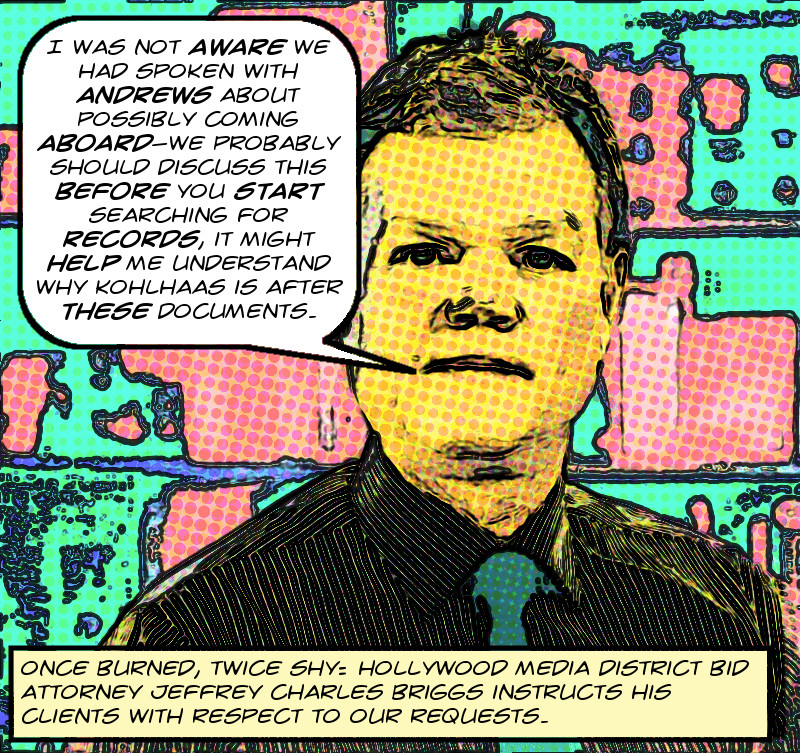 Yesterday I received a bunch of new records from Hollywood BIDboy attorney Jeffrey Charles Briggs, acting on behalf of the East Hollywood BID and also the Media District BID. Some of the stuff had to do with the Media District’s early renewal, which I wrote about yesterday, and today I’m mostly just announcing the balance of the material, which is available from our Archive.Org collections. In particular, we have:

So that’s the new stuff, all except for one little email which didn’t exactly fit into any of those categories. It appears to constitute attorney/client communications, and perhaps it was handed over in error. But legally handed over it was, so I’m publishing it, and you can see a copy and read all about it after the break!

All communications from and to Jim, Lisa, and Laurie (and any other Board member who might have had communications and not shared them with Jim, Lisa, or Laurie) relating to Andrews International. (This should include emails to/from/cc/bcc andrewsinternational.com, emails that contain the term “Andrews,” and any non-email communications.) this should also include any materials submitted to the BID by such as proposals, bids, draft contracts that have been retained, actual contracts, negotiations, etc., from January 1, 2017 to the date you send them to me

And, uncharacteristically, to this particular item, Jeffrey Charles Briggs appended a note to his clients, stating:

NOTE: I was not aware we had spoken with Andrews about possibly coming aboard — we probably should discuss this before you start searching for records, it might help me understand why Kohlhaas4 is after these documents. It might also explain some of the other requests below.

And really, I’m very curious about this. Why does he want to know my purpose in requesting this stuff? It cannot actually be so that he can be sure his clients are responding adequately and compliantly. After all, my purpose does not matter with respect to compliance with CPRA. The law itself, at §6257.5, states explicitly:

This chapter does not allow limitations on access to a public record based upon the purpose for which the record is being requested, if the record is otherwise subject to disclosure.

Well, there’s really no way to be sure what’s going on here. I mean, obviously they’re not going to respond to further CPRA requests about this particular question.5

But if I had to guess, I’d guess that Jeffrey Charles Briggs is still smarting from having sent me this email last March, which proved to be the final bit of proof I needed to make a strong case against EHBID ED and Briggs client Nicole Shahenian for illegally lying about pending legislation. Perhaps Briggs figures that if he can figure out what I’m up to he’ll be able to head off any more such debacles. Well, my guess is probably not! Stay tuned, friends!

At least someone’s learned to minimize their paper trail!

Image of Hollywood Lawyer Jeffrey Charles Briggs started its life journey as this piece of work from the L.A. Times and ended up in its present backwater retirement community proudly bearing a tattoo on its metaphorical forehead reading, in glowing neon letters, the device ©2017 MichaelKohlhaas.Org.