If you read through Security Kahuna Steve Seyler’s reports to the Joint Security Committee of the Hollywood Entertainment District BID and the Sunset-Vine BID you will notice, among many other weirdly inappropriate obsessions displayed by the man in his semi-literate prose, a fixation on the brands of alcohol that his victims are drinking when arrested. When his officers take their trophy pictures of arrestees they hold the open containers in the frame with the brand visible, and Seyler evidently can’t resist giving his opinion. What this has to do with law enforcement we don’t know.

Anyway, Seyler’s bête noire is something called Taaka Vodka. He has effectively criminalized its possession in the BID-occupied areas of Hollywood:1

He’s also obsessed with a brand of vodka called Borski, to the point where he seems overjoyed that it was involved in the BID patrol’s thousandth arrest of 2013:3

Seyler has, like the guy whose hat graces his head in the satirical picture above, evidently inspired his officers to form a mystical cult whose rituals include some kind of idolatry involving Taaka:2

It’s so very important to him that even in the face of genuine tragedy, e.g. the death of a homeless man on the sidewalk, Seyler can’t resist mentioning the Taaka:3 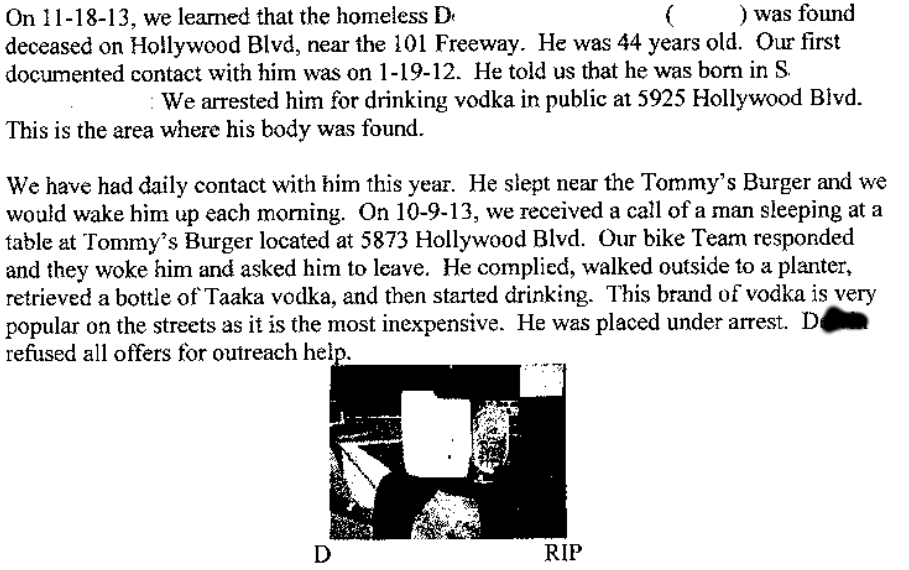 The man drank cheap vodka and refused to be helped. Thanks for pointing that out, Steve, and for such a lovely memorial photograph. I hope you’re remembered as kindly when the time comes.

The image of Steve Seyler was taken at the October 9, 2014 meeting of the Joint Security Committee and is ©MichaelKohlhaas.org. It is modified with a Nazi hat worn by Heinrich Himmler in this image, which is in the public domain by force of arms.