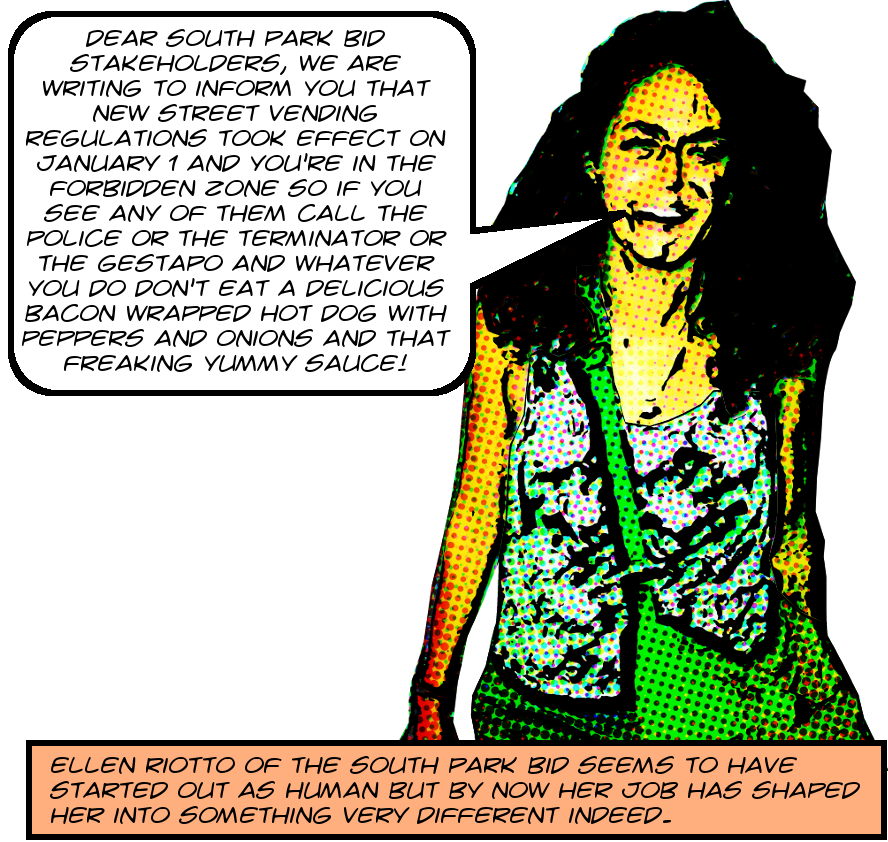 The other day LA Taco tweeted out this picture of a no-vending sign near Staples Center and a lot of people were angry and confused. This is the story of how and why1 those signs appeared recently. The story begins with Ricardo Lara‘s monumental Sanity in Street Vending Bill, passed by the California Legislature last year over the strident objections of zillionaires and their BIDdie minions all over the state. The law essentially legalized street vending everywhere, while leaving some really minimal regulatory powers to cities.

One of the regulatory powers that the law allows is the establishment of no-vending zones. But these can’t be established on a mere whim, or just because people hate vendors. Rather any such restriction must be “directly related to objective health, safety, or welfare concerns.”2 But the City of Los Angeles never met a loophole that it couldn’t stretch into a six lane freeway at the behest of the local zillionaires, and our esteemed Councilmembers jumped all over this one.

They went into an embarrassing frenzy of zillionaire-pleasuring and directed the City Attorney to figure out how to establish no-vending zones everywhere any BID or anyone else with enough influence asked them to. The list ended up including the Hollywood Bowl, the Venice Boardwalk, most of Hollywood Blvd, and, of interest to us today, the area around Staples Center.

Lara’s bill took effect on January 1, 2019, so prior to that, in preparation for what they saw as the impending Vendorgeddon, zillionaires all over the City began preparing for vigorously psychotic enforcement of these last few no-vending zones they’d managed to preserve, at least for now. As I said, today we’re focusing on Staples Center, but I’m sure the same kind of thing is happening in all the putative no-vending zones.

I’ve managed to uncover two distinct phases of the process so far. In early January 2019, Ellen Riotto of the South Park Business Improvement District, in which Staples Center situates, notified businesses in the no-vending zone and encouraged them to call LAPD on vendors. A little later, around January 20, 2019, Lee Zeidman, president of Staples Center and member of the board of directors of the South Park BID, used his considerable political power, focused by his flunky Riotto, to harangue City staff about the need for superexponentially increased anti-vending enforcement along with no-vending signs.

He also threatened to hire private security to enforce anti-vending laws on public streets if the City didn’t start enforcing the law itself. And all this focused power ultimately had its effect with the placement of the signs, as we have seen. I don’t presently know if enforcement was in fact stepped up, but I am continuing to look into the matter. Turn the page for a detailed account along with links to and transcriptions of selections from the relevant emails.
END_OF_DOCUMENT_TOKEN_TO_BE_REPLACED