General background: This post is about the Greater Leimert Park Village Business Improvement District. I sued them over CPRA compliance in 2018 and they produced records and settled up with my lawyer, Anna von Herrmann, in 2019.
Technical background: There are two phases in the establishment of a business improvement district. The first is the petition stage. In order for the establishment process to move forward petitions in favor representing more than 50% of the total assessed value in the BID must be submitted. If this happens the process moves to the balloting stage. In order for the BID to be established ballots representing more than 50% of the total assessed value represented by the ballots received must vote in favor of formation.

When the City of Los Angeles started up the modern version of its business improvement district program in 1994 the City Council required the City Clerk to vote yes on both BID petitions and ballots for City-owned property. In 2018, though, in apparent violation of this requirement, Clerk Holly Wolcott seems to have unilaterally decided not to vote her petitions yes until private owners of property had already brought support over the 50.1% threshold.

She stuck to this policy in 2020 with the Chinatown BID renewal fiasco to the point where Gil Cedillo introduced a motion requiring her to vote the petitions yes even though she was already required to do so by Council’s 1996 action. So isn’t it interesting that the Greater Leimert Park Village BID, which renewed in 2019 for five years beginning in 2020, would have failed to be established at both the petition stage and at the ballot stage if Wolcott hadn’t voted the City’s outrageously high 12.8% of the assessed property values in favor of formation?
END_OF_DOCUMENT_TOKEN_TO_BE_REPLACED

As you may recall, last November, due to their refusal to even so much as respond to my requests for material under the California Public Records Act, I was forced to file a writ petition against the Greater Leimert Park Village Business Improvment District.1 I haven’t written much about it since because it’s mostly been stalling and negotiation. However, I am pleased to announce that the other day we finally settled the damn thing!

They have agreed to pay my lawyer, the incomparable Anna von Herrmann, $9,000 for her time and also to produce the records. As importantly, they’ve agreed to produce the emails I asked for in EML format.2 At first the BID wanted to include a freaking nondisparagement clause and a nondisclosure clause in the agreement, but I refused and they didn’t insist. After all, disclosure and disparagement are two of the four pillars on which this blog stands!3

Get a copy of the settlement agreement here, watch for the publication of the emails when they come in, and get ready for a steady stream of information about this rapidly gentrifying area and the BID’s involvement in the processes that that entails.
END_OF_DOCUMENT_TOKEN_TO_BE_REPLACED 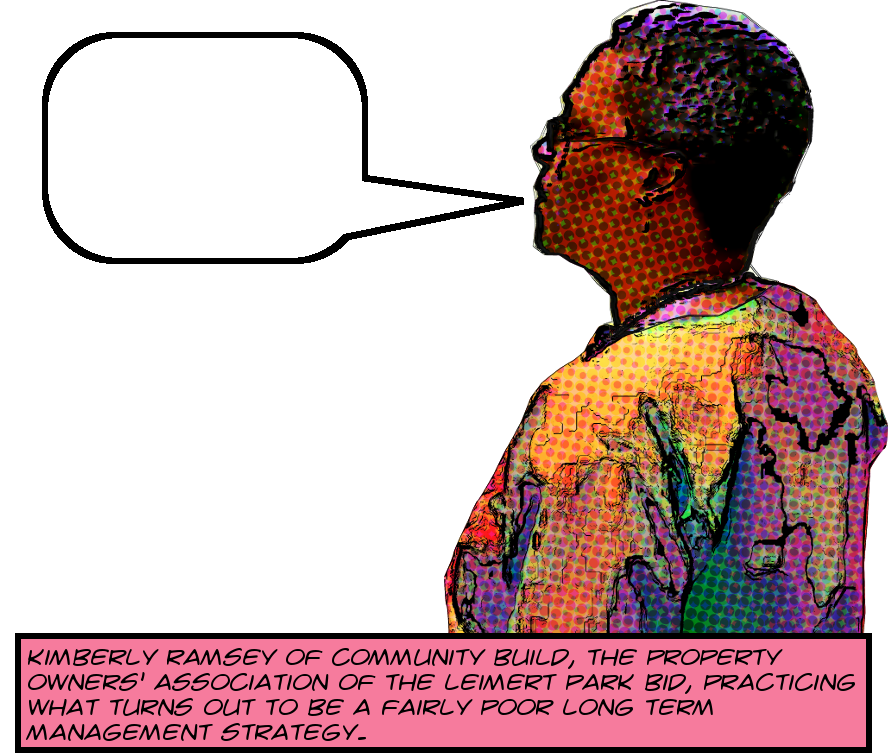 In short, though, this BID is of interest for two overarching reasons.1 First, and least, because it’s in the process of renewing, a process which is both fascinating and important. BID renewal has interesting intersections with the Municipal Lobbying Ordinance and other core political issues. Everything about it is important. By ignoring my CPRA requests the Leimert Park Village BID is obstructing our increased understanding of this essential process in the lives of our BIDs.

Second, and more importantly, as everyone knows, Leimert Park is presently undergoing lightspeed and brutal gentrification. This, in turn, is related to City Attorney Mike Feuer’s putative gang crackdown at Baldwin Village Apartments. It’s well known that the City uses these actions as a way to make neighborhoods feel safer for white residents and thereby encourages and supports gentrification.

Business improvement districts have been active agents for gentrification in Hollywood, Downtown, in Venice, and probably elsewhere. Thus the question of whether the Leimert Park Village BID is involved at all in this process is inherently interesting. Even the fact that they’re not involved, if true, would be of great public interest.

And yet, by refusing to respond at all to my queries, the BID is thwarting the public’s ability to understand these weighty matters. But of course, there’s nothing surprising here. This, it seems, is just one of the things that BIDdies in LA do. Stay tuned for further info and turn the page for transcribed selections from the petition.
END_OF_DOCUMENT_TOKEN_TO_BE_REPLACED