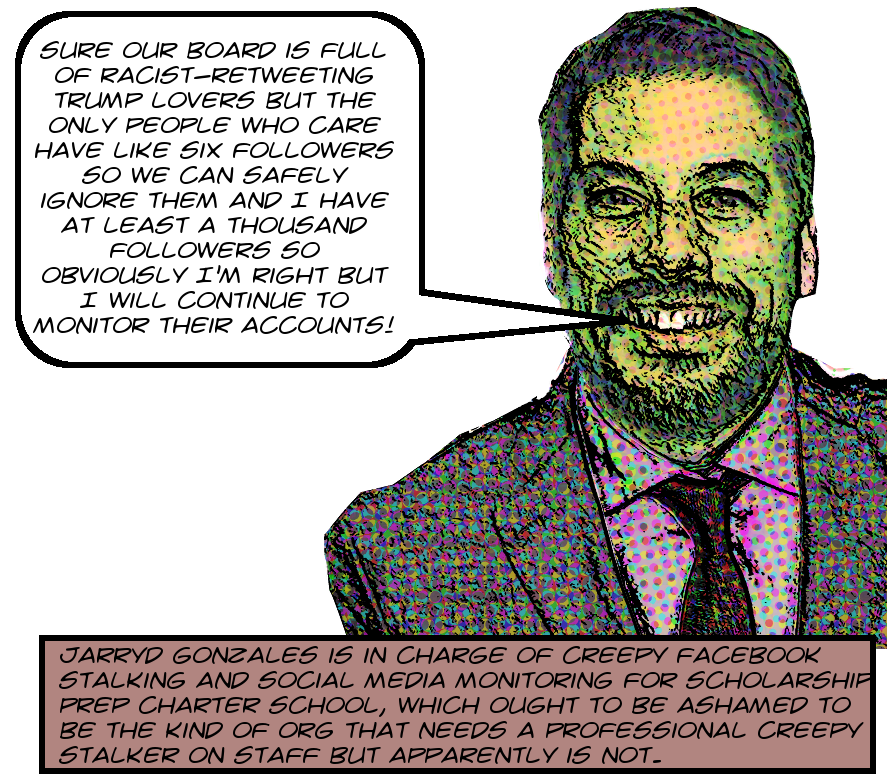 You might think, by the way, that Scholarship Prep wouldn’t worry about this kind of talk. They’re a multi-zillion dollar organization, well-funded, thoroughly lawyered up, on the right side of the powerful, and so on. Why would anyone think they might be worried about a little ragtag band of partisans sniping at them from the most obscure of the obscure little backwaters of Twitter.1 END_OF_DOCUMENT_TOKEN_TO_BE_REPLACED 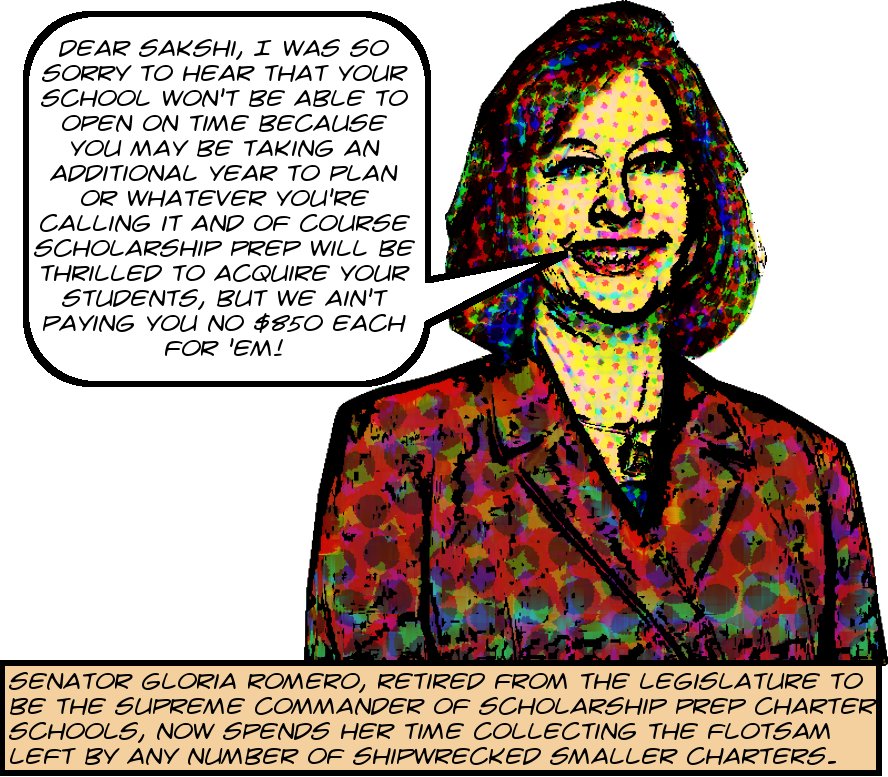 This is just the briefest of notes to bring you up to date, or at least as up to date as the information presently in my possession will allow, on the slow-mo bridge collapse that is the story of GANAS Academy and its galaxy-brained founder Sakshi Jain.1 Jain’s universally reviled2 plan to colocate her creepy little charter school on the campus of the well-beloved neighborhood public school Catskill Elementary in the City of Carson met with pushback from the community on a massive scale, which was ultimately successful in convincing her to give up on colocation and to postpone opening her school for at least one more year.

This kind of thing, for one reason or another, happens all the time with charter schools. They vanish, leaving enrolled kids in a desperate situation. It doesn’t happen, can’t really happen, with actual public schools. This lack of stability is one of the approximately eleventy zillion reasons why charter schools are pernicious. According to the Daily Breeze, Jain announced on July 12, 2019 that GANAS would not be opening this year. This left enrolled students, for whom, by the way, Jain had paid $850 per each to a super-genius recruiter named Ed, a little more than a month to find a school to attend this fall.

But emails I recently obtained from Scholarship Prep Charter Schools show that Jain had already determined as early as July 1, 2019 not to open GANAS for this school year.3 On that day Jain was introduced to former state senator Gloria Romero, supreme commander of Scholarship Prep, by Chris Copolillo, California Charter Schools Association überlobbyist, for the express purpose of hooking up the students stranded by Jain’s instability and unwillingness to honor her word with one of Scholarship Prep’s schools in Wilmington.

On the one hand, I guess it’s commendable that Jain was thinking of the future of the students she’s stranded. On the other hand, it’s pretty awful that by July 1 she had already determined not to open her school, and yet didn’t announce it publicly for another 12 days. Surely the families who were relying on her to educate their children could have used the extra time to place their kids elsewhere.

It’s also interesting, as you’ll see if you read on to the transcriptions, that in her conversations with Romero, Jain nowhere explained exactly why it was that her school wasn’t going to open. The nearest anyone came to an explanation was Copolillo’s extraordinarily disingenuous statement that Jain “may be taking an additional year to plan”. Which I suppose is the truth, but it’s certainly not the whole truth.

Another small but essential revelation here is that CCSA isn’t just a lobbying organization, it also micro-facilitates the daily operation of charter schools. Not surprising, I guess, but I just wasn’t aware that this kind of thing was among the services they provide. Anyway, read on for full transcriptions of the emails and experience for yourself the private talk of privatizers.
END_OF_DOCUMENT_TOKEN_TO_BE_REPLACED