I wrote recently about how LAPD Legal Affairs Boss Bryan Lium violated LAMC 49.5.5 by expediting a CPRA request for journalist Aura Bogado while at the same time hindering a request from Stop LAPD Spying. Today’s story, about how LAPD CPRA Unit Boss Marla Ciuffetelli did precisely the same thing for KCET journalist Denise Chan, shows that Lium’s antics with respect to Bogado’s request were not an anomaly.

Ciuffetelli has her subordinates tag requests from her favored media outlets, presumably to distinguish them for expedited handling. And, like Lium, she was willing to send Police Commission Executive Richard Tefank innumerable emails encouraging him to hurry along Chan’s request while repeatedly mentioning the fact that she works for KCET. And, like Lium’s beneficiary Aura Bogado, Denise Chan’s request got filled comparatively very quickly, in less than two months. As we’ve seen, other requests, from less favored requesters, can linger for years with no action at all.

Chan filed Request 20-3691 on June 11, 2020. That link leads to the actual NextRequest page as seen by a user not logged in as Chan or an administrator. But NextRequest request pages have a lot of material not visible to the general public. For instance, take a look at this PDF printout of the same request, but as seen by a logged-in user with staff privileges. In particular, make note of the tags added by the LAPD CPRA Analyst: LAPD: CAT-2, LAPD: CPRA (non-SB1421), LAPD: Media, LAPD: Other 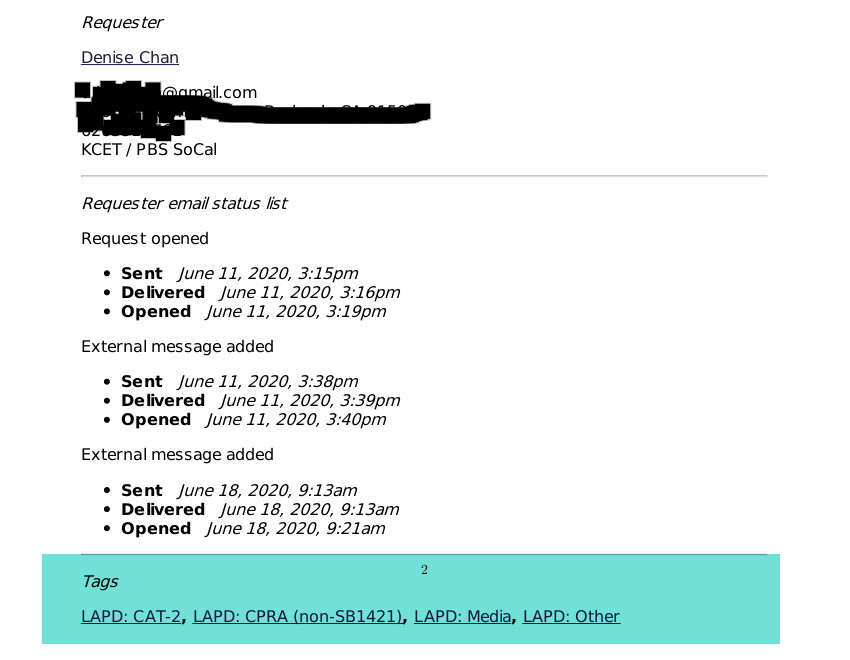 Unfortunately I don’t yet have any way of figuring out what those tags actually mean. But there is still some useful information to be gained. For instance, I’m willing to guess that the LAPD: Media tag means that the requester is from a media organization that LAPD favors for as-yet-undertermined reasons. This may seem obvious, but it’s not for a number of reasons.

In particular, take a look at this request that I submitted to LAPD on July 9, 2020. The linked-to PDF is again the logged-in administrator view, showing the tags: LAPD: CPRA (non-SB1421), LAPD: High Priority , LAPD: High Profile, LAPD: Other Note that although I explicitly and truthfully identified myself as a member of the media the analyst did not add that LAPD: Media tag.

However, they did add at least one tag not applied to Chan’s request, which is the LAPD: High Profile tag. I know for a fact that this tag refers to me personally. To see this, take a look at Marla Ciuffetelli’s weekly CPRA report for the week of August 15, 2020. You can see up at the top a headnote:

So Ciuffetelli identifies Chan as a member of the media but refuses to identify me as such. And this isn’t just a theoretical question of categories. It has measurably substantive effects. So just like we saw Bryan Lium do with Aura Bogado’s request, we find Ciuffetelli expending a great deal of effort to make sure Chan’s request was completed as quickly as possible. Behold Ciuffetelli’s emails to Police Commission Executive Director Richard Tefank urging him to hurry, hurry, hurry up and get Chan’s records ready:

• July 15, 2020 — Ciuffetelli to Tefank — I wanted to reach out to you to see if there was any update on the CPRA request for the resumes of the Civilian board members. Debra Gonzales provided an opinion to Lt. O’Connor that they were not exempt in totality, but that certain personal information could be redacted out. I am in the office the rest of the week and available to speak to you at any time that is convenient for you.

• July 24, 2020 — Ciuffetelli to Tefank — Thank you again for the resumes you sent earlier for BOR civilian participants. It appears that Eleanor Montano’s was not included and I was wondering if you would be able to forward that one. Also, the request asks for resumes of applicants as well. Is it possible for you to send us the resumes of all of those who applied to be on the BORs from 2000 to present? Thank you so much.

• July 30, 2020 — Ciuffetelli to Tefank — I’m just checking in to see if you were ever able to speak to Debra about the request for resumes for the applicants? Also if you were able to find anything on Eleanor Montana?

• August 5, 2020 — Ciuffetelli to Tefank — I’m sorry I was clear as mud in my last email! This is the old request that we already have (NR 20-3691) for the resumes for BOR civilians. The requester is Denise Chan from KCET/PBS. These are the resumes that you already provided us, in redacted form. We are not providing resumes of the applicants who were not selected based on the advice that you received from Debra, but these are the resumes that you already provided us. I believe they should be good to go and ready for release as you guys already redacted them, I just wanted to give you one last bite at the apple before we release. Thanks!

• August 5, 2020 — Ciuffetelli to Tefank — We are ready to release on this CPRA request and I wanted to give you a chance for final review on the redactions if you would like. We went over them again and caught an extra couple of items. Let me know if you are o.k. with them as redacted and we will upload and close out this request.

And all this personal positive attention from Ciuffetelli paid off for Chan. Her request was closed with the production of responsive records on August 6, 2020, which is less than two months after Chan submitted it. Meanwhile, on July 24 2020, the same day that Ciuffetelli checked in with Tefank to tell him that the material he’d gathered for Chan’s request, Ciuffetelli also had something to say to Tefank about my request:

We have received another CPRA request for texts received and sent by BOPC during all BOPC meetings in 2020. Also, any communications with the COP via any “chat” platform during these meetings. It is the same requester as the last CPRA request, and he is a chronic requester, so I anticipate we can continue to see more of these. He requested the 6/30/20 meeting last time and I believe the 6/2/20 meeting was previously published in an unrelated release that we can refer him to.

This is the one without the LAPD: Media tag, although as far as LAPD is concerned I am precisely as much a member of the media as Chan is, and as much as any person is as far as the CPRA is concerned. See the difference in Ciuffetelli’s tone! And it had its desired effect, which is that Chan’s request was done in less than two months, whereas LAPD has refused to fulfill any of my requests since the Summer of 2020.1

So here we have Marla Ciuffetelli, acting on behalf of the government of the City of Los Angeles, deciding which members of the public are worthy of having their requests processed according to the law and which must suffer the ongoing denial of their constitutional right to have LAPD comply with the California Public Records Act.

But the First Amendment to the U.S. Constitution is well-understood to forbid American governments at all levels from having anything at all to do with deciding which media outlets are worthy and which are not. As Felix Frankfurter so succinctly put it in Pennekamp v. Florida (1946):

“[T]he purpose of the Constitution was not to erect the press into a privileged institution but to protect all persons in their right to print what they will as well as to utter it.”

Not only that, but obviously she’s misusing her position, which includes a basic requirement that she follow the law. And that means Ciuffetelli is also violating LAMC 49.5.5, which as you probably know prohibits City staff from misusing their positions to create or attempt to create private advantages or disadvantages for people.

Clearly her innumerable emails to Tefank about Chan’s request along with the fact that she uses specific labels to distinguish requesters who are good and worthy of respect from those of us she has determined to deny the equal protection of the law. So like with Lium I will be filing a complaint against Ciuffetelli with the City Ethics Commission. Very, very soon, now, so stay tuned!