In April 2016 LAPD was out hunting suspects with police dogs. One of the dogs scratched on the door of Heller Castillo’s house. He thought the police wanted him to open the door and did so, at which time he was attacked by one of their dogs. Castillo filed a suit. In January 2020 he City Attorney’s office recommended in January 2020 that City Council authorize an aggressive settlement offer of $75K that Lisa Lee, the Deputy handling the case, thought wouldn’t be accepted but wanted to make anyway for strategic reasons, even though she knew the City was at fault and was convinced they’d lose badly if the case went to a jury. Here’s a copy of the confidential report that Lee sent to City Council in January 2020 in advance of the closed session called to discuss the issue.

But prior to such meetings the City Attorney’s office sends a confidential report to the City Council so that they can be ready to discuss. These reports are generally exempt from release4 under the California Public Records Act, but from time to time I manage to lay my hands on a copy of one. This last happened with the employment practices case brought by LAPD officer Ray Garvin against the City of Los Angeles.

And today I have another such confidential report for you. This is from January 2020 and has to do with the case Castillo v. City of LA,5 in which a police dog bit plaintiff Heller Castillo during an LAPD operation in which he was in no way a suspect. Lisa W. Lee, the Deputy City Attorney handling the case, recommends in this report to City Council that she be allowed to make a 998 offer of $75K to settle, even though, as Lee says:

it is anticipated that Plaintiff will not accept an offer of $75,000, [but] we believe that we should make the offer as a tool to encourage settlement.

Lee doesn’t think Castillo would accept $75K because he is asking for $800K, because the state of California imposes strict liability for police dogs biting non-suspects, and the facts are horrific, so that a jury is unlikely to find in the City’s favor:

Plaintiff Castillo, who resided inside, opened the door when he thought he heard scratching and knocking at the door. As the door suddenly opened inwardly, the K-9 police dog partially entered the door. The K-9 officer immediately recalled the police dog to his side and secured him with a leash. Plaintiff Castillo exited the structure and advised that he had been bitten by the K-9 police dog.

See what’s going on? LAPD has attack dogs running free in a neighborhood. They announce over loudspeakers that they’re out there hunting human beings with dogs. A completely uninvolved man quite reasonably thinks they want him to open his front door. When he does so he is attacked by LAPD dogs specifically trained by LAPD to attack people.

Then, instead of paying Castillo for his expenses and pain, instead of recommending that City Council force LAPD to train their goddamn dogs or even stop using them, instead of even recommending that they do anything useful whatsoever, the City’s lawyer recommends an aggressive strategy to get him to settle for much less than he deserves. Here’s her reasoning, which is pretty gross:

Although it is anticipated that Plaintiff will not accept an offer of $75,000, we believe that we should make a California Code of Civil Procedure § 998 Statutory Offer of Compromise (Offer of Judgment) as a tool to encourage settlement.

Pursuant to Code of Civil Procedure, section 998, an offer of judgment can be made to the plaintiff that would allow judgment to be entered in his favor and against the City of Los Angeles, on terms specified in the offer. The offer recommended would be to allow judgment be entered against the City of Los Angeles in the amount of $75,000. This amount includes the plaintiff’s costs accrued to date. The offer would specify that it does not constitute an admission of liability by or on behalf of the City, and that the City expressly denies liability.

Acceptance of the Code of Civil Procedure, section 998 offer would also act to release and discharge the City from any and all claims that were or could have been alleged by the plaintiff arising out of this incident.

Don’t come at me with zealous representation and whatever, by the way. I get the theory, and I get the practice. I even think adversarial court proceedings are a good system. But the City of Los Angeles and the citizens of Los Angeles are in a different relation to one another than two random private civil litigants.

I will go so far as to say that Section 998 offers by cities to residents are never good policy. If a lawsuit against the City is in bad faith there are other tools available for handling that issue. If it’s in good faith the City ought to figure out what’s fair, what’s just, what’s reasonable, and make a legit good faith offer in return, and they ought to do so publicly. This kind of aggressive self-serving out-of-tent-pissing nonsense is not OK in this context.

We set up and support the City government to carry out our purposes, which is the only legit reason even to have a City. Cities are expensive, delicate machines. They are incredibly time-consuming and expensive for their citizens to maintain. We’re doing the work, paying the taxes, attending the meetings, scrutinizing the officials, reading their emails and agendas and reports and motions, organizing, protesting, and participating, and the City squanders it all on this kind of immoral crap.

My purposes, and the purposes of an awful goddamned lot of people who live here, emphatically do not include aggressively lowballing victims of LAPD violence like this while ignoring the structural problems, like racist LAPD policies implemented by racist LAPD officers at the behest of racist City of LA officials. Not to mention those vicious dogs they use.6 The City of LA could end this crap tomorrow, but they won’t until we force them to, which we certainly will.

Meanwhile, Castillo didn’t accept the offer, if it was even made. There’s a trial setting conference scheduled for April 2021. If anything interesting goes on, I’ll try to let you know. meanwhile, read the whole report. There’s a lot more in there than I discussed. And here are images of the pages: 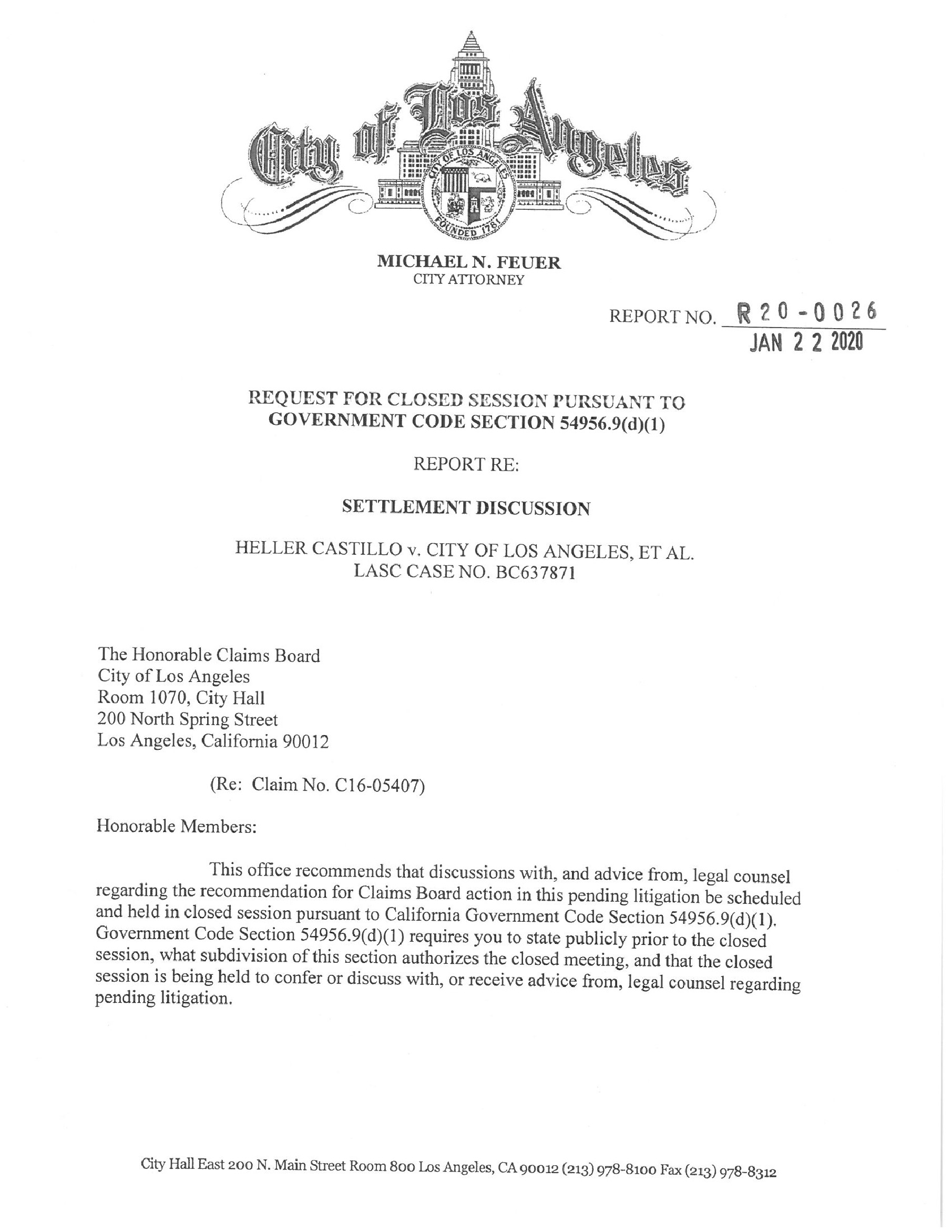 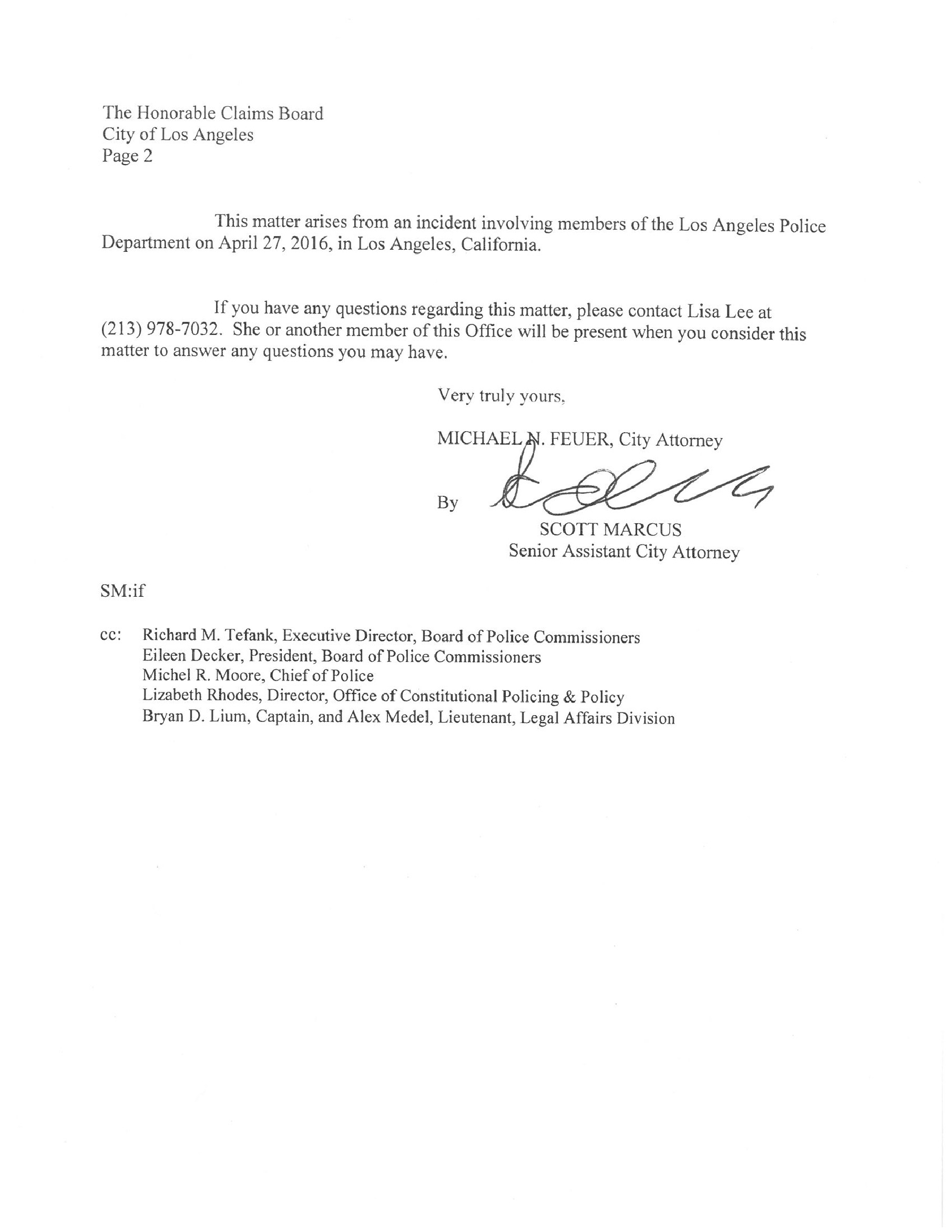 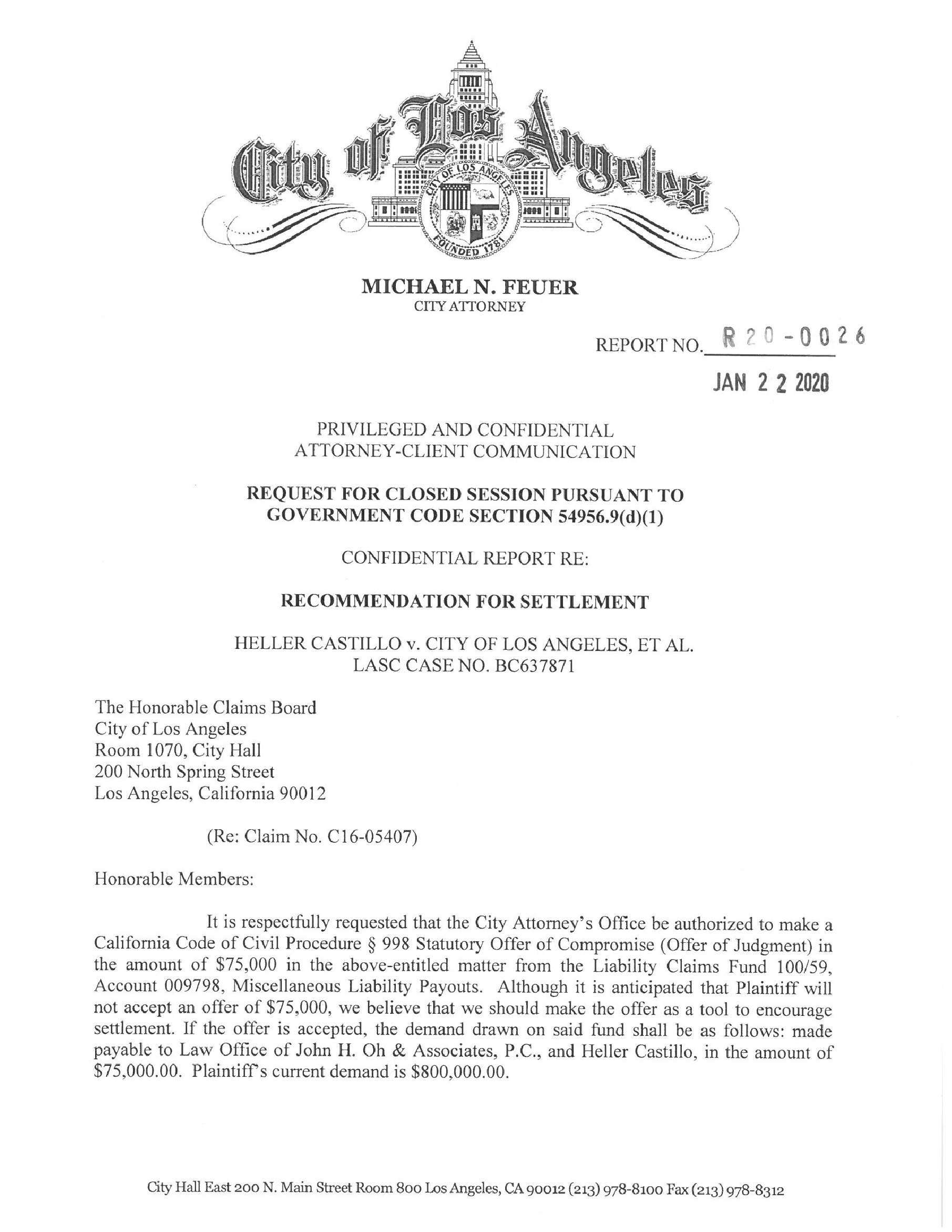 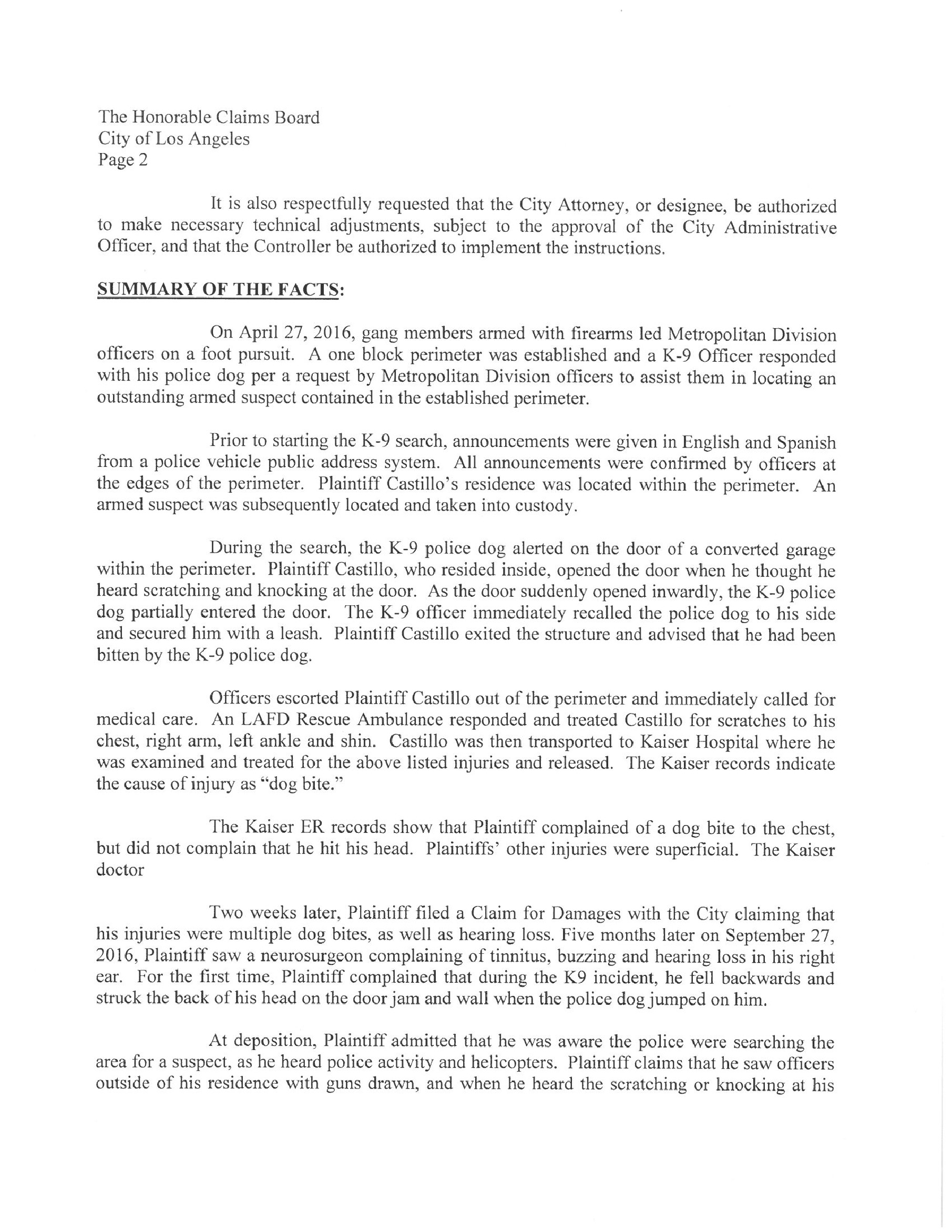 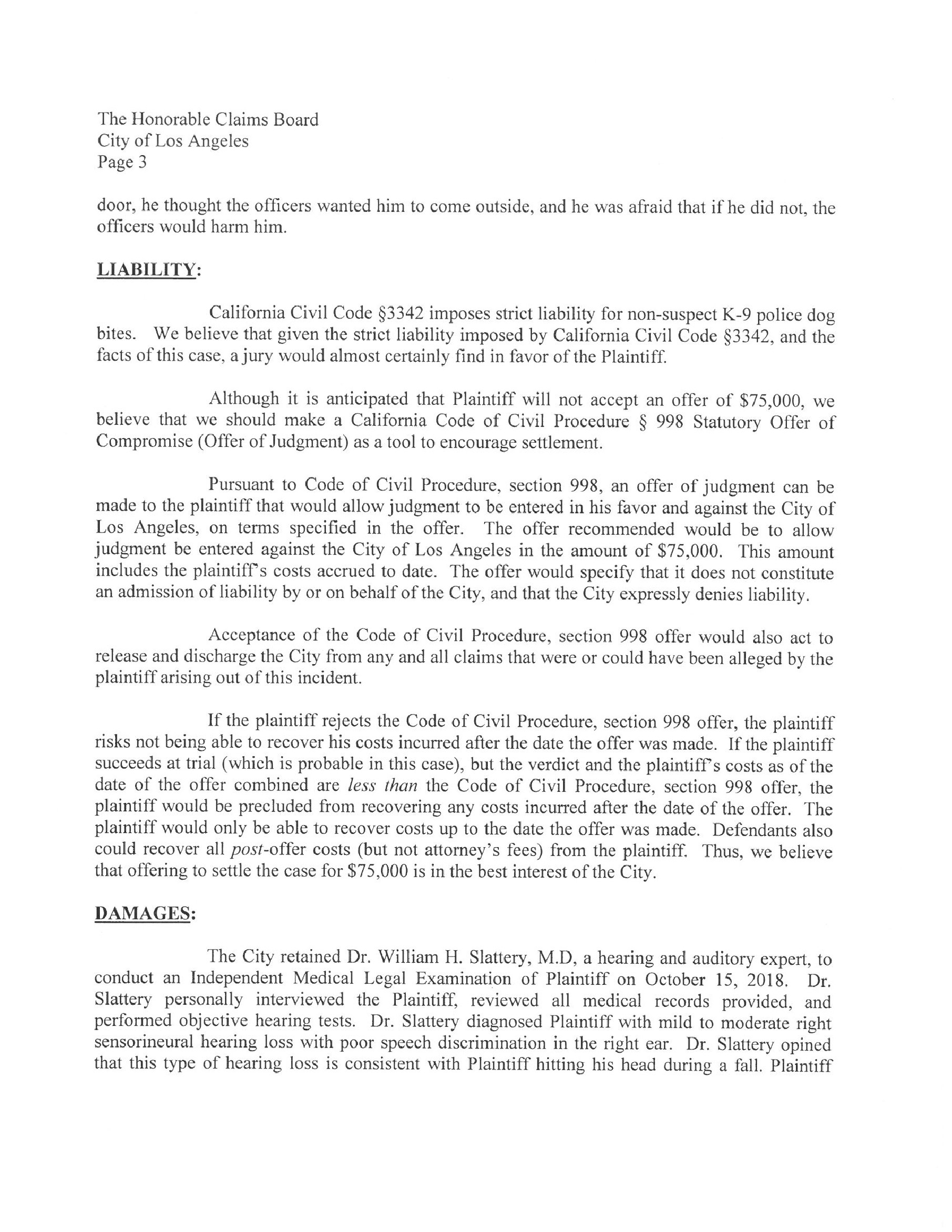 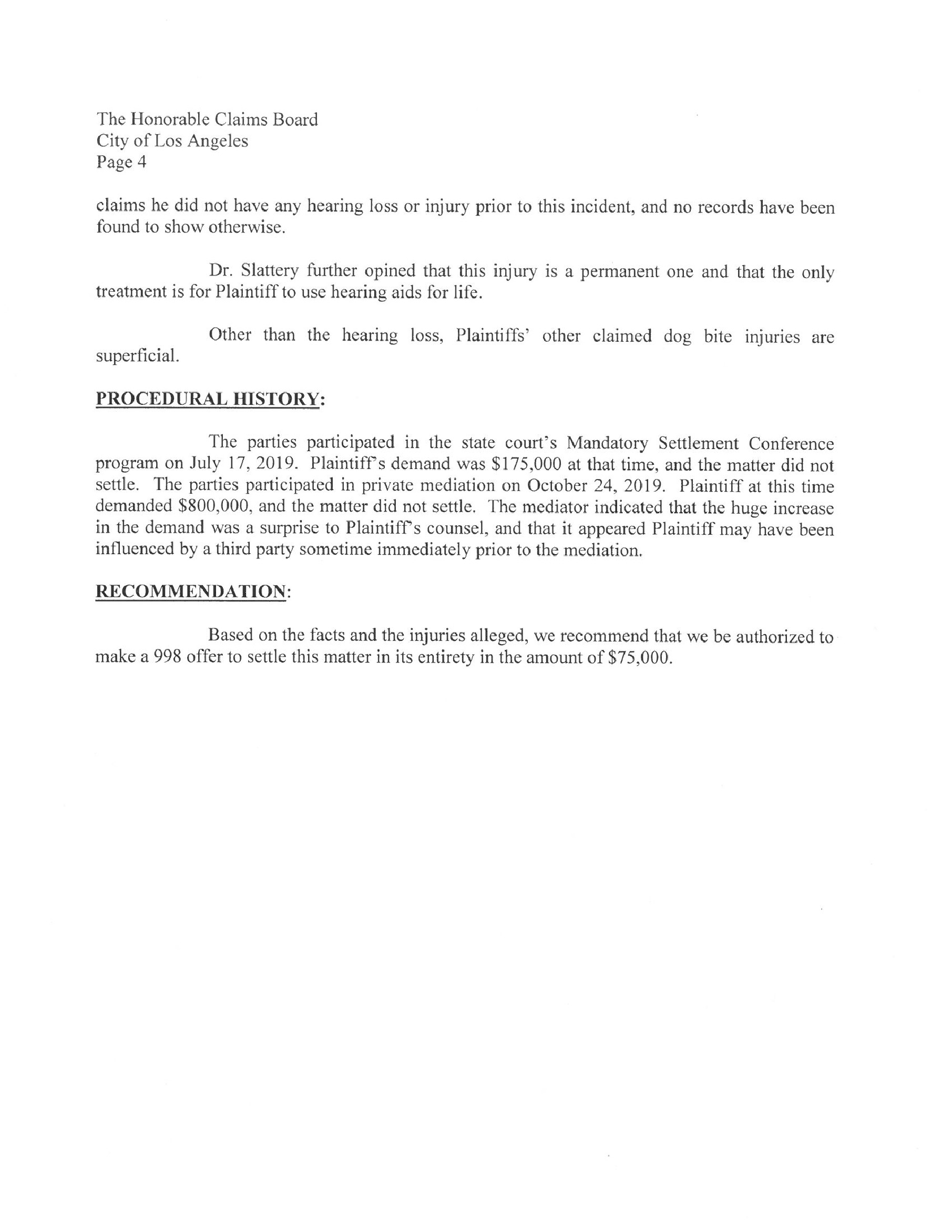 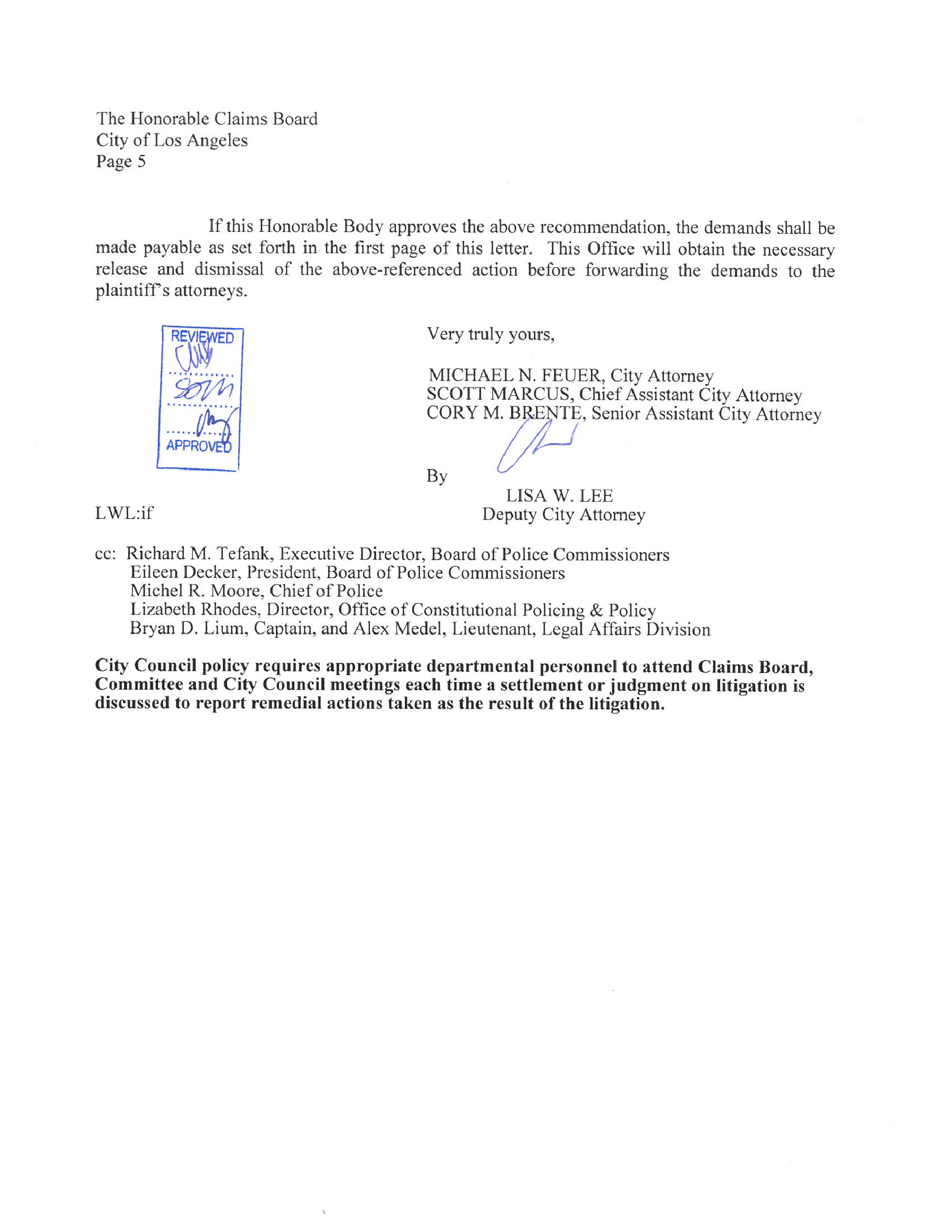