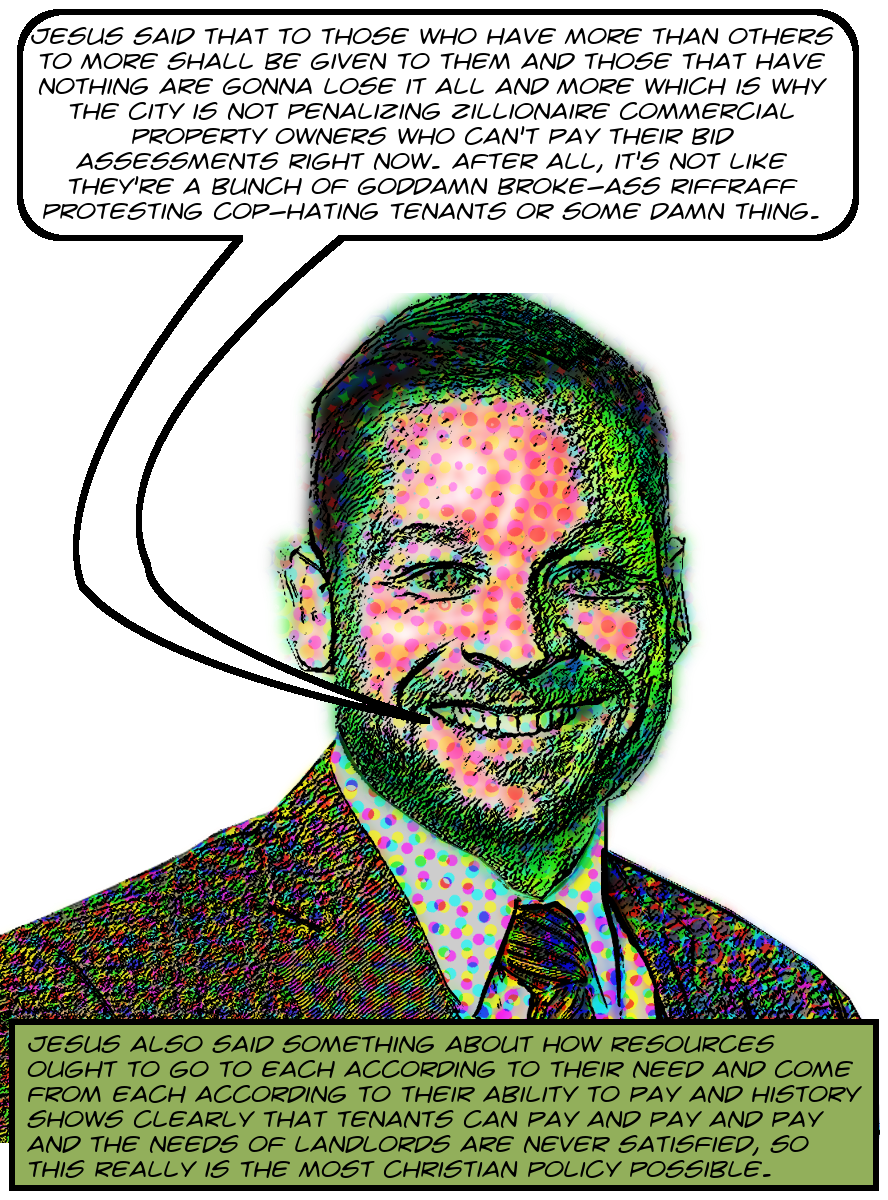 Which I suppose gives City officials some power over how and when they’re collected, or at least that’s the only way I can make sense of a statement made by Dr. Kris Larson, executive director of the Hollywood Property Owners’ Alliance at their recent board meeting. Larson told his board that “while property owners are technically still on the hook to pay their assessments the City is not penalizing those that are late collected.”

I follow City Council agendas pretty closely and I haven’t seen anything about not penalizing commercial property owners for late BID assessment payment. This is almost certainly something the Mayor and/or the City Clerk2 implemented unilaterally using executive rather than legislative power. It was that easy for commercial property owners to get tax relief. No one had to agitate, demonstrate, plead, threaten, mock, or anything. The City saw two problems, very similar, and like a bad parent with a favorite child chose to solve only one of them.

And no one said anything about proving that payments were late due to the pandemic. No one seems to be suggesting that the City take late payers to court so they can prove they’re not just unjustified deadbeats. This is an easy program, designed to respect the autonomy and dignity of the debtors. Precisely the opposite of the punitive, intrusive, unworkable, burdensome system imposed by the City on tenants seeking what little relief is available.

Now I get that the two problems aren’t exactly parallel. In particular, it’s plausible that if the City controls the collection and enforcement of BID assessment payments then the City has the power to suspend them.3 But for the most part the City doesn’t own rental properties, so freezing or forgiving rent would require extra work, but it’s not impossible work, it’s work that’s just more complex.

And it wouldn’t have been impossible to make the two programs work well together. A lot of commercial property in BIDs is mixed use or residential4 and if the City is going to give landlords tax relief through not penalizing late payments it’s certainly not out of scale to condition it on meaningful rent relief for their tenants. And if the one can be imposed through executive power surely the other can as well. And yet it is not.

Image of Dr. Kris Larson is ©2020 MichaelKohlhaas.Org and now he’s just somebody that I used to know.