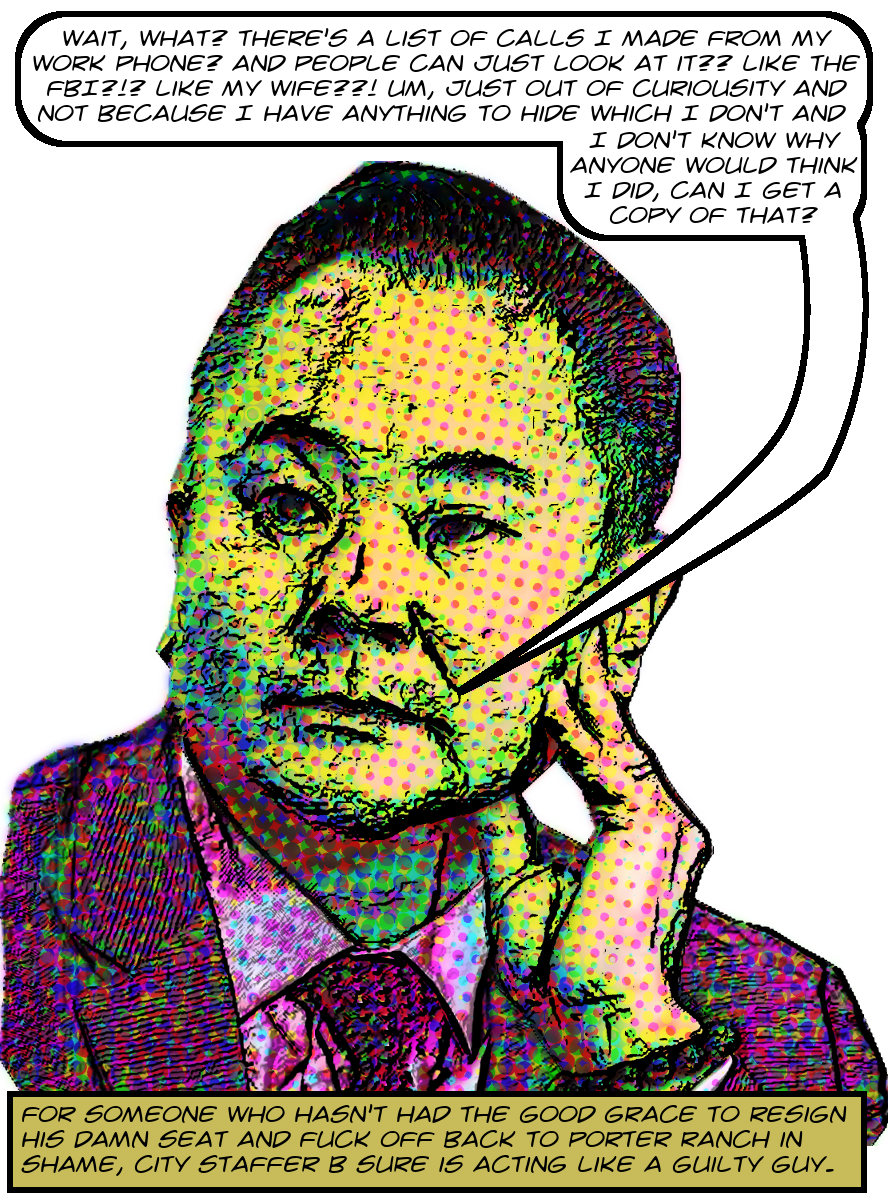 By now the whole world knows that John Lee, Los Angeles City Councilmember for District 12, formerly chief of staff to now-indicted former CD12 rep Mitch Englander, accompanied his boss to Las Vegas in June of 2017 to be plied with liquor, money, and sex in exchange for the usual list of favors to real estate developers. And Lee, known as City Staffer B in the indictments issued so far, admits going on the trip but denies receiving anything untoward or engaging in suspect or illegal activities.

And even though Englander’s indictment doesn’t mention anything leading up to that June 2017 trip, it’s clear that he and surely also John Lee had to have been conspiring with the developer for a while. Without a lot of prior discussion and understandings how would these conspirators have trusted one another enough to offer and accept such blatantly corrupt incentives? The indictment refers repeatedly to text messages between Englander, Lee, and the corrupt developers, so at least some of the pre-Vegas communication probably took place via cell phone.

And the City issues cell phones to Councilmembers and selected staff. While most criminals can probably understand that it’s a bad idea to arrange crimes on your work phone, it’s not impossible that Lee1 didn’t realize this at first. Regardless of the wily criminal tendencies of these political thugs they’re not bright people or at least have astonishingly poor impulse control. So perhaps early on Lee did use his work phone to communicate with his co-conspirators?2 And maybe at some point he realized that he might be leaving evidence by doing so? Which is speculation, of course.

But speculation or not it would certainly explain the highly suspicious fact that in January 2017 Lee asked his aide Brandy Turnbow if it were possible to get detailed billing records for his work phone from Verizon. By that time he’d worked for the City of Los Angeles for more than 20 years and yet the question hadn’t come up for him before his boss was running a criminal conspiracy out of City Hall. So Turnbow emailed Matthew Webster of Verizon asking him about it. And after a lot of tedious discussion he sent her the information she requested as an email attachment.

Which was tremendously good luck, because of course City emails and their attachments are public records. Which is how I laid hands on one of the most remarkable documents I’ve had the good fortune to receive during my long career of requesting public records. This is a detailed 300+ page3 call-by-call log of CD12 work phone activity from October 2016 through January 2017.4 It has all of Mitch Englander’s work phone calls, all of John Lee’s, and also other staffers. It includes not only the number called but the location of the caller’s phone when the call was made.

I have some ideas about how to process this material, but it’s tricky.5 I’m sure it’s full of good stuff. And I’m sure that some of that good stuff is incriminating, which I’m sure is precisely the reason why, in January 2017, when Englander’s crime ring must already have been starting up or running smoothly, John Lee all of a sudden got so concerned about seeing what information was revealed by the log of calls he’d made. Or maybe it’s not crime he was worried about.

Before seeing this log I hadn’t realized that the caller’s location when the call was placed was included. Maybe he was worried that he’d told someone he was in Place A when he called but he was actually in Place B. Or maybe something that hasn’t occurred to me. But whatever it is, it’s at least interesting that in January 2017 Lee wanted to see this information.

In any case, I hand-copied twenty entries into a spreadsheet so you can see what’s available in this record. That’s reproduced below. Also, Archive.Org’s OCR managed to convert the entire PDF to text, which you can get at this link. With a crude script I managed to export just the lines with phone numbers from John Lee and also from Mitch Englander, and you can get these at those links.

These are tantalizingly close to being importable as CSV, but unfortunately the OCR has just enough random spaces and dots that cleaning them up via script is non-trivial. For someone with my very limited skills, anyway. I’m working on it but also am assuming other people could do it better, which is at least one reason why I’m publishing the raw material! It’s like a treasure hunt, because I’m guessing that buried away in here are some awfully interesting facts. Let’s find those Easter eggs!

Image of City Staffer B is ©2020 MichaelKohlhaas.Org and here’s this from what will soon be seen as the good old days, a veritable golden age.