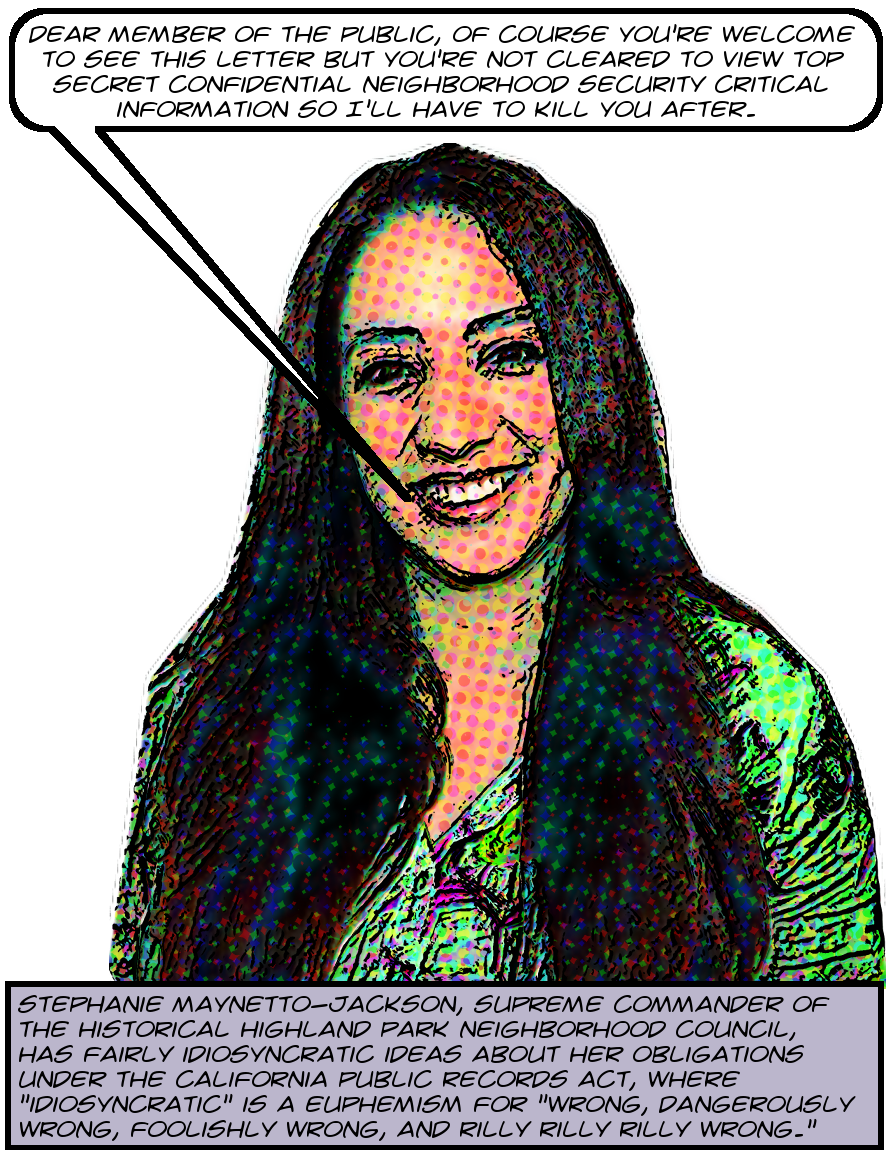 Tenochtitlan, The Wall That Speaks is one of the many murals in Highland Park threatened by gentrification. And HLP heroine Brenda Perez of Restorative Justice for the Arts organized a blessing ceremony, which took place last Sunday,1 to call attention to the peril into which the mural was tossed by Fig Crossing LLC’s recent purchase of the building.

The attention must have rattled the zillionaire Beverly Hills developers because the Thursday before the ceremony2 they had sent Historic Highland Park Neighborhood Council President Stephanie Maynetto-Jackson a letter stating that they did not intend to destroy the mural after all.

Apparently Maynetto-Jackson shared this letter with at least one member of the public because it popped up here and there on social media and eventually made its way via the world’s oldest field deputy and famous CD1 attack toad Bill Cody to Gil Cedillo’s Instagram.

And as word spread, well, other people wanted to take a look at this letter as well. So it came to pass that Perez asked Maynetto-Jackson for a copy but Maynetto-Jackson told her sorry, no, it’s confidential, you can’t see it.

Now, it’s a common misconception about the California Public Records Act that there’s some kind of formal process required to make a request for records. This is totally wrong. All that’s required is that a member of the public ask someone who has control over the records to let them take a look at them.

That’s a request under the law and the public official is required to respond accordingly. In particular, according to §6255(a), if they’re not going to give access to the record they must cite an actual exemption from the CPRA that authorizes them to withhold it. And as you may have guessed, “confidential” is not one of these.3

So yeah, it sure looks like Stephanie Maynetto-Jackson broke the law by refusing to hand over the letter. And meanwhile, it’s nice to have an informal non-binding promise from the zillionaire developers not to mess up the mural, but an actual contract, something with some teeth, is necessary. Let’s see what develops, shall we?

Image of Stephanie Maynetto-Jackson is ©2020 MichaelKohlhaas.Org and then of course there’s one in every crowd.