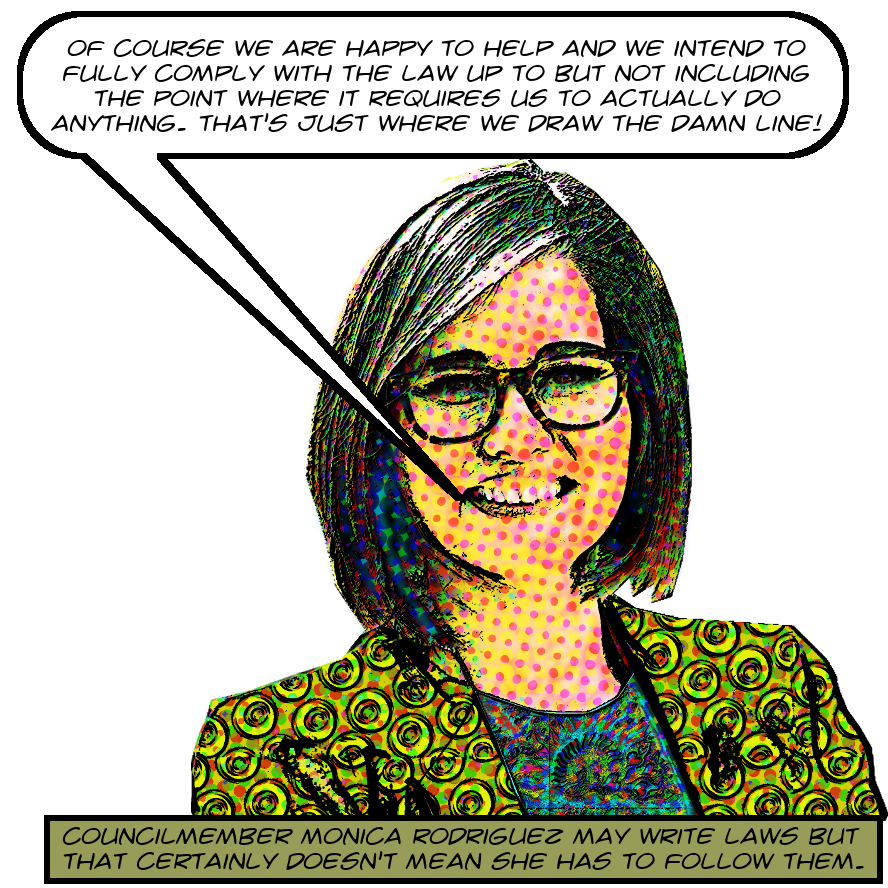 Last summer it was revealed that LAPD officers participated in various secretive vigilante anti-homeless Facebook groups. Stories ran in the press and LAPD Chief Michel Moore banned his officers from participating. At the time I was investigating the story through Public Records Act requests to various City departments, including all San Fernando Valley Council Districts.

Most of them complied, albeit reluctantly and with the usual idiotic foot-dragging obstructionism, but Council District 7, repped by Monica Rodriguez, actually just completely stopped communicating with me after some point. This is a typical tactic in the City of Los Angeles,1 and the only recourse provided by the law is to file a lawsuit seeking to compel compliance. So on Friday, January 17, 2020, assisted by fabulous and heroic attorneys Ian Stringham and Tasha Hill, that’s just what I did! Here’s a copy of the petition, and read on for transcribed excerpts!

1. Petitioner [Michael Kohlhaas] is a resident of Los Angeles, a professor at a local college, and an open records activist. Using CPRA requests to investigate and understand the activities of the Los Angeles City government, [Kohlhaas] makes all his findings freely available to the public through blogging and community events. His collection of records have helped both researchers and the public at large learn about the city’s response to the homelessness crisis, including students at U.C. Berkeley School of Law’s Policy Advocacy Clinic, and documentary filmmakers producing a film about the Greater West Hollywood Food Coalition. Records obtained by [Kohlhaas] have also been featured as part of an exhibit at the Los Angeles Poverty Department – Skid Row History Museum. Moreover, [Kohlhaas] has helped to empower the public by publishing a guide to the practical use of the CPRA in the City of Los Angeles. [Kohlhaas] is a member of the public within the meaning of §§ 6252(b)-(c).

2. Respondent City of Los Angeles is a local agency within the meaning of Government Code §6252(a).

5. This dispute arises from the failure of the City of Los Angeles to respond to a request for public records.

6. In the summer of 2019, it became publicly known that Los Angeles Police Department (“LAPD”) officers were participating in two private Facebook groups: “Crimebusters of West Hills and Woodland Hills” and “Homeless Transient Encampments of our West Valley.” Following numerous complaints by homelessness advocates about demeaning comments, anti-homeless sentiments, and promotion of vigilantism on both pages, LAPD conducted a formal investigation of officer participation in the groups.

7. On July 16, 2019, Petitioner made a records request through email on Respondent pursuant to the CPRA. He sent the email to Tran Le, the Director of Communications for CD7 Councilwoman Monica Rodriguez. The request sought for emails between Councilwoman Rodriguez and CD7 staff regarding officers and private citizens who are known to have participated in these Facebook groups. The request specified a timeframe, specified a list of senders and receivers, and specified a series of keywords to search for.

8. On July 16, 2019, when Petitioner received an automated away message from Ms. Lee, Petitioner immediately forwarded the request to CD7 staff members Doug Tripp and Denaee Amaya per by the away message’s instructions.

9. Ms. Le acknowledged receipt of the email on July 19, 2019. She estimated that, due to the “volume of the search terms” Respondent would provide an answer as to whether or not responsive records existed by August 9, 2019, 21 days later.

10. Given that the response time was outside of the typical 10-day CPRA response deadline, Petitioner assumed Respondent was implicitly extending the deadline by an additional 14 days as allowed for by CPRA § 6253(c) in “unusual circumstances.”

11. On August 23, 2019, 35 days after his initial request and 11 days after expiration of the 14-day extension, Petitioner had received no response and emailed Respondent regarding the status of his request. Petitioner also sought clarification as to how the “volume of the search terms” amounted to a reason for delay, as the, “City’s Gmail system can be searched for multiple keywords in a single operation, so that there is no practical difference between searching for one keyword or a thousand.”

12. On September 16, 2019, 58 days after his initial request and 34 days after expiration of the 14-day extension, Petitioner had not received any response and emailed regarding the status of his request.

13. On October 7, 2019, 80 days after his initial request and 56 days after expiration of the 14-day extension, Petitioner had still not received any response and again emailed regarding the status of his request.

14. Since Respondent’s July 19, 2019 email, Petitioner has not received any response from Respondent regarding his July 16, 2019 CPRA request.

1. That the Court issue a peremptory writ of mandate directing Respondent to make all requested documents available for inspection and provide a quote for direct costs of duplication of the records within 10 days of this Court’s order directing that they do so;

2. That the Court enter an order awarding Petitioner his costs of suit and reasonable attorney’s fees and costs incurred in bringing this litigation;

3. For such other relief as this Court deems just and proper.

Image of Monica Rodriguez is ©2020 MichaelKohlhaas.Org and here’s another clue for you all…