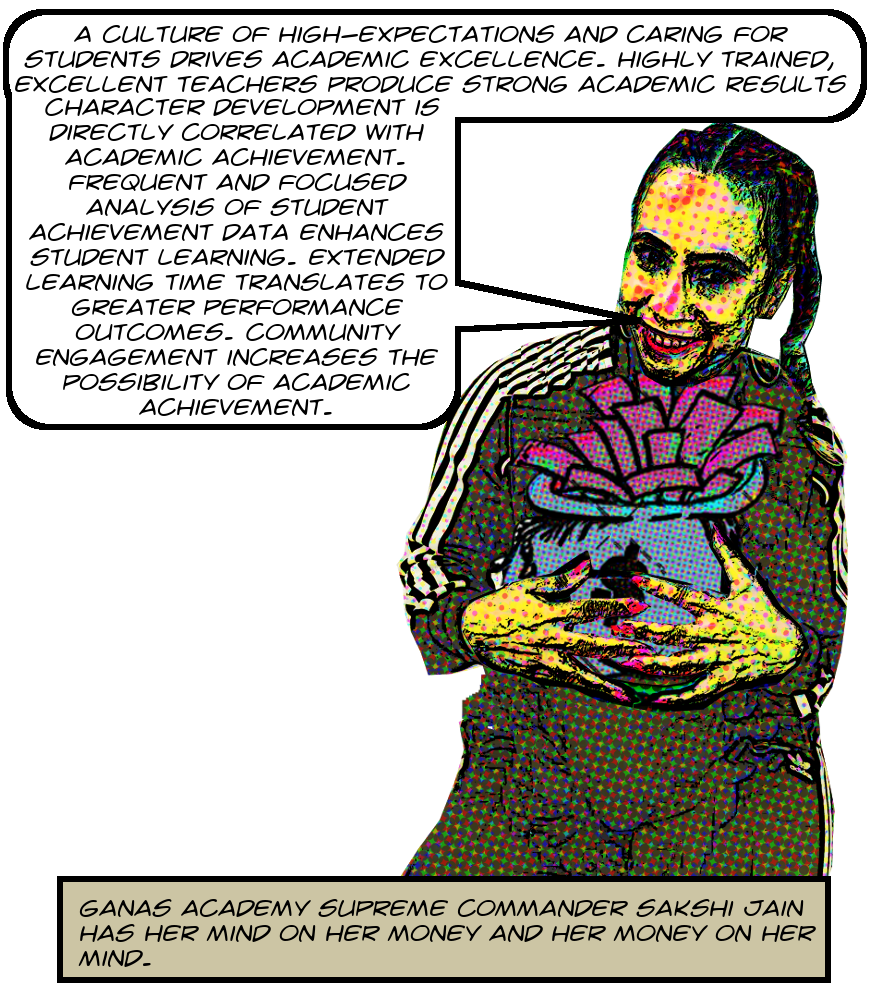 I’m spending some time trying to understand the finances of from-scratch charter school startups authorized by LAUSD. In particular, for a number of reasons, I’m looking closely at GANAS Academy, an amateurish little effort, slated to open in Fall 2019 but which for various reasons did not. I previously learned that the would-be founder, Sakshi Jain, kicked things off with a $325,000 grant from the Walton Family Foundation. And very recently I received a number of records that show that she also received a $475,000 grant from the California Department of Education.

It may be that these two amounts aren’t additive, because, according to the award letter, the CDE grant is “reimbursement based.” It’s at least plausible that this means the Walton grant was given to cover expenses that would be reimbursed by the DOE, although I have no proof (yet) either way. I just don’t have enough information to understand exactly how much money total was involved in the abortive debut of GANAS, but it was an awful lot. And I previously showed that Jain paid a recruiter $850 per kid enrolled. One of these records shows that she was paying the guy out of CDE funds.1 I’m not sure if this is legal, but a charter school in San Diego is getting really bad press right now for doing the same thing.2

However, as interesting as it is, tracking what became of the money is not the most interesting information to be gleaned from this set of records, available here on Archive.Org. Neither is the weird and illegal crap she spent it on. That’s to be expected from such a grifter. What’s really interesting is the story of how this callow, this jejune little nobody, Sakshi Jain, with not an original idea in her head, without significant training, no demonstrated ability to do anything, can basically slap together a bunch of idiotic copypasta and be awarded a charter school and around half a million dollars in money from the state. And what’s worse, given actual responsibility for actual human children.

How anyone can look at this woman’s plans and proposals, can see the money everyone’s throwing at her, and still manage to think charter schools could ever be a good idea I will never understand. Sakshi Jain and her backwards, pernicious little project are not some kind of fluke, it’s no accident that she was able to do this. Everything’s working as it’s meant to work for her. This stupid, harmful little school is precisely one of the things that the system is designed to allow.3 Read on for links to the records, descriptions, and even some snide commentary!

Together these two items comprise 28 pages of the most egregious, most meaningless nonsense going. This nonsensical heap of crap purports to explain how the school will be run, what their educational program is based on, how the board of directors will function, and so on. But it has no relation to anything real, anything actual. It’s copypasted from a zillion equally idiotic propaganda pieces about inno-freaking-vation. It’s like Jain thinks if she puts the word “excellent” in every sentence then something excellent is bound to result. Here are some fairly random selections, but really, every sentence is as moronic as these. Like I said, how anyone at all could read this and decide to give this lady half a million bucks is beyond me. She actually seems to believe that saying things makes them become true, like a child or a lunatic or a lunatic child.

Our curricular sequence and long-term plans are comprised of daily lessons that teach to mastery, rigorous weekly assessments that assess the level of mastery towards those taught and practiced standards, and daily intervention supports that target individual student needs. Every component of our curriculum is measurable, allowing staff to advance individual and collective academic progress and growth and ensure that we are measurably on track to meeting the clear and ambitious goals outlined in the charter petition.

★ Approved budget for the startup grant

This is a fairly detailed account of what they’re planning to spend the $475K on. Mostly salaries, and take a look at that of course. But also Chromebooks for each student for a total of $42K and $15K for recruitment. It’s not clear from this record that some of this money is going to bounties paid to Al Flores, but this other budget makes that explicit. But all that nonsense pales next to this $48K to be paid to some bunch of shamsters known as Lavinia Group, who Jain is paying $75K to to design her freaking curriculum.

If you ask the privatizers they will tell you that we need charter schools because they’re innovative, nimble, original, whatever. If any of that is true why is this one paying some third party to design the curriculum. If having a pre-designed curriculum is enough to bring all the putative benefits of charter schools to their young victims, why don’t we just cut out the middle and hire freaking Lavinia Group to design public school curriculums? It is completely insane. Why is Jain able to do this? Not only does she have no qualifications she even knows she has no qualifications, otherwise why is she spending public money to pay other people to do a job she’s supposedly uniquely qualified to do?

Curriculum Design & Support Consulting: Lavinia Group will help to support building out our Common Core Aligned Curriculum in literacy and math and provide professional development to ensure that it is executed at a high level. The entire fee is $75,000, the difference will be covered by other funding. $47,842.08

Anyway, that’s the flavor of this stuff, but look at all of it. There are other hidden horrors in there that I can’t bring myself to write about. But really, it’s not just the sheer waste of money, giving half a million dollars to this nothing little person, no skill, no talent, no vision, not an original thought in her head, so she can hire a bunch of scam artists like herself to cobble together some crap. Not just that, but the fact that the end result is handing over actual human children to her, putting them in her care. It’s not OK, not acceptable, and I cannot see how anyone who knows what’s going on can allow it.

Image of Sakshi Jain, Supreme Commander of GANAS Academy, the little charter that couldn’t, is ©2019 MichaelKohlhaas.Org.