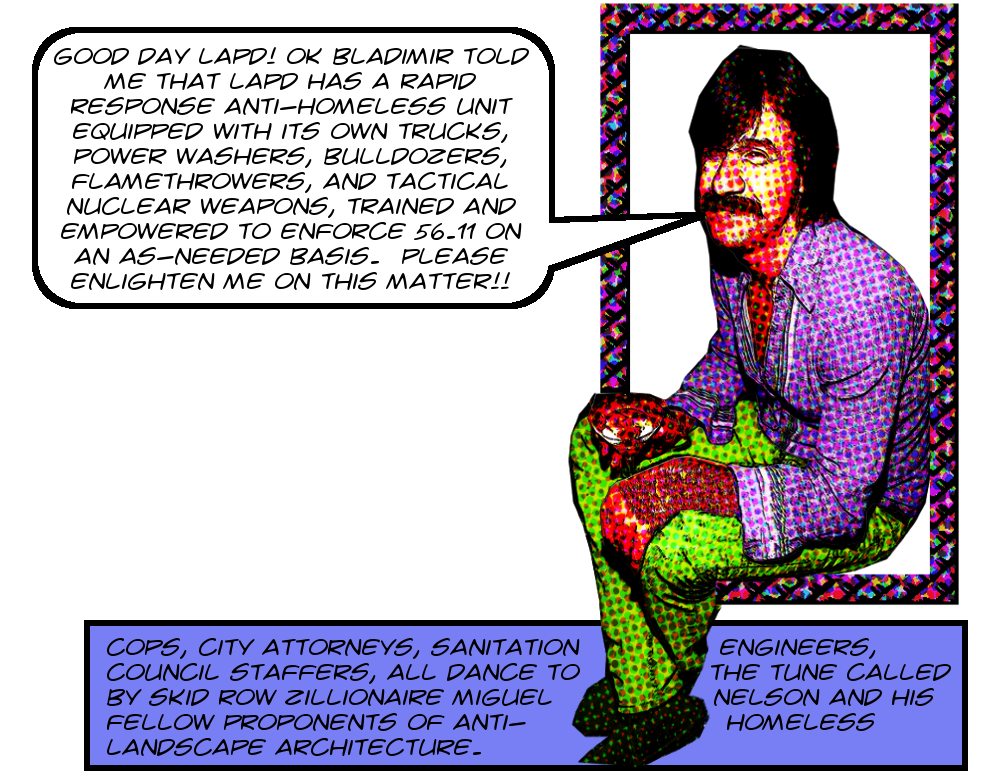 I recently obtained part of a vast set of records from the LAPD, comprising emails between four officers and a long list of people involved with homeless issues on Skid Row as well as a wide variety of other materials which was attached to the emails. The officers are Marc Reina, Aloaf Walker, Robert Arcos, and Keith Bertonneau. Their correspondents are many, but in particular property owner Miguel Nelson, deputy city attorneys Kurt Knecht and Gita O’Neill, and LA Sanitation staffer Bladimir Campos.

This is an incredibly rich, incredibly complex set of material. The whole thing, or as much as I have so far as I am told there is more to come, is here on Archive.Org. There are many, many enlightening stories to be told from these sources, and I will be posting on some of them over the next few days.1 Also, I hope to publish a list of some of this stuff soon with brief descriptions. But I have extracted one important story for you this evening.

There’s been a lot in the news lately about anti-homeless planters in Venice of one sort or another, installed illegally and passively tolerated or even actively assisted by the City of Los Angeles. But the latest round of weaponized agriculture started last year in Skid Row with the so-called North Sea Project, which also involved giant heavy planters taking up the sidewalk to prevent people from sleeping there.

This North Sea installation was guided mostly by local property owner Miguel Nelson.2 According to KCRW Nelson obtained permits from the City for his hostile landscaping, unlike the copycats in Venice. The purpose of these planters, anti-homeless and pro-gentrification, was widely reported in the international press. Even the SRNC Formation Committee’s own General Jeff weighed in on the anti-human motivation behind these abominations.

But what I haven’t seen reported on anywhere is the astonishing level of City complicity in the installation of these Skid Row planters, which exceeds at least what we know about parallel issues in Venice.3 The evidence shows that the City of Los Angeles conspired with Miguel Nelson to coordinate the installation of sidewalk fencing on the east side of Towne Avenue between Fourth and Fifth streets with an Operation Healthy Streets raid.

Bladimir Campos of LA Sanitation gave Nelson five days advance notice of the cleanup so that he would have time to schedule his fence crew to barricade off the public sidewalk to prevent encampments from returning before he had a chance to install the planters. Note that five days is even more notice than the people living in the encampment got! Further, on the day that the cleanup crew was working Campos instructed his subordinates to give Nelson real-time estimates of their arrival. There’s no reason to suspect that this level of cooperation wasn’t in play through the whole North Sea installation process.

This is in sharp contrast to the City’s refusal, which continues to this day, to give homeless rights advocates advance notice of cleanups so that they can be observed and recorded. Interestingly, the City is expressly forbidden by the California Public Records Act from releasing or refusing to release information based on the purpose it’s to be used for,4 and yet that is exactly what they’ve done in this case by releasing it to be used against homeless people but withholding it from those who would use it to defend their rights.

It’s also in sharp contrast to the City’s stated purpose for Operation Healthy Streets, which like most5 such tools placed in the hands of the City has been weaponized to serve the interests of property owners. The mission at one time seems to have been fairly humane. Nothing to do with clearing out encampments so that property owners can colonize the space with planters:

Operation Healthy Streets (OHS) was implemented in 2012 as a robust homeless community outreach program designed to provide adequate notice and identify high-risk people in need of services and assistance.

As always, turn the page for links to and transcriptions of the actual evidence.

This little slice of life begins on March 23, 2017, when Miguel Nelson sent this email to Bladimir Campos and officer Aloaf Walker:

hello sgt walker and bladimir, please confirm that next tuesday 3/28 is operation healthy streets on towne ave between 4th and 5th street? we will be fencing the east side of the sidewalk as you clean, same as we have already done on the west side, i’d like to coordinate this group effort as efficiently as possible, should go much faster for OHS since the west side is already free of camps and sidewalk has already been pressure washed.

please let me know the best time to have my fencing crew there, i tentatively have them scheduled for 10am.

oh, i will post our sidewalk fencing permit tomorrow morning giving everyone at least three days to move.

btw… we also need to fence the north sidewalk along 5th just east of 4th for about 150 feet, when is operation healthy streets cleaning that?

And Campos replied just over an hour later6 with this little missive, not only confirming the time and date of the cleanup operation, but instructing his subordinate to inform Nelson roughly what time during the ongoing operation they expected to arrive at the location of interest to Nelson:

Please advise ETA time to clean up Towne Ave between 4th and 5th St on March 28th. Thank you.

On the Road to Zero Waste!

And even this information, so much more than what you and I are able to get out of LA Sanitation, was not enough for Miguel Nelson. Thus on March 27, 2017, the day before the scheduled cleanup, Nelson emailed Campos again:

From: mglnlsn@gmail.com on behalf of miguel nelson

hello bladimir. do you know the eta for tomorrow?

And the next day Campos arranged for yet another subordinate to call Nelson, and emailed Nelson to let him know that this was happening:

Michael Miller will call you to provide ETA .
Kind regards,

On the Road to Zero Waste!

And we know that everything went just as planned, because later that day, at 12:48 p.m. on March 28, 2017, Nelson emailed Campos to thank him and let him know that they did install all the fence. And because zillionaires didn’t get to be zillionaires by being satisfied with what they have, he also had a bunch more complaints to register:

From: mglnlsn@gmail.com on behalf of miguel nelson <miguel@marvimon.com>
Sent: Tuesday, March 28, 2017 12:48 PM
To: Aloaf Walker;BLADIMIR CAMPOS
Subject: thank you for this morning

hello sgt walker and bladimir. thank you for your cooperation this morning, we successfully cleaned our block with OHS and fenced the remaining portions of our sidewalks for ongoing building maintenance.

we still have two issues:

1. there is a homeless camp at the corner of our construction site beneath our scaffolding at 4th and towne. this is dangerous and in our way as we pour concrete, load and unload steel, etc. we have both a sidewalk permit and a street use permit, please do everything you can to move this camp off of this block.

2. we still need to fence the north section of 5th street east of towne avenue for approx 150 feet. OHS wasn’t prepared to help us with this today, we have had our permit posted in that area since friday. could you please coordinate this sidewalk clearance with us tomorrow morning?

Now Miguel Nelson is asking for a whole new level of service. It’s a quantum entitlement shift. Recall that the first fence-facilitating cleanup7 was scheduled at least five days in advance. The City’s complicity there was at least provably limited only to giving Nelson advance notice so that he could arrange to have fence installers present. But now Nelson wants them to send out a crew the very next day. Nelson claims that he posted the area for cleanup in a timely manner, but interestingly, he did finally manage to ask for too much, at least as far as officer Walker was concerned. Walker responded thusly:

As you know, LA San will have to be the lead with this request. They may have to post as well.

And, typically, Nelson doesn’t know when to leave well enough alone. He tries to splain to officer Walker that despite officer Walker’s theories, he’s nevertheless wrong about everything. For extra influence-juice, Nelson adds neighborhood prosecutor Kurt Knecht to the CC list, as if everyone who works in a bureaucracy hasn’t been on to this padding-the-CCs trick since forever:

my understanding is that sanitation has given LAPD the resources for this? anyways, he’s in an area that is dangerous construction zone with sidewalk and street use permits, please help us asap. plus, he’s breeding pit bulls and has much more than 60 gallons, maybe 360 gallons and much of it is even stacked in the street in a commercial loading zone where we have our street use permit.

And after that no one answered him, so he was reduced to sending begging emails at 5 a.m. into the void. This is where tonight’s episode ends, but as you’ll see if you read through the records or wait until I write some more, Miguel Nelson may not have gotten everything he wanted here, but he got more than non-zillionaires could ever get, and later he got ever so much more. Anyway, here’s the last gasp:

sgt walker, the camp at our construction corner is not only still there, but has grown over night, they are breeding pitbulls, obstructing our sidewalk, have piles of camp building materials in the street, not to mention an indecent amount of human feces and dog feces, our construction begins this morning at 7am. we need to be able to unload vehicles and carry materials along this path, our seafood neighbors also use this path to transport goods to and from each other, could we please move them by then? they are located where we have our sidewalk use permit and our street use permit.

sorry again to have to ask you for these types of services, miguel